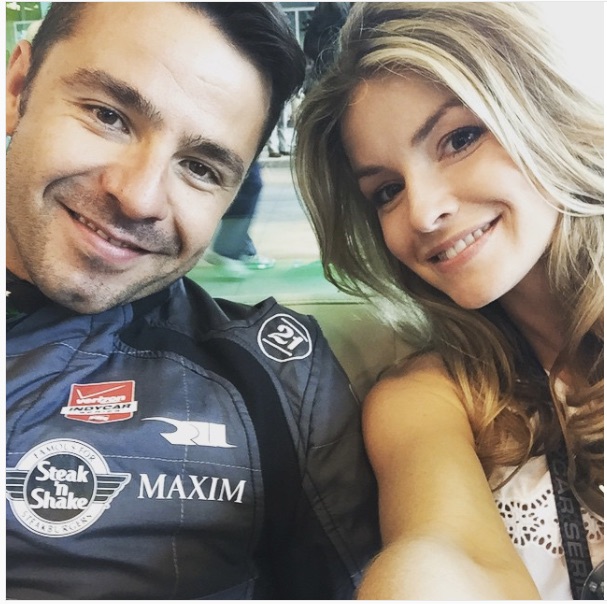 UPDATE The final practice session has completed. No major incidents before the last race of the season. Max Chilton did cause a red flag during the session. AR1 is not sure what the teams were working on during this final practice session but looking at the final practice times, speed was not the main focus of this session. It will be interesting to see the type of tires the teams will use for the race today. Firestone made the primary, black tire for this race more durable than the 2016 Sonoma compound. The 2017 alternate (red) tire is similar to the 2016 primary compound.

On a lighter note, Oriol Servia, the Honda test driver for the new IndyCar for 2018, and Jaclyn Becker were married yesterday. AR1 does not have all the details but the couple is expecting their first child in the next few months. Congrats to the happy couple.

09/17/17 It is a bittersweet morning here at Sonoma Raceway where the final race of the season will be run today. The weather has been perfect this weekend, except for some wind conditions that the drivers had to contend with. It is currently 50 degrees but we should warm up into the low 80s by race time.

Today's race will determine the IndyCar championship for 2017. The champion has been decided the last 12 season at the final race.

"I was just hoping we could get one of these (Verizon P1 Awards) this year," said Newgarden, whose only previous pole came at Milwaukee in 2015. "We've been close a couple times and a couple places I felt like we had the speed to do it and didn't get it done.

"It's cool because this is the Verizon P1 Award and I've been driving the hum by Verizon car many races this year, and I haven't been able to get it in its place."

Team Penske will be the team to beat. All four of the drivers, Newgarden, Helio Castroneves, Simon Pagenaud and Will Power, have won a race this season. Between the four drivers, the team has won nine races and ten poles this season.

Helio Castroneves said it best in the post qualifying press conference yesterday. "Team Penske, we're throwing everything out there. We wanted this championship as bad as anybody. We do have a chance. We going to obviously try to execute. That's our goal."

The one driver to threaten a Penske championship is Scott Dixon. Dixon was the only driver to reach the Firestone Fast Six at all nine road- and street-course events where it was conducted this season.

Qualifying sixth for today's race, Dixon was upbeat with his starting position. "The car was kind of decent to drive, but just couldn't carry the speed through the corners," said Dixon, seeking his fifth Verizon IndyCar Series championship.

"Good to make it through to where we did," Dixon added. "It was definitely hard work, a big credit to the team. Sixth position, you can definitely make lots happen from there. I think in '15 we started ninth when we won that race (and the championship). Definitely you'd want to be a little further up, but that's the way it goes."

We spoke with Beth Boles, Christian Daly's mom, yesterday in the paddock and inquired as to how the younger brother of Conor was doing after fracturing his right leg while competing at the P1AquaX National Watercross Championships last week. Boles said he was doing fine and should be in a walking cast in four weeks.

We will keep you updated as things happen.