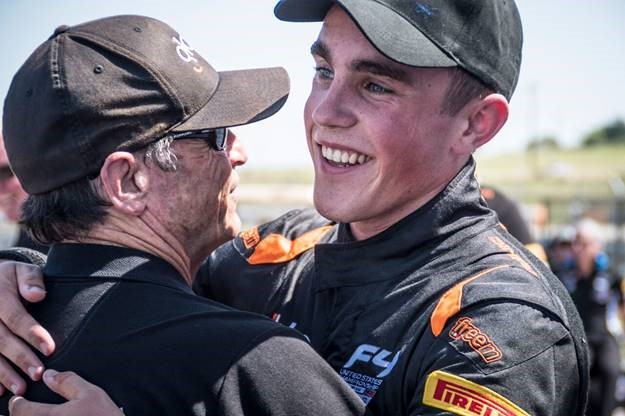 Global Racing Group pilot Benjamin Pedersen of Copenhagen, Denmark, dominated Circuit of the Americas Friday, winning both races and capturing pole position in qualifying and in Round 16. This was the highest finish for Pedersen in his two years of competing in the Formula 4 United States Championship Powered by Honda.

“I wasn’t expecting this going into the weekend," said Pederson. “The set-up of my DirtFish F4 car really transferred over nicely from Virginia International Raceway, so when we got here we were already on a high level of being competitive. I practiced for hours on the simulator, increased my training, adjusted my driving style and studied the track with my two driver coaches to prepare for the race weekend. It would really be nice to get the third win tomorrow."

Pederson only lost the lead once in two races, falling second to Dakota Dickerson of San Diego in the first lap of Race 1. Pederson recovered to regain the lead after contesting Dickerson on the restart.

In just his second F4 U.S. event of the season, Eves, captured two podium finishes. Eves has not competed in F4 U.S. since Event 2 at Indianapolis Motor Speedway where he also claimed two podium spots and a top-five finish.

“It feels great to be back in the F4 U.S. car," Eves said. “Jay Howard’s Motorsport Driver Development has the car working really well. I’ve been karting with the MDD team to keep fresh, but to prepare for this race I’ve increased my training in the gym and practiced on the simulator."

With three races left in the season, Kirkwood clinched the season after Raphael Forcier of Montreal, who was challenging Kirkwood for the championship in second-place, finished just outside of point-position in both races. Kirkwood scored a pair of podium finishes which allowed the Cape Motorsport driver to comfortably secure his season.

“It is defiantly a relief to have won the championship with so many races still left in the season," Kirkwood said. “We can relax a little bit and have some fun with different car set-ups. My goal now is to help my teammates get on the podium."

Ben Waddell of Denver ended his five-race slump, collecting points in both rounds with a top-10 finish in Race 1 and a top-five finish in Race 2. Kory Enders of Warwick, New York, also had a break-out weekend. The DeForce Racing pilot claimed the second fastest lap in Race 1 which allowed him to start Race 2 on the front row beside Pedersen. Enders dropped back in the field, but finished just outside the podium less than half a second behind Kirkwood.

In an unexpected event, a school bus interrupted the second F4 U.S. COTA round, driving onto the track in the middle of the race. No one was injured and SCCA officials quickly issued a red flag, signaling drivers to pull into the pits until the track was deemed safe for return. It is still unclear how or why the bus was on the track, however, school buses are used at COTA to collect marshals at the end of the day.