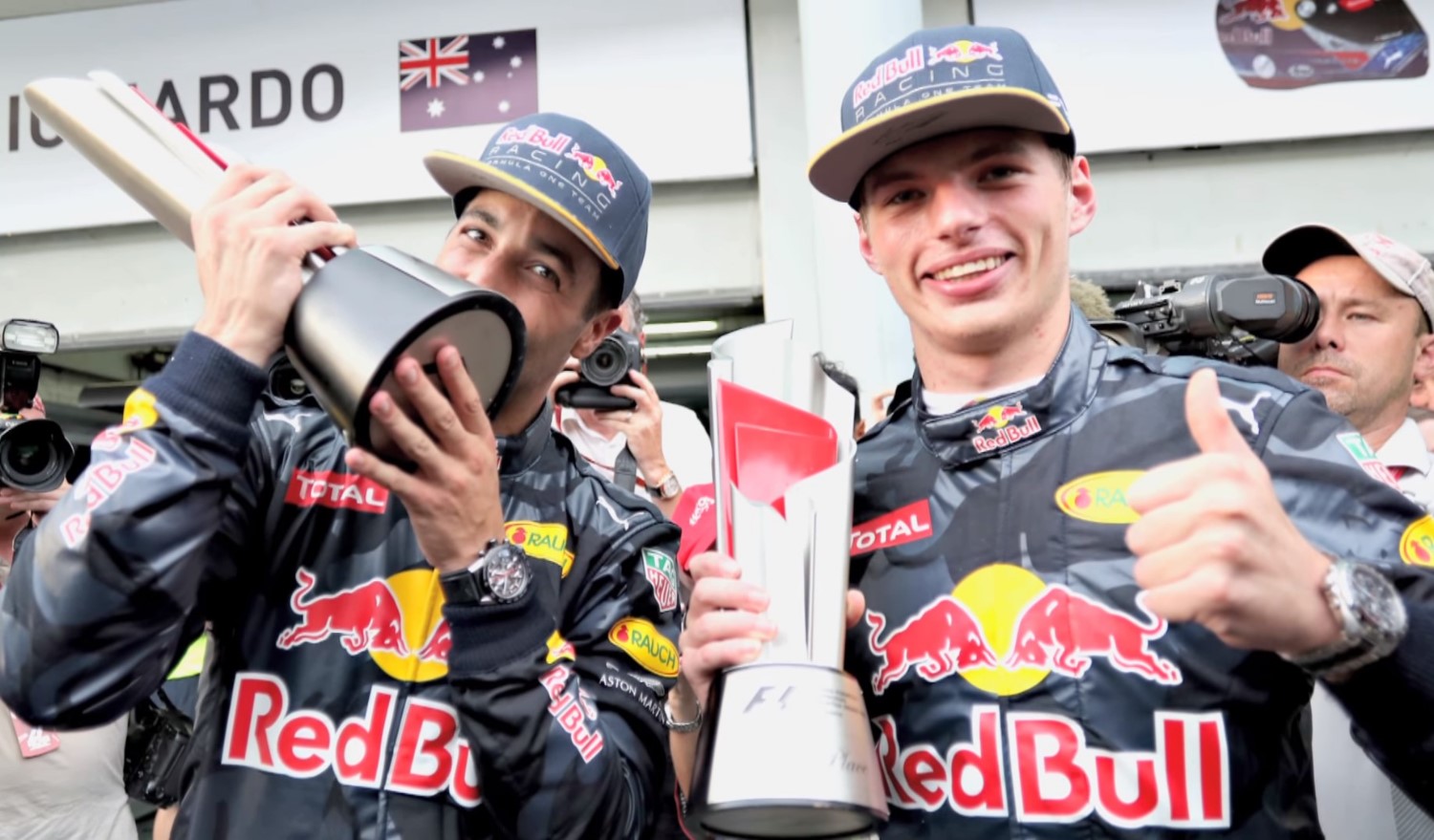 The Australian has driven for the team since 2014, and before that Red Bull's junior outfit Toro Rosso.

But he told the Sun newspaper that as he will be out of contract at the end of next year, his desire to win means he might consider leaving the Red Bull camp.

"We have still managed to get podiums but we haven't realistically been in the championship hunt so it really needs to happen with Red Bull next year — at least from my point of view," 28-year-old Ricciardo said.

"I've been here for quite a few years now and I think next year we need to make a bigger step next year than we did this year, to really convince me that I can win with them."

Ricciardo said he would like Red Bull to step up with a winning car next year so he could "complete the story" after being groomed by the energy drink company.

"Do I want to win with them? Absolutely. I think that would complete the story as well. Seb got to complete it — he is the only guy. So my heart would love to. But we will see," he said.

"I have got decisions to make once my Red Bull contract is up. It is the first time in my professional career that I've been a free agent.

"The next contract I sign, whether it is an extension or a new one, it is unlikely to be for just one year, it is probably three years. So that is a big part of the next step in my career," Ricciardo added.

(GMM) A new one-year contract for Valtteri Bottas has kindled fresh speculation Max Verstappen could be headed to Mercedes for 2019.

Team boss Toto Wolff, who admits to having coffee with Red Bull driver Verstappen's father Jos at Monza, confirmed that Finn Bottas' newly-announced deal is for 2018 only.

"We are very happy with Valtteri and have therefore extended with him for 2018," Wolff told Bild newspaper.

19-year-old Verstappen has made clear his displeasure with Red Bull this season, but is believed to be firmly under contract not only for 2018 but also 2019.

But for now, Mercedes has re-signed with Bottas and that news was welcomed by his fellow Finn and former F1 driver Mika Salo.

"Almost from the beginning, Valtteri has shown he can win races when Lewis cannot, so he is just perfect for the job," Salo told the Finnish broadcaster C More.

Salo also said it is understandable that Mercedes has opted for just a new one-year deal for Bottas.

"Maybe they want that big name (for 2019)," he said. "This year the driver market has also been a bit strange, with almost no changes. The quietest for some time."

And so Salo thinks 2018 is Bottas' big chance to shine.

"This year he's been driving Lewis' car basically, and that won't be the case next year when he should be able to win races right from the beginning," he said.

(GMM) F1 legend Alain Prost says it's "a scandal" that Sebastien Buemi is no longer on the grid.

Also in July, there were rumors Renault advisor Alain Prost wanted the French works team to consider Buemi for 2018.

However, Renault is understood to have decided to pair Carlos Sainz with Nico Hulkenberg next year.

But Prost told the Swiss newspaper Blick: "It is a scandal that Buemi is no longer in F1.

"He is still one of the fastest drivers in the world."

(GMM) Sebastian Vettel could reclaim his lead of the world championship this weekend in Singapore.

That is the view of Marco Tronchetti Provera, who is the CEO of F1's official tire supplier Pirelli.

The Italian admits that although Pirelli remains neutral, he is happy Ferrari has caught up with world champions Mercedes this year.

"Ferrari not only closed the gap but has also proved able to beat Mercedes," he told Italy's Sky.

"Ferrari is faster at city circuits where the top speed is lower, while Mercedes has a small advantage when the speeds are higher.

"So I think Ferrari can do a nice race in Singapore," Tronchetti Provera added.

"Ecclestone did extraordinary things," he said. "Without him there would be no Liberty Media or formula one.

"But the new owners have great marketing experience and can do great things, especially in terms of new media," Tronchetti Provera said.

(GMM) Mercedes has now backed Red Bull in pushing for a change to the engine rules for 2018.

Earlier, with swathes of penalties raining confusion over the order of the grids at recent races, Red Bull's Christian Horner argued for a change for next year.

In 2018, drivers are scheduled to make do with just 3 engines for the whole season rather than the current four, but Horner argues for the status quo.

Mercedes team chairman Lauda agrees that the scheduled change from 4 to 3 engines is "a mistake by the strategy group".

"Everyone said that the engines could only be cheaper for customers if we build less," he told Auto Motor und Sport.

"But we have known for a long time now that nothing will be saved with the 3 engines," Lauda added. "Because the development on the test stands actually costs more."

Another major controversy surrounds how the FIA penalizes the drivers after their allocation of engines is exhausted for the season.

Even F1 chief executive Chase Carey admits that the grid penalty confusion is not ideal.

"The penalty structure clearly has gotten to a place that nobody says is functioning the way we like," he is quoted by AFP news agency in Singapore.

"Then we had the better part or half the grid with some sort of penalty that nobody could understand at Monza.

(GMM) Daniil Kvyat says he is happy to wait for news about his future in F1.

The Russian touched down in Singapore for this weekend's race fielding questions about his Toro Rosso teammate Carlos Sainz's strongly-rumored switch to Renault.

"It's perfect for me," Kvyat smiled. "I don't have to answer any stupid questions."

It is rumored Singapore could actually be Kvyat's last race alongside Sainz, with the Spaniard set to replace Jolyon Palmer from Malaysia next month.

Asked how he feels about farewelling his teammate, Kvyat smiled again: "Very sad. See my tears?

"Whatever happens, sooner or later at some point, you might see us again together. But I don't know what's going to happen. It's his future, not mine," Kvyat added.

However, Kvyat's own future is also uncertain, although it is believed that with Sainz departing, Toro Rosso will keep him on board as Pierre Gasly joins as a rookie.

But the 23-year-old said Toro Rosso has the more important issue of its engine partner to settle first.

"I think first of all the team must deal with its own future," said Kvyat.

"I think as soon as that is clear, I'll get the news. But I'm not worried about the situation," he insisted.

"The sooner I find out the better, but I will not pressure the time at this difficult time.

"I am an understanding person so I'll let them focus on what is most important.

"As long as there is no official confirmation about the contract with Honda, I will not say anything about it. But whatever happens I think will be good for the team," Kvyat added.

That is despite the fact it is believed McLaren will imminently confirm its split with the Japanese engine supplier, after three years of struggle.

However, even FIA president Jean Todt and Liberty Media's Ross Brawn are believed to have intervened, in order to help Honda find a way to remain in F1 beyond 2017.

It is believed Honda will power the junior Red Bull team Toro Rosso from 2018.

"As long as there is no official confirmation about the contract with Honda, I will not say anything about it," said Toro Rosso driver Daniil Kvyat in Singapore.

"But whatever happens I think will be good for the team."

"Honda's a very important partner," he said at a sports conference in Singapore.

"I had meetings with Honda executives around Monza," the American added.

Carey also revealed that he disagreed with ousted F1 supremo Bernie Ecclestone over the future of the sport.

Carey said F1 is unlikely to return to places like Korea and India.

"We had races there but they were one-off deals for the day, not aimed at developing the sport in those countries," he said.

Ecclestone: McLaren no happier with Renault

McLaren will be no happier with Renault than it has been with Honda, ahead of the team's impending switch of engine supplier, according to Formula 1 Chairman Emeritus Bernie Ecclestone.

McLaren is poised to sever its ties with Honda at the end of the season, following three years blighted by poor reliability and performance, in which it has taken a best race result of fifth.

McLaren will instead move across to using Renault power units, with Toro Rosso in line to switch to Honda, enabling the Japanese manufacturer to remain in Formula 1.

The engine deals are set to trigger announcements in the driver market, with Fernando Alonso to stay at McLaren, Carlos Sainz Jr. to move to Renault, allowing Pierre Gasly to slot in at Toro Rosso.

Ecclestone, though, while believing Alonso's deal is "super news", does not feel McLaren's mood will be improved by its switch of power unit partners for 2018.

"The Renault deal is all done, Alonso staying is super news," Ecclestone is quoted by the Daily Mail.

"But I can't see why McLaren will be any happier with Renault than they are with Honda.

"It wasn't Honda's fault things didn't work out, it was McLaren's.

"Every day they had a fight about everything, instead of working with them, which was a little bit stupid."

McLaren currently holds ninth position in this year's Constructors' Championship, having scored points only in Azerbaijan and Hungary.