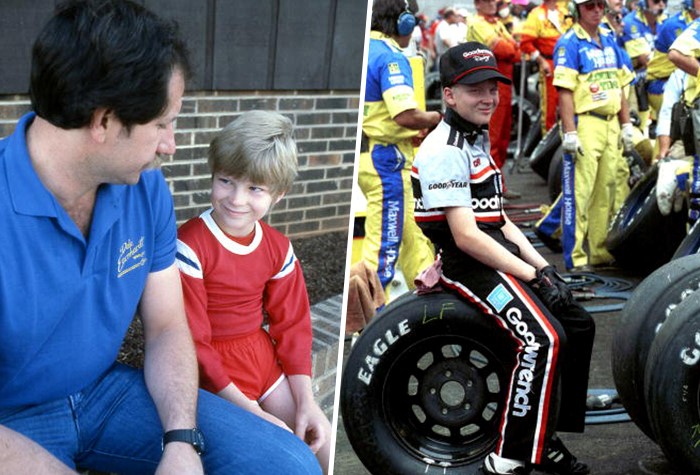 TALLADEGA, AL – What do spark plugs, brake cleaner and go karts have in common when it comes to Dale Earnhardt Jr. and Talladega Superspeedway? They’re what occupied the majority of his time when he visited the enormous 2.66-mile track as a kid, years prior to winning six races, including a record four straight.

Earnhardt Jr., who will be vying for his seventh TSS win in the Alabama 500 Monster Energy NASCAR Cup Series (MENCS) race on Sunday, Oct. 15, has always had passion for Talladega and its extraordinary style of “Super" Superspeedway racing, but it was actually ignited as a youngster in the late 1980s and early 1990s.

While his father, Dale Earnhardt Sr., was racking up wins at Talladega, an eager Dale Jr. tagged along. Whether it was racing go karts in the nearby city of Oxford, AL or scavenging for 'treasure' in the TSS garage, Earnhardt Jr. always seemed to have something to do while his father was intimidating the competition on NASCAR's Most Competitive track.

When he wasn’t tearing up the go kart track, Dale Jr. and his pals were on the hunt in Talladega’s massive garage area – scavenging for whatever they could find from more than 40 NASCAR teams.

“I was in awe about how many brand-new spark plugs the teams would leave laying around the garage," Dale Jr. said. “Brand new bottles of brake cleaner and glass cleaner were just discarded. Back then, during the race, the teams took everything they needed to the pits. What they would leave behind would be new spark plugs and brand-new cans of this, that and the other…. all kinds of stuff just laying around. Me and my buddies would box it up or carry it over to Jimmy Means' truck so they could take it home. I don't even know if Jimmy cared, but we thought we were doing something cool. We did that (at the track), and even begged people to let us wax their race cars and whatever we could get ourselves into."

Dale Jr. has come a long way from being the ambitious kid in the garage. In 1998, he made his first Talladega start in the NASCAR XFINITY Series, then two years later in 2000, debuted in the MENCS. Now, NASCAR’s 14-time Most Popular Driver hopes to wind up in Talladega’s Gatorade Victory Lane in the upcoming Alabama 500. It’s his final start at the track he calls "a second home" because of so many great memories he made on and off the track. A victory would place him second on the track’s all-time MENCS win list – trailing only his father – who has 10 triumphs.

Talladega’s fall event weekend kicks off Friday, Oct. 13 with a full slate of on-track activity, including practice sessions for the Alabama 500 and fred’s 250 Powered by Coca-Cola NASCAR Camping World Truck Series (NCWTS) event, both of which will play major roles in NASCAR’s Playoffs. Saturday’s fred’s 250 Powered by Coca-Cola, where the field of eligible championship contenders will be trimmed from eight to six at the checkered flag, is set for a 12 Noon (CDT) start, while Sunday’s Alabama 500, the “Wildcard" second race in the Round of 12 of the Cup Series playoffs, will get underway at 1 p.m. (CDT).