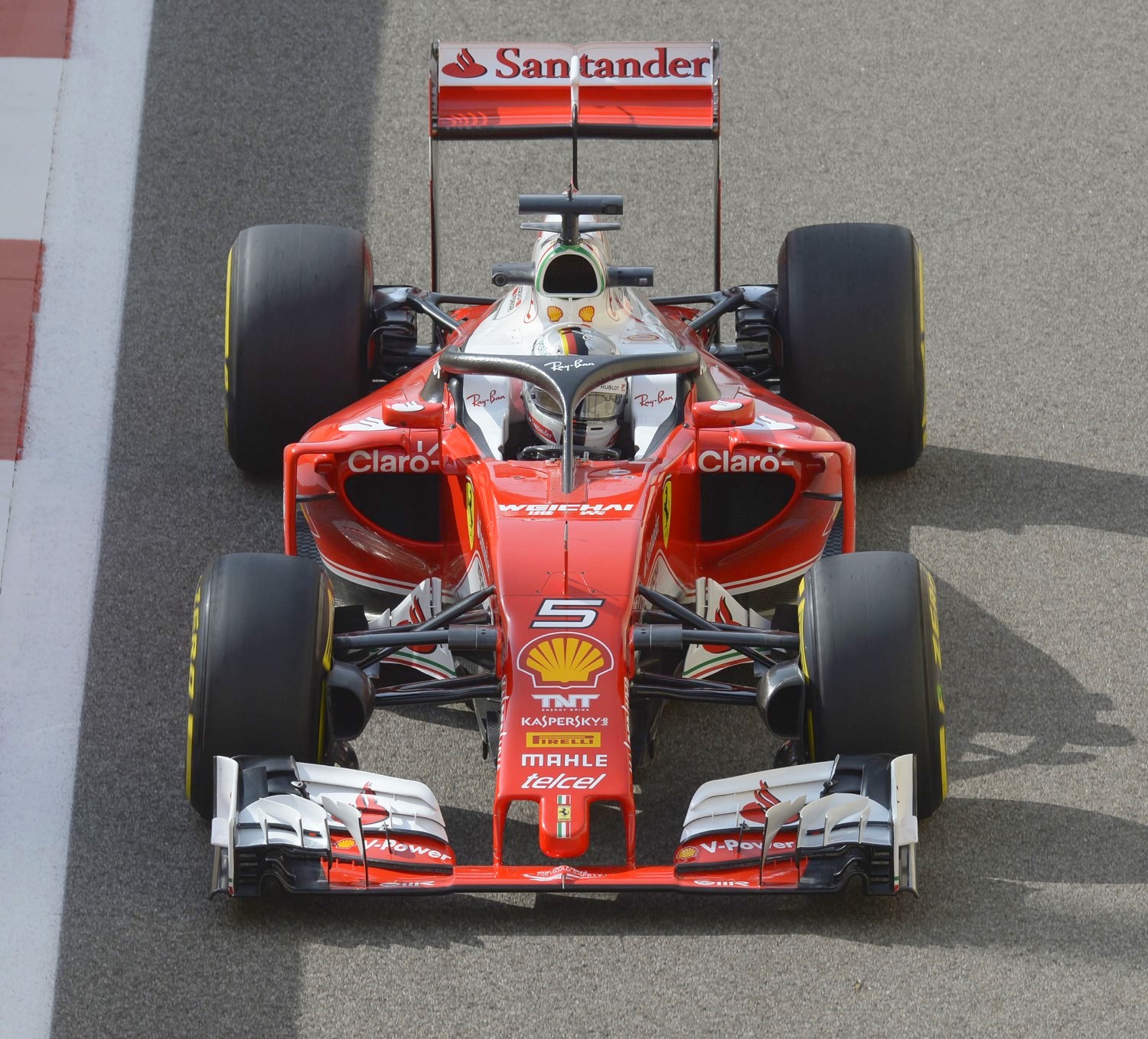 While the mandatory fitting of the cockpit protection system for next year was announced in July, it is believed teams are still waiting on crucial detail about how Halo must be integrated into the chassis.

And other missing detail relates to crash testing, with Halo to be among the strongest parts of the entire car.

The missing details mean that, at a crucial stage of development of the 2018 cars, the teams are nervous.

"We have to get the Halo on the car for next year and that's a big challenge," Renault technical director Nick Chester said this week.

"That will be a big deal as it changes the chassis construction."

However, while president Jean Todt said he is open to considering different solutions in the future, the FIA is determined to press ahead with Halo for 2018.

"It was quite a late decision compared to the project but because of the safety it's important everybody tries to work very hard on it," said Ferrari technical boss Mattia Binotto.

"The implications are from the chassis structure point of view," he added. "So we need to make sure that we are fitting the Halo well on the chassis and the chassis resists the loads that are required by the regulations.

"Also from an aero point of view it will certainly affect the back of the car and that has to be taken into account when designing the new car," said Binotto.

(GMM) A spate of announcements regarding the McLaren-Honda-Toro Rosso-Renault saga is set to begin.

Reports over the weekend suggested the meat of the entire complex saga is now on the bones, with McLaren to team up with Renault after splitting with Honda.

"The Japanese company has now accepted it is leaving McLaren to supply Toro Rosso from 2018," said the Spanish daily Marca.

Many of the actual contracts will apparently be signed in the coming hours and days, ahead of the Singapore grand prix this weekend.

Honda's McLaren split and deal with Toro Rosso, for instance, "will be made public on Wednesday or Thursday", the same sports newspaper added.

Marca is following the story closely, as both of F1's Spanish drivers are centrally involved.

Satisfied with the Renault engine deal, Fernando Alonso looks set to stay at McLaren, but it is rumored the British team "has proposed a salary reduction" for the 36-year-old due to the lost millions in Honda backing.

And Carlos Sainz is also part of the whole saga, reportedly as a 'sweetener' as Toro Rosso moves from Renault to Honda power.

The 23-year-old is joining Nico Hulkenberg at the works Renault team, with at least a two-year contract that could actually get a head-start from Malaysia next month.

"As is his style and the environment he has created, (Red Bull's) Helmut Marko could decide that he does not want to keep Sainz" beyond Singapore, Marca reported.

Red Bull junior Pierre Gasly looks ready to step in, but the Frenchman may have put his foot in it by declaring to the Japanese press that he is looking forward to debuting at Sepang.

"I just said I was hoping to drive for (Toro Rosso) soon," he clarified on Twitter. "(I) never mentioned Malaysia. (They are) just twisting my words."

Mercedes team boss Toto Wolff has emphasized that he expects the Marina Bay Street Circuit, the venue for the Singapore Grand Prix, to favor rivals Ferrari and Red Bull.

Mercedes has this season set the pace at high-speed tracks, with an emphasis on aerodynamic efficiency, but struggled at low-speed, tight and twisty circuits.

Montreal, Silverstone and Monza yielded 1-2 finishes for the Silver Arrows, while Ferrari locked out the top two positions in Monte-Carlo and at the Hungaroring.

Ahead of this weekend's night-time event, Wolff commented: "So far this year, we have seen the pendulum swing according to circuit type.

"On the surface, Singapore is the kind of circuit that should favor both Ferrari and Red Bull.

"Both have shown strong performance on low-speed circuits demanding maximum downforce, and we have found life more difficult at those places in 2017.

"Sometimes, characteristics like this are simply in the DNA of a car.

"Nevertheless, we learned a lot from our struggles in Monaco, raised our level of performance significantly in Hungary and we have made good progress in understanding what we need to do in order to get the most from the chassis."

Mercedes failed to finish on the podium in Singapore in 2015, a weekend that Wolff described as "character building", before bouncing back to win the following season.

But although encouraged by Mercedes' gains at the track, Wolff is aware that it still poses a "big challenge".

"Identifying clearly our strengths and our weaknesses has been a strength of our team in recent seasons," he explained.

"As we have pushed to become better and stronger in every area, we have put the finger in the wound in order to understand the root causes of both our good performances and the bad ones.

"In 2015, Singapore provided us with one of the most painful experiences in recent seasons, so we rolled up the sleeves, learned from it and managed to bounce back with a great win last year.

"But notwithstanding that success, this is a circuit we have found difficult to master with its combination of short, sharp corners, relatively short straights and bumpy surface.

"And we head to Asia this time round with the expectation that we have a big challenge ahead of us."

Mercedes leads Ferrari by 62 points in the standings.

Gasly expects news in 'next couple of days'

Red Bull junior driver Pierre Gasly says he expects news on his Formula 1 hopes in "the next couple of days", amid reports that he will land a Toro Rosso seat, if Carlos Sainz Jr. moves on.

Gasly hoped to graduate to Formula 1 this season with Toro Rosso, but Sainz Jr. and Daniil Kvyat were retained, the Frenchman instead moving into Super Formula with the Honda-powered Mugen outfit.

Gasly's 2018 prospects also appeared doubtful, amid Toro Rosso's intention to keep hold of Sainz Jr. and Kvyat, but the situation has been altered by the anticipated engine reshuffle.

Toro Rosso has been in discussions with Honda over a 2018 engine supply, in place of McLaren, which is expected to take up a Renault customer deal.

Sainz Jr. is understood to be leverage and has been linked with a move to Renault, in place of Jolyon Palmer, perhaps as early as the Malaysian Grand Prix.

Gasly, therefore, would be primed to slot into the vacant Toro Rosso seat, and the reigning GP2 champion briefly commented on the situation after taking victory at Autopolis on Sunday.

"I know there are a few things going on at the moment," said Gasly.

"I think we'll see in the next couple of days what will happen.

"It's been my dream, I've been working hard to get there, and I'm still pushing every day to make it happen. For me, it would be unbelievable.

"Now we have a few days until the next race and Malaysia will arrive quite quickly. Let's see how it goes, but hopefully I can be there."

Announcements on the aforementioned deals are expected imminently.

Force India COO Otmar Szafnauer believes a $150 million cost cap in F1 would be more than enough to go racing and could be successfully policed by the FIA.

As Formula 1 works on defining its future beyond 2020, when the sport ushers in a new set of regulations, reducing costs for teams is at the forefront of its priorities.

The age-old budget cap approach, branded by former FIA president max Mosley in the 90s, is once again considered as a possible means of achieving financial reform.

"We have to be pragmatic," says Otmar Szafnauer.

"Say the cost cap comes in a couple of years and there are people spending $250 million and have 1,000 employees — which is not farfetched — and then suddenly you say next year 100 million less, you might have to get rid of 300-500 employees and that's a difficult thing to do.

"But I personally think that if we say $150 million, that's a lot of money to go racing and that's probably an order of magnitude more than other car racing series.

"We should be able to do a fantastic job for the fans by only spending $150 million, so I think that's a realistic figure — not to mention that half the teams don't spend that much already.

"Although there is a cost cap, half of us would be way under and would have to do nothing.

"It's just half of those teams that would have to come down to that figure, probably four out of ten spend over that."

Formula 1 has an uncanny ability to spend lavishly. Introducing a budget cap could entice manufacturer teams to transfer development costs to a distant subsidiary in order to continue their spending spree under the radar, and out of reach of the FIA, the sport's regulator.

Szafnauer suggests however that manufacturers could be kept in check by potential whistleblowers.

"That's always the question that comes up, that if we cost cap are people going to go around it?

"I think there should be methods and mechanisms to prevent that, for example governments and taxes — there's a huge incentive not to pay your tax because that means you keep more money, but the governments have mechanisms to test and check and prod.

"I'm sure there's a lot of people getting away with it that we don't know about, but every once in a while there is a huge fine.
"If that punishment is big enough when you get caught, then I think you can police it.

"And to me the biggest deterrent in our sport is when people leave one team for another with the knowledge of what's going on and then saying 'you know what these guys are doing? They are circumventing the 150 million cap by this'.

"So whistleblowing is probably the biggest deterrent."

Lewis Hamilton Takeover – Monza to Singapore – Part 6/7
Lewis Hamilton is in the factory to give you a snapshot of what he gets up to with his engineers, we check out the test car that just got back from Paul Ricard and find out how almost 100 team members get around the world every other weekend.