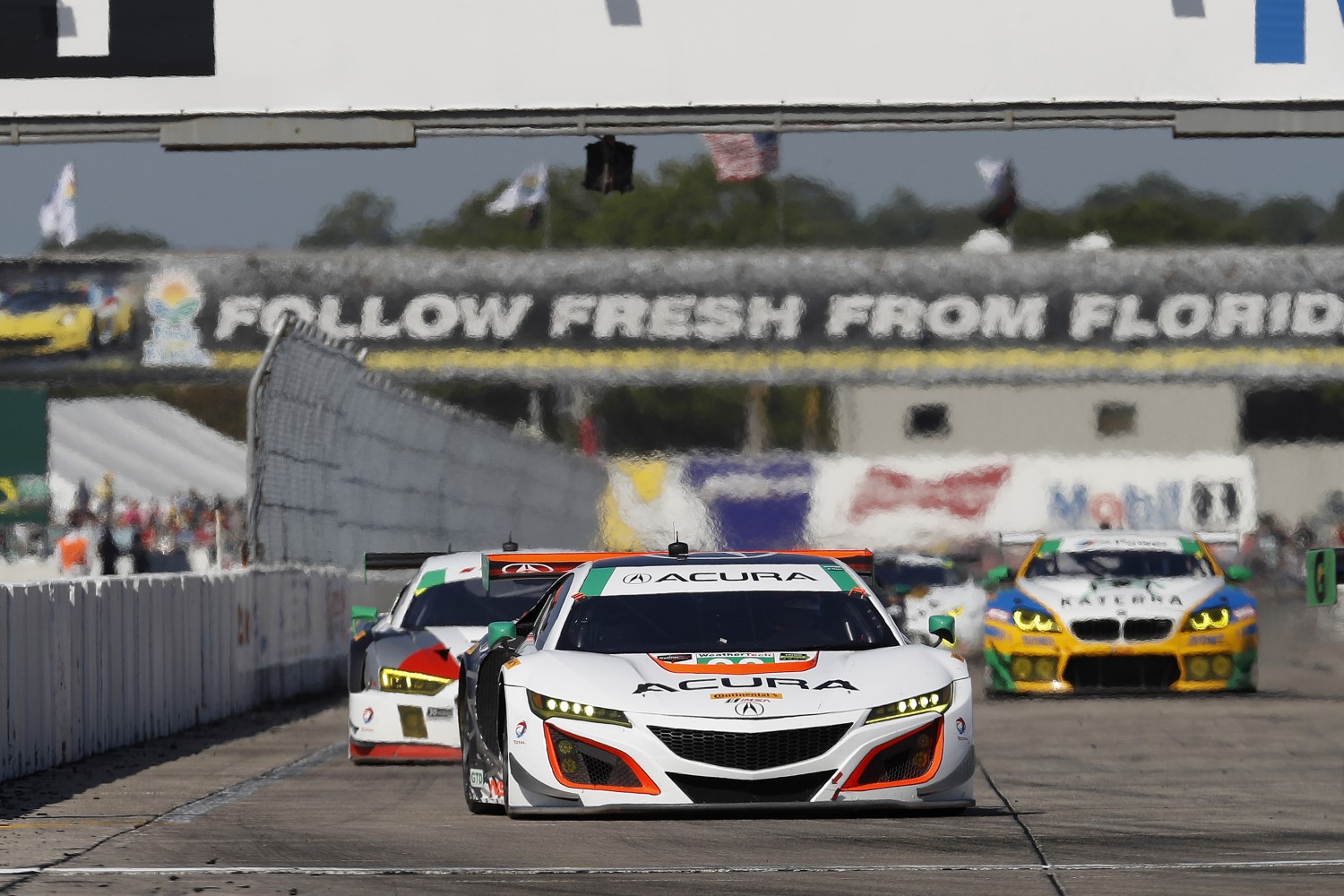 The latest road-going Acura NSX uses a combination of electric motors and a twin-turbo V-6 for propulsion. Art St. Cyr, president of Honda Performance Development (HPD), wanted that same technology to make its way to the track writes Marc Noordeloos of Automobile Magazine.

"We originally tried to do a hybrid (race car) with the NSX but there was no sanctioning body on the planet that was going to let us do that! We tried for 2 years–we lobbied everyone," said Cyr. "There was a concern (by the sanctioning bodies) about the increased costs and (other teams) adding things (hybrid technology) onto cars they already had. The NSX is a natural hybrid. Most cars are not."

So, HPD ended up developing the race car for the GT3 category, a highly competitive field on a global scale, but not a class that pushes new technology boundaries. After my NSX GT3 drive and chat with Cyr, I couldn’t stop thinking about how fantastic it would have been for Acura to showcase the NSX’s hybrid technology on the track. But then the 2017 24 Hours of Le Mans came and went. After the dramatic turn of events in the top-spec LMP1 category at the twice-around-the-clock event in France, I’m torn.

A total of five high-tech hybrid factory prototypes started the long race at the Circuit de la Sarthe on June 13, 2017–three from Toyota and two from Porsche. (Yes, there was a sixth LMP1 entry but the privately entered, Nissan-powered ENSO CLM P1/01 wasn’t even close to being on the same level as the works hybrid cars.) Kamui Kobayashi set a blistering 3:14.791 lap in qualifying to put the Toyota TS050 Hybrid on the pole. That’s an average lap speed of over 156 mph. Staggering. I was eager to watch the Japan-versus-Germany battle of technology and crazy pace, but my LMP1 viewing enjoyment didn’t last long as the near-1,000 hp cars started dropping like flies.

Toward the end of the race on June 14, all five LMP1 factory cars had spent significant time in the pits, and a lower-level, slower LMP2 car was leading the race overall. If not for the sheer pace of the #2 LMP1 Porsche 919 Hybrid near the end of the race, battling back after being down and out, we would have seen a proper David-topples-Goliath moment in France. Part of me would have loved to have seen that.

During all of this hybrid prototype action (failure?), there was a magnificent battle happening in the decidedly non-hybrid GTE Pro category. Corvette Racing and Aston Martin Racing battled back and forth until the very end, when the #97 V8 Vantage GTE took the lead just before starting the last lap. The Prodrive-ran team held the top position to the end. Three GTE Pro cars finished on the same lap, with a further three cars only one lap down. Remember, that’s after nearly 3,000 miles of racing. Brilliant stuff.

The GTE class is similar to the GT3 category, only faster. The speed of the cars in both GTE and GT3 is adjusted via balance of performance (BoP), in an attempt to keep any one team from running away with a race. If they’re too quick at one event, they likely won’t be as fast the next time out because the stewards will adjust the BoP. It’s why the wonderful but aging Aston Martin still competes with the newest-of-new Ford GT. That’s not the case with LMP1. Cars are built to the rule book and then let loose on the track.

Looking at the endurance racing world in an idealistic bubble, I’m not a fan of BoP. I prefer the LMP1 route–write the rules and then the team that builds the fastest and most reliable car (and follows through with great race craft) wins races and the championship. Unfortunately, it’s not that simple. History has shown that the rulebook method pushes costs out of control, causing entries to dwindle. Don’t forget that there used to be more car companies than just Toyota and Porsche in LMP1. It’s just such a wicked-expensive category to compete in. Acura NSX GT3 chief engineer Lee Niffenegger told me, "If there wasn’t BoP then it would turn into an arms race–nobody could afford to go racing."

Which brings me to the future of Le Mans and European endurance racing. It’s clear to me that BoP is the right way to go with GT cars. The racing is fantastic and it helps stop the newest and greatest race car from automatically dominating the field. As far as sorting out the LMP1 category, that’s not so easy. IMSA in the USA has gone the route of running slightly modified LPM2 cars as their top-spec DPi (Daytona Prototype International) class in the WeatherTech SportsCar series. It’s an interesting approach. It’s far lower-tech than the crazy-expensive LMP1 category in Europe. It was likely the best route for the U.S. sanctioning body, but so far in 2017 it’s been pretty much dominated by one team. That may change in 2018 with HPD teaming up with Penske for an Acura DPi car, but I still find the GT categories within IMSA offer better racing with more diverse entries that correlate better with the cars found on dealership showrooms.

The key balance for the FIA as well as the ACO (Automobile Club de l’Ouest)–the organizer of Le Mans–is keeping the LMP1 category exotic and fast while making sure the cars are reliable. Most importantly, the ACO must keep manufacturers interested in building cars for their top-spec class as the OEM’s deep pockets are key to running and developing the expensive cars. Audi left after 2016, and Porsche announced this July it will be discontinuing its LMP1 program after 2017. Toyota still hasn’t won Le Mans, and I wonder how long they’re going to keep trying before the bean counters say enough is enough. As far as the next-generation LMP1 car, the inevitable electrified future of the automotive world seems to support the hybrid route as the natural route. Battery packs will surely be fitted to the next-generation LMP1s on some level or another. It only makes sense. Marc Noordeloos of Automobile Magazine