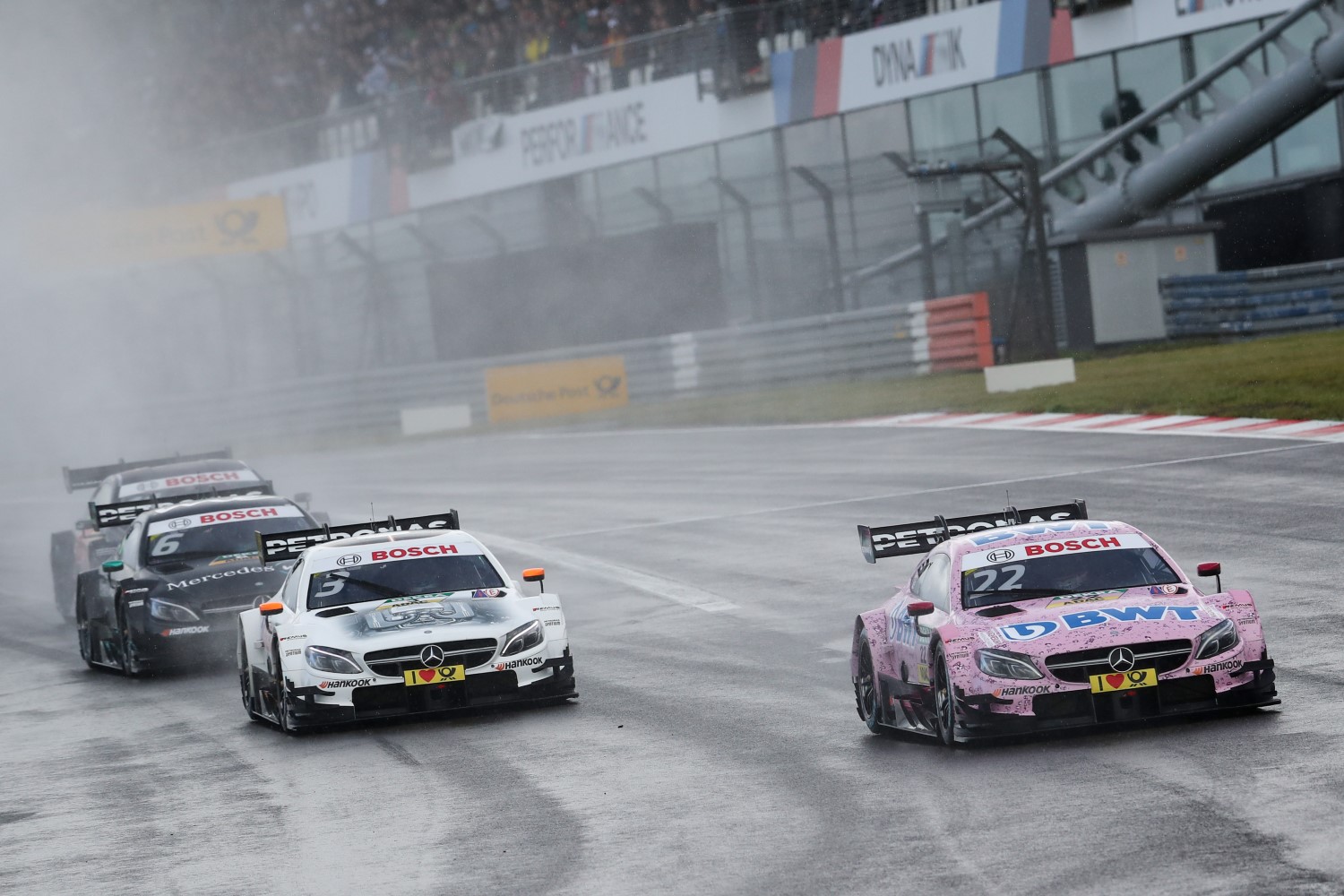 Lucas Auer is back in the game in the battle for the DTM title. In the 13th race of the DTM season, the Mercedes-AMG driver drove from pole position to victory in adverse conditions at the Nurburgring and thus moved up from sixth to second in the drivers’ standings. For Auer, it was the fourth race win of his DTM career and his third of the current season. Auer wasn’t the only one who brought the three-pointed star to the fore in the Eifel: in second to fourth place, Paul Di Resta, Robert Wickens and Maro Engel completed the success for the Mercedes-AMG DTM Team.

“It was a mega race for us," a delighted Auer said at the finish. “After my pit stop, I was a bit confused, but our strategy worked out in the difficult conditions." Behind the Mercedes quartet, Rene Rast finished as the best-placed Audi driver in fifth ahead of his fellow Audi driver Jamie Green. Augusto Farfus, who dominantly led the race in the opening stages, finished eighth behind Edoardo Mortara and thus was the best-placed BMW driver.

The 13th race of the DTM season was a real tire lottery: after a heavy downpour just before the start, the track dried out until the halfway point of the race. At that time, some drivers opted to change to slick tires while others stayed out with rain tires. The latter option turned out to be the right decision. Mattias Ekstrom and Augusto Farfus were particularly unlucky with their tire choice. Both drivers changed to slick tires at a time when rain set in again moments later. They both had to make a second pit stop and lost their contact to the front-runners. The Mercedes-AMG DTM drivers, who turned out to be successful, as well as Rast and Green only changed to a fresh set of rain tires at a very late stage. “Once the track had dried out, my rain tires degraded more and more, but we stayed out a little longer," race winner Auer explained. “Changing to new rain tires at a late stage paid off."

Swede Ekstrom was unlucky: he finished 15th in the race, but remains in the lead of the DTM drivers’ standings. “At the moment in which I came into the pits for a tire change, it started to rain again. Certainly, the limited communication with the team didn’t help, but that is the same for every driver. For us, it simply didn’t work out with the weather."

With the result of the DTM race at the Nurburgring on Saturday, the drivers at the front of the championship standings got even closer together. After 13 of this season’s 18 races, Ekstrom is leading with 128 points from Auer (127), Rast (124), Rockenfeller (110), Green (107), Glock (104), Martin (102) and defending champion Wittmann (97). With 140 points still at stake in the remaining five races and qualifying, the battle for the title remains highly exciting.

On Sunday, the second race of the weekend is scheduled at the Nurburgring. The race starts at 15.15 hrs. The first German TV channel ARD is broadcasting live from the Eifel from 15.00 hrs onwards. Previously, the starting grid positions for the 14th race of the season will be determined in qualifying, which will be broadcast live on ONE.