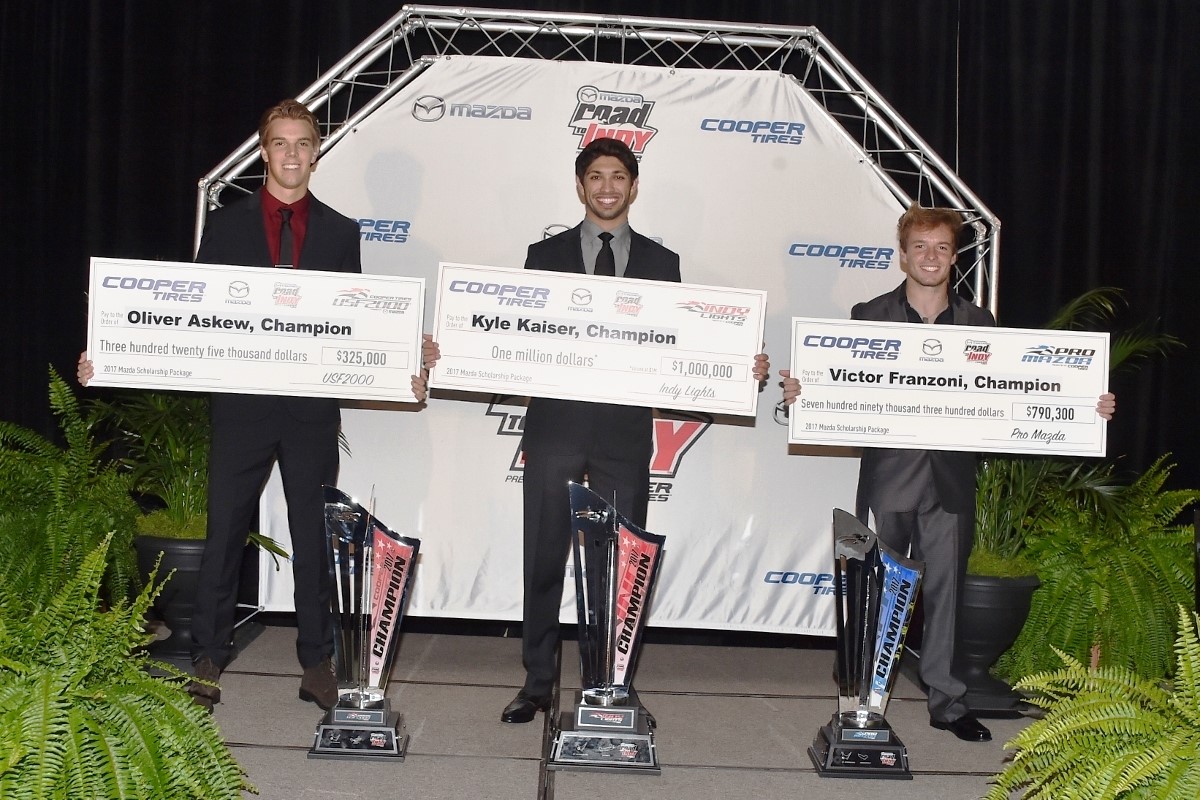 WATKINS GLEN, N.Y. – One day after the championship titles for all three levels of the Mazda Road to Indy Presented by Cooper Tires open-wheel driver development program were decided at the famed Watkins Glen International road course, 250 drivers, families, teams and sponsors gathered on Monday evening at the nearby Harbor Hotel for the traditional Championship Celebration banquet. A total of more than $2.6 million in Mazda Scholarships and other awards was distributed at the upscale venue on the shores of Seneca Lake.

The major winners included Kyle Kaiser, 21, from Santa Clara, Calif., who this weekend clinched the Indy Lights Presented by Cooper Tires crown, along with a Mazda Scholarship valued at $1 million to ensure entry into at least three Verizon IndyCar Series races in 2018, including the 102nd Indianapolis 500; Victor Franzoni, also 21, from Sao Paulo, Brazil, who secured the Pro Mazda Championship Presented by Cooper Tires and a scholarship worth $790,300 to graduate to Indy Lights; and Oliver Askew, 20, from Jupiter, Fla., who won the Cooper Tires USF2000 Championship Powered by Mazda, along with a $325,000 bonus to move on to Pro Mazda in 2018.

Weather conditions on Monday were in marked contrast to the race weekend, with cool temperatures and rain replaced by warm sunshine. The transformation allowed many guests to enjoy a wide variety of leisure pursuits in the picturesque Finger Lakes Region of upstate New York during the day as well as an outdoor cocktail reception in advance of the banquet and awards ceremony.

Although Juncos Racing’s Kaiser merely had to turn up at Watkins Glen to clinch the Indy Lights crown, highlights from the Soul Red Finale race weekend included a thrilling wet-weather victory by 2016 Pro Mazda Champion Aaron Telitz, plus nail-biting finishes to both the Pro Mazda and USF2000 title-chases.

A sweep of both Pro Mazda races by Franzoni ensured that Juncos Racing would become the first team to clinch two MRTI championships in the same year. It also prevented Australian Anthony Martin from becoming the first driver to claim USF2000 and Pro Mazda championships in successive years since Matthew Brabham in 2012 and 2013.

Meanwhile in USF2000, two youngsters in their first season of racing staged a tremendous duel for top honors. Dutch teenager Rinus VeeKay, who had already helped to ensure a maiden Team Championship for Pabst Racing, sped to an accomplished victory on Saturday, although it wasn’t quite enough to overhaul Askew, who maintained his momentum by securing the title less than a year after winning the inaugural Mazda Road to Indy $200K USF2000 Scholarship Shootout.

In addition, several new members were inducted into the Mazda Road to Indy Hall of Fame: 1993 Indy Lights champion Bryan Herta, who, after retiring from a successful driving career, went on to claim a pair of Indianapolis 500 victories as a team owner; Anders “The Viking" Krohn, who finished second in the 2010 Pro Mazda championship and is now enjoying a new opportunity as an analyst/reporter for NBCSN’s television coverage of Indy Lights and the Verizon IndyCar Series; and Bobby Oergel, a successful USF2000 driver in his own right who, as the proprietor of PR1/Mathiesen Motorsports, has helped develop the careers of several top drivers, including Charlie Kimball, J.R. Hildebrand, Dane Cameron and Jonathan Bomarito, and now fields a Prototype entry in the IMSA WeatherTech SportsCar Championship.

Dan Andersen, Owner and CEO of Andersen Promotions: “It’s an exciting evening. I’m happy to see another class graduate – I feel sort of like a university dean, watching a group of kids graduate. Our Indy Lights champion will leave us for the Verizon IndyCar Series and while that’s nostalgic, it serves to prove that the Mazda Road to Indy Presented by Cooper Tires is working. There is so much talent here and it’s nice to see them push each other and make the series better. It was a great night."

John Doonan, Director of Mazda Motorsports at Mazda North American Operations: “The reason for our investment hasn’t changed, and that is to give young talent around the world the chance to grow their careers. There is nothing like this in the world and we are proud to offer this to the industry. The recognition is starting to gain momentum, with graduates of this program earning success in every form of motorsport, especially the Verizon IndyCar Series. It is truly an honor to see those kids graduate but there is another pipeline growing and we’ll keep filling that pipeline in the name of Mazda and the Road to Indy."

Chris Pantani, Director of Marketing; Event Management, Sponsorships and Motorsports for Cooper Tires: “When you look at the champions that we have tonight, the talent in the fields, it’s growing each year. Every driver is talking about what this series has done for them – what Mazda and Cooper and Andersen Promotions has done for them – it’s changed their lives. As Victor (Franzoni) said, we’re not just giving prize money, we’re giving hope. 2017 was a great year with amazing potential and amazing drivers, but tomorrow starts 2018. We saw the first glimpse of the new PM-18 Pro Mazda car and we’ll see it debut at next month’s Chris Griffis Memorial Test, so we’re starting next year now."

Kyle Kaiser, Indy Lights Presented by Cooper Tires champion: “I wasn’t nervous all year but for that speech I was nervous. First and foremost, I want to thank the people who make this series possible – Dan Andersen and all his staff, who have laid the groundwork for everything we’ve done on the Mazda Road to Indy. They created one ladder system that gives a clear path to the Verizon IndyCar Series. And to Mazda and Cooper Tires – without them, there is no scholarship that allows us to graduate from the series and move up the ladder. John Doonan and Chris Pantani’s belief in this program is building the future stars of IndyCar and for that I am forever grateful. I’ve had a lot of ups and a lot of downs but everything I’ve learned in the past five years has shaped me into the driver I am today. One of the best decisions I ever made was the one to partner with Spencer (Pigot) and Juncos Racing, to be a part of Spencer’s Pro Mazda and Indy Lights championships. They taught me to be patient and wait for my time. Coming back for this year was the right move, to compete against a field who was constantly pushing each other to the limit. We are the future of this sport and I look forward to competing against these guys for years to come."

Victor Franzoni, Pro Mazda Championship Presented by Cooper Tires champion: “It’s almost difficult to understand what’s happening now, to realize that I’ll be driving in Indy Lights next year. It is so far from my dreams and now it’s real! Tonight was so special. I got some really nice trophies and a really nice ring, so yesterday and today are the best days of my life. I hope to repeat this next year; what I gave this year I will give again next year because I need to win. I will get ready and be competitive and represent Mazda, Cooper Tires and Andersen Promotions. I am so thankful for what they’ve given me. Anthony (Martin) pushed me so hard this year – I have had some amazing battles over the years with drivers who are in Formula 1 now, but this year was the hardest ever. He is too much like me, very aggressive and smart and constant, so it was awesome to race against him. I had to be the best in everything so I think this year made us both great drivers."

Oliver Askew, Cooper Tires USF2000 Championship Powered by Mazda champion: “Andersen Promotions does such a great job; this was one of the best nights of my life. I’m so appreciative to everyone at Mazda and Cooper Tires for everything they’ve done to make this such a great series. It’s a super special moment, to get Rookie of the Year and the Championship – and the ring is pretty amazing as well! I’m going to be wearing it nonstop. It’s all sinking in now. It’s such a relief and so much weight off my shoulders. I can’t thank everyone enough for believing in me and supporting me. This past year has been a whirlwind and I’m so looking forward to the future. The Cape guys really took me under their wing and believed in me, so to win another championship for them is such a great feeling."