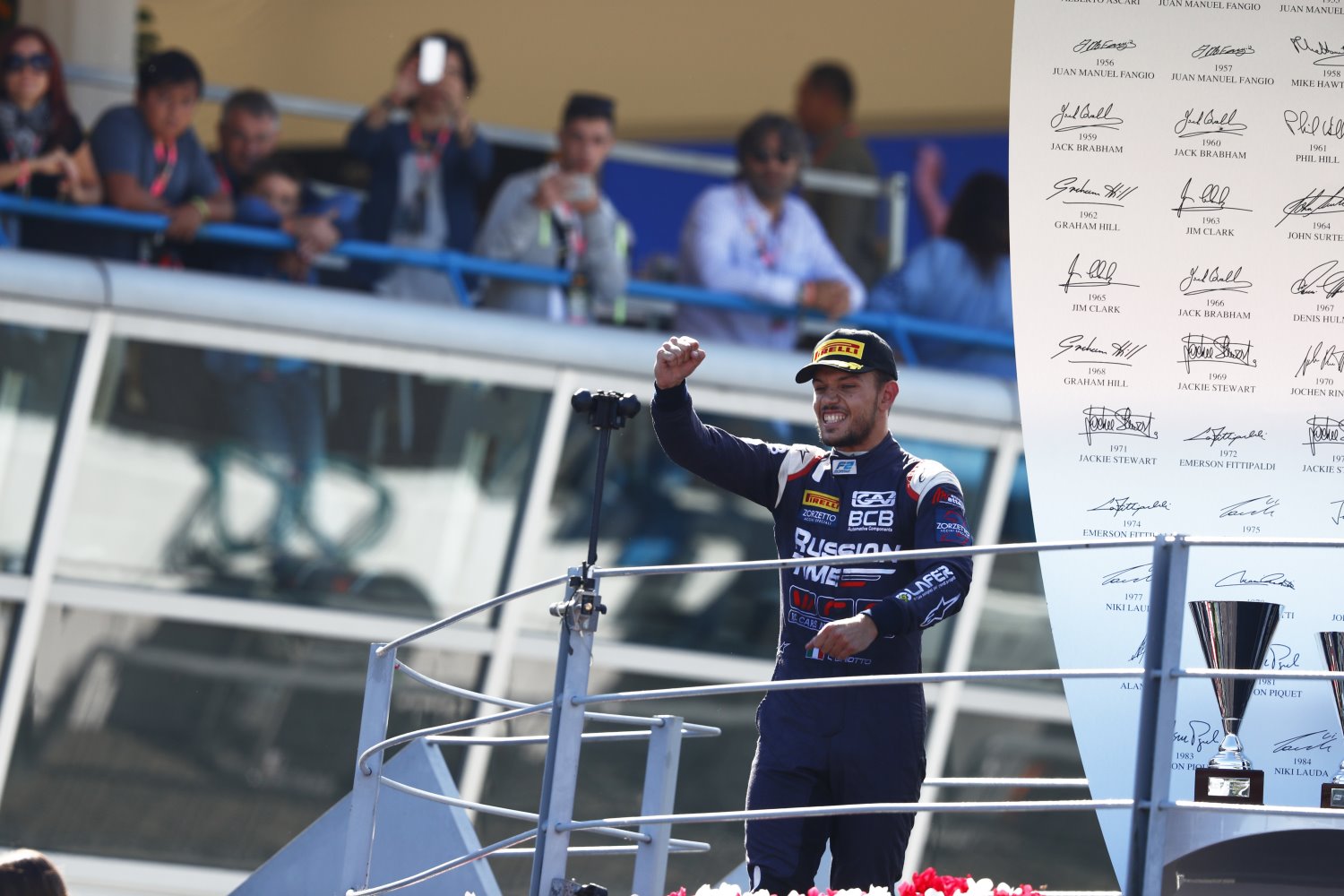 Luca Ghiotto has reset his emotional clock after a penalty handed down last night lost his feature race victory to countryman Antonio Fuoco by claiming a dominant victory in this morning’s FIA Formula 2 Championship sprint race, with a formidable drive on his home circuit to claim a popular win ahead of Sergio Sette Camara and Fuoco.

When the lights went out poleman Gustav Malja bogged down, leaving a clear run for a fast starting Sean Gelael to blast into the lead ahead of Louis Deletraz, Sette Camara, Malja and Ghiotto, who held station at the start but had big plans for the race: Deletraz cut both chicanes and had to give way to the Indonesian twice as they headed station ahead of the rest of the field.

The Swiss driver was looking for more though, and was back through Gelael for the lead at Rettifilo on lap 4, just before Ghiotto dispatched Malja on the inside of Parabolica for P4: the Swede ran deep at turn 1, losing out to Nicholas Latifi and Fuoco as just ahead of them Ghiotto mugged Gelael at the Lesmo complex for 3rd, leaving a line through the Indonesian for Latifi at Ascari.

Ghiotto was on a charge to reclaim the home win, and his job was made a little easier when Sette Camara cut Roggia next time through and had to cede position to the Italian, who now had just Deletraz between him and victory: the inevitable pass came on lap 11, when Ghiotto mugged the Swiss driver at Lesmo 1 for a lead which he would hold tight for the remainder of the race as he eased away from the squabbles behind him.

Sette Camara was determined to show that his Spa victory was the start of a purple period for him, easing by Deletraz on the front straight for P2 but unable to close down the leader, with the action moving further back in the order: Artem Markelov lost a front wing element as he pushed past Latifi at Lesmo 2 for P7 before undoing his good work by running deep next time through at turn 1, giving Latifi a run back past next time around to reclaim the position.

As the laps rolled down Ghiotto pushed on, claiming the checkered flag two seconds ahead of Sette Camara to the delight of the crowd, with another roar greeting Fuoco as he claimed his second podium of the weekend for P3, with a huge contingent of his fans camped on the finish line unable to contain their delight. Deletraz came home alone in P4, with a long gap back to Roberto Merhi who claimed more points for the weekend after dispatching Gelael late in the race, and Nobuharu Matsushita and Alexander Albon swapping places on the final lap after the pair took advantage late on of a clearly struggling Latifi.

After a dramatic weekend there was no change at the top of the drivers’ standings, with Charles Leclerc still leading Oliver Rowland by 218 points to 159, with Markelov pushing up by 2 to 152 points just ahead of teammate Ghiotto on 150, while in the teams’ title RUSSIAN TIME (302) have opened a small gap to PREMA Racing (295) and DAMS (291) ahead of the penultimate round of the 2017 championship in Jerez on 6-8 October.