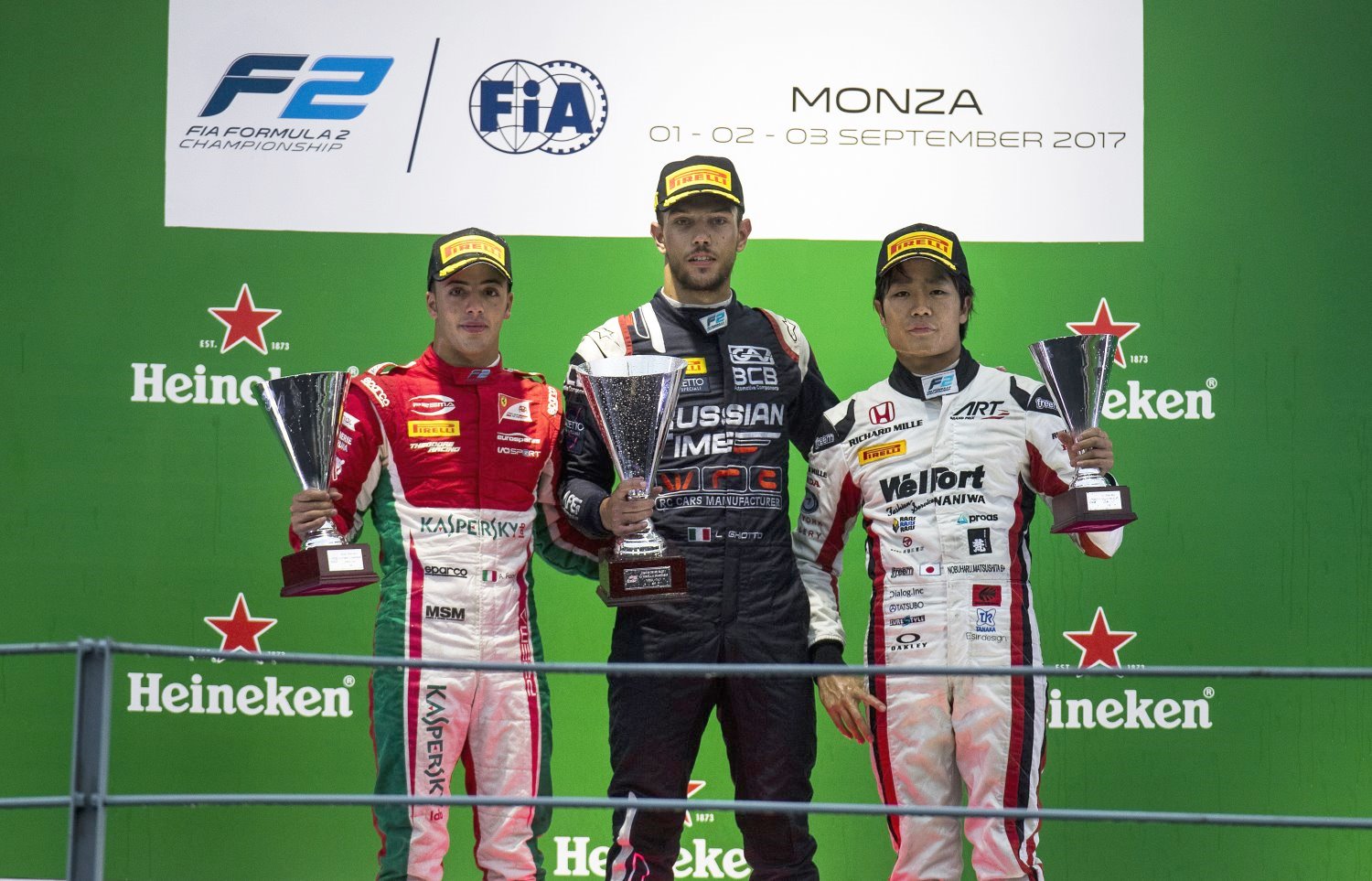 Luca Ghiotto has grabbed a spectacular last lap victory in a chaotic FIA Formula 2 Championship feature race this afternoon at the Autodromo Nazionale Monza, sneaking into the lead when Nyck De Vries and Charles Leclerc came together ahead of him for an emotional Italian 1-2 ahead of countryman Antonio Fuoco and Nobuharu Matsushita.

The start of the race was extensively delayed by a heavily rain-affected Formula 1 qualifying session, and with the rain continuing as the F2 teams made it to the grid the decision was made to run a series of formation laps behind the safety car until it was clear enough to make a standing start, reducing the race length in the process. After 6 laps the safety car eventually pitted, but another formation lap was required when Santino Ferrucci stalled, dropping the lap total to 23 for the race.

When the lights went out the field got gingerly underway, with poleman Matsushita slower than his immediate rivals off the line: De Vries cut across the track to cover him off, with the Japanese clattered by Artem Markelov at turn one while behind them Ghiotto was squeezed between Alexander Albon and Roberto Merhi. Leclerc attacked Matsushita at the end of the back straight, almost spinning before collecting his car and running inside at Parabolica to sit behind De Vries but ahead of Matsushita, Louis Deletraz, Merhi, Oliver Rowland, Ghiotto, Nicholas Latifi and Fuoco.

Deletraz was soon dropping back down the ranks as Merhi and Rowland started a fierce battle, while further forward Leclerc was setting a string of fastest laps as he looked to get on terms with the race leader: Rowland eventually dispatched the Spaniard and was looking for more, putting himself in a podium position by outdragging Matsushita at the Curva Grande on lap 7, with Ghiotto following the Briton through at Ascari a few corners later.

Leclerc was clearly faster than De Vries but struggled with the first chicane: the Monegasque driver ran deep a number of times to undo his good work, with De Vries making the most of it each time by pulling away. By lap 16 Fuoco joined the others in the top 6, just in time for the pitstops: Matsushita came in next time by, one lap ahead of Leclerc, which forced De Vries, Rowland, Ghiotto and Fuoco to stop next time through to cover, with Racing Engineering making a great stop to help De Vries maintain his lead as he emerged ahead of Leclerc.

Rowland came out in P3, but unfortunately for the Briton his stop was just too fast: his left rear came loose at the second chicane as he limped into retirement and brought out the safety car with 4 laps remaining, bringing everyone together for a late charge for the line. The race ran live on lap 22 with Leclerc getting a good jump on De Vries but running too deep at turn 1 and taking to the escape road, while Ghiotto snuck past the Dutchman before De Vries got a good tow and ran inside the Italian at Parabolica, reclaiming the lead for the final lap.

The trio ran tightly together all the way round the circuit before returning to Variante Rettifilo for the final time: Ghiotto was slow through the chicane, Leclerc attacked De Vries for the lead at the exit but the pair came together with Leclerc running wide, De Vries picking up a puncture, and Ghiotto inheriting the lead before pulling away from Fuoco for the win by 2 seconds, with Matsushita just behind in P3 ahead of Latifi, Albon (who made a strong recovery drive after an early spin), Sean Gelael, and Sergio Sette Camara, with Deletraz picking up the reverse pole ahead of Gustav Malja and Markelov, who also recovered well after a very early stop for a new front wing for the final point of the race.