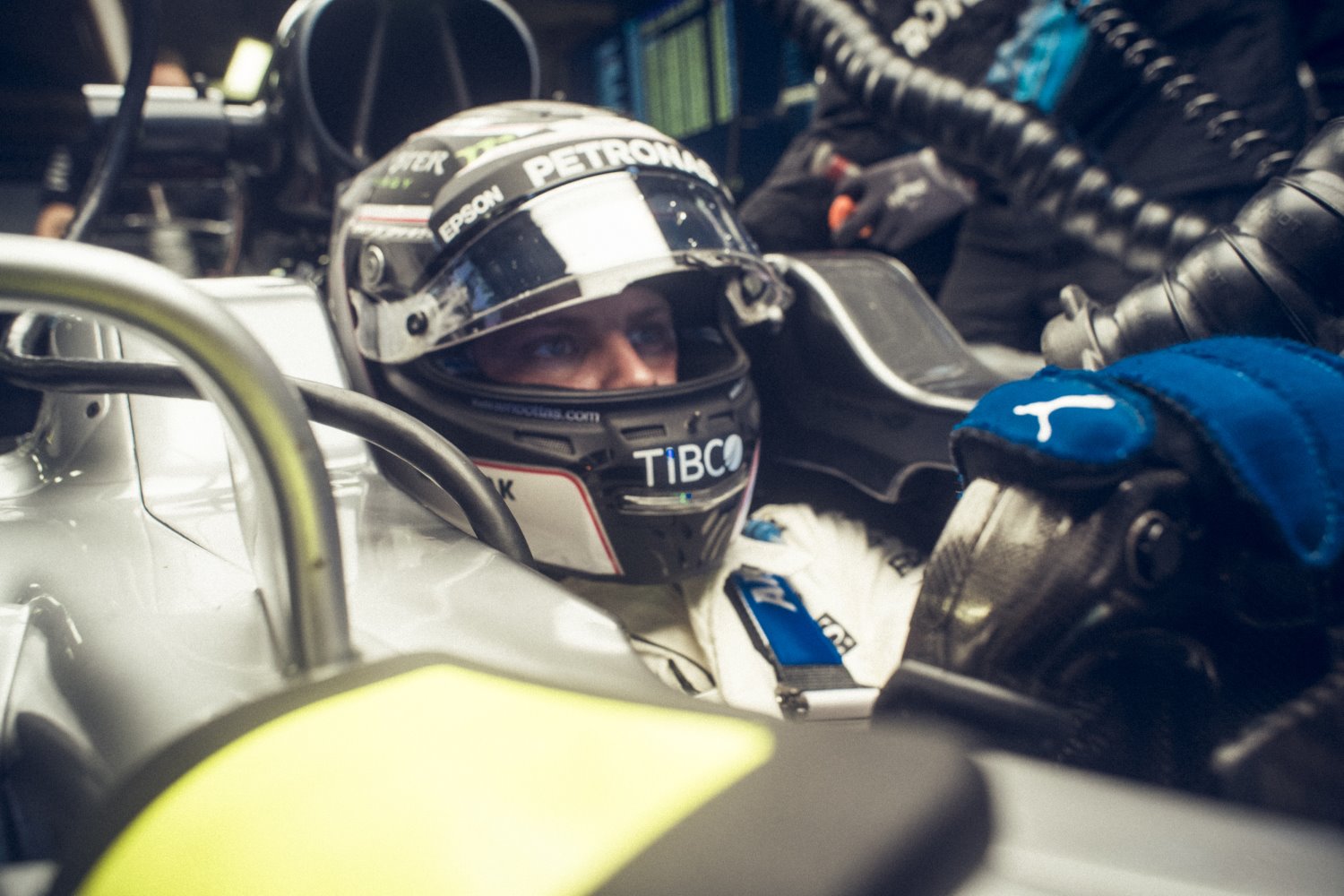 UPDATE Updated with quotes and photos.

It was closer than opening practice this morning, but the result was the same. Times for the 2nd practice for the Italian GP at Monza were grouped by team with Mercedes having the best car running 1-2. This time it was Valtteri Bottas leading Lewis Hamilton.

The Ferraris were closer this session but the Mercedes drivers were so confident they ended practice early and went to relax, confident they have the car to win on Sunday. Vettel again was faster than Raikkonen.

They were followed by the two Red Bulls and then the two McLarens, an encouraging result for the Honda team.

McLaren had an excellent afternoon, with Stoffel Vandoorne and Fernando Alonso seventh and eighth ahead of Force India’s Esteban Ocon and Williams’ Felipe Massa.

On race pace, as in Belgium, there doesn’t appear to be a lot between the two leading teams.

It was another relatively uneventful session, missed chicanes apart, but Lance Stroll spun his Williams at Ascari, where Kevin Magnussen’s Haas later rolled to a halt after a dramatic (and most likely curb-induced) suspension breakage in the second Lesmo, and Hamilton complained of a hot seat.

Carlos Sainz, who already has a 10-place penalty for his fifth MGU-H of the season, appeared to have an engine failure on his Toro Rosso two-thirds of the way through the session. The Spaniard’s team mate Daniil Kvyat was also told to stop his car in the closing minutes.

Valtteri Bottas
First of all it was nice that it stayed dry today because all the forecasts said that the rain could affect the running and we could have limited running before qualifying and the race in the dry. But we got our full plan done. In FP1 we were actually ahead of the plan because we were still worried about the weather. I think it was a good day – at least I have a better feeling than I had after the Friday in Spa, everything started on the right foot. Initially in FP1 we went slightly in the wrong direction with the setup, but we managed to change it around for FP2 and the car felt a lot better. Overall, it was a positive day, the car is looking strong, but obviously it's the next two days that count.

Lewis Hamilton
It's been a good day, a clean day. We got the running done, we got through our programme with no problems. The car seems nicely balanced here. We just have some work to do to eke out a little bit more performance. It looks quite close between us and the Ferraris, so I anticipate it's going to be similar to the last race in that sense.

James Allison
It was a slightly unusual Friday because the forecasts were quite pessimistic about the rain – overly pessimistic as it turned out. It meant that we put quite a bit of what we would normally do in the afternoon into the morning session. Considering the slightly unusual nature of the day, we're quite pleased with the way it's worked out. Both drivers looked fairly competitive on both the long runs and the short runs. It's a very unusual circuit with unique downforce levels, but we looked to be in ok shape. There is a threat of rain for tomorrow, so all bets might be off for what we learned today, but it will be a dry race. So looking strong in the dry today is a good sign.

Max Verstappen
“We are more or less where we expected to be with the car today. It is hard for us on this track with the long straights which we have to combine with a very low downforce setting so we just try to make the best of it. We will start the race a bit further back with the penalties but hopefully I can enjoy overtaking a good number of cars on Sunday. It makes sense to take the penalties here as this track is already not that good for us, Singapore is better for our car so we don’t want to risk anything there."

Daniel Ricciardo
“We were pretty competitive in those conditions today. We’ll make some minor adjustments tonight but generally the car feels quite good here. If it’s wet tomorrow we’ll probably try everything and see if we have a chance for a pole position. If it’s dry we’ll have to assess further, because even if I’m pole position I’ll probably start at the back. Even though I’ve got the penalty I’m actually excited for tomorrow and the race on Sunday, knowing we’ll start at the back we have a chance to have a fun race. Of course it’s disappointing knowing that the chance of a Monza podium is unlikely, but the chance of a fun race is there. I expected this a few races ago so at least I was prepared, however I’m excited for the chance to pass a few people on Sunday."

Paddy Lowe, Chief Technical Officer: We managed to run our whole programme in FP1 and FP2 without any issues, running a number of different aerodynamic configurations, with both drivers pretty happy with the balance of the car. Quite quickly, Lance was familiar with this track. So the pace for both drivers looks to be in reasonable shape for qualifying and the race. It’s going to be an interesting qualifying as it always is at Monza. Lance flat spotted his supersoft tyre in FP2 so he couldn’t do his long run on that tyre, concentrating on the soft instead, but apart from that everything was normal. We’ve had some difficult Fridays in the last few races so it’s nice to get one where things have gone to plan.

Felipe Massa: It was a much better Friday than we’ve had in the last few races, so I’m really optimistic that the car can be more competitive here in Monza compared with how it was in the last races. We tried some different bodywork options and different wings plus we managed a lot of laps on the tyres so I really hope everything comes together to have a much better weekend.

Lance Stroll: Today we were much more competitive, and it looks much better this weekend than in the past events. I had a good day on my side, but spun on my good lap in FP2, which was a bit frustrating, and I didn’t get to put my lap time on the board with the supersofts. However, everything is feeling good and hopefully we will say the same tomorrow. I think we can be very close to Q3, if not in it, so we just have to make sure everything works out and we will see what happens.

Carlos Sainz
Not the birthday I wished for! I knew since yesterday that we were going to get a grid penalty for changing part of the Power Unit, so that wasn’t a surprise, but today’s PU issue is definitely not something we welcome! This didn’t allow us to complete our programme and we know that we’re up for a very difficult weekend here in Monza. We will of course keep our chin up and keep pushing – I have to say I’m feeling good in the car, it’s very light as we are running very low downforce to try and compensate our engine deficit… It’s tricky out there, but at least I’m enjoying it and hopefully we can extract the maximum out of the car tomorrow and on Sunday.

Daniil Kvyat
Not a good Friday. I didn’t feel comfortable in the car today and nothing really worked as well as it should have. We now need to review everything overnight, understand the reason for this and hopefully find a better solution for tomorrow.

Sergio Perez
Sergio: “It’s been a busy day and I feel quite happy heading into the weekend. We expected to lose some track time due to the rain, but it didn’t hit us so we were able to maximise our mileage. We collected some important information to help us set the car up for tomorrow. I wasn’t as happy with the car balance during the afternoon session, but we have enough data to look into the issue and understand how to fix it overnight."

Esteban Ocon
Esteban: “It was a solid day of practice. We were testing a lot of different things and I think we came away with some very good data at the end of the day. I am pretty happy with how things went and the work we completed – we will need to do the same tomorrow in the final practice session before qualifying. There was a lot of track evolution as the day progressed: the main straight, in particular, has been resurfaced and the practice starts felt a bit slippery. It started raining at one point, but it didn’t last long so it didn’t really influence our day."

Robert Findley
“It’s been a pretty standard day and the weather was kind to us in the end, despite the prediction of thunderstorms. Right from the start, both drivers were quite happy with the baseline balance of the car, which allowed us to move through our test programme. We did some work to evaluate the different rear wing levels, which is something we always do here in Monza, and also to understand the tyre compounds we will be racing. Esteban was happier about his car than Sergio this afternoon, so we will need to look into the reasons for this and see how we can improve ahead of qualifying. There is still some work to do because we have seen the margins between cars will be very small. We have a solid base to build on, but a few tenths more or less will mean a big swing in terms of grid position, and we need to be ready for a very competitive Saturday."