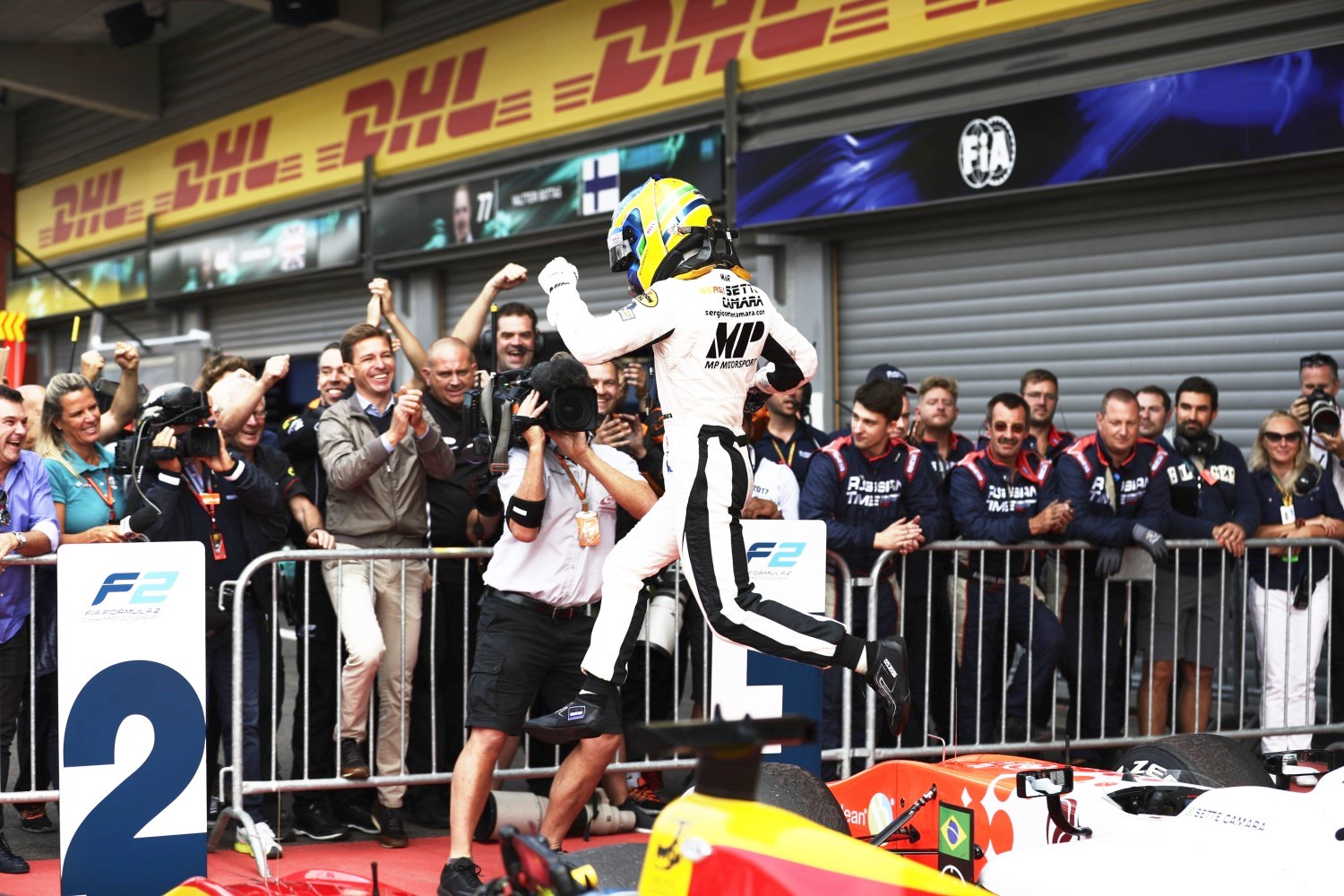 Sergio Sette Camara has claimed his first FIA Formula 2 Championship victory in fine style with a storming drive in this morning’s sprint race at the Circuit de Spa-Francorchamps, making an astonishing getaway when the lights went out and running off into the distance to win from Nyck De Vries and Luca Ghiotto.

The result was made at the start: when the lights went out the Brazilian made a barnstorming escape from P3, slicing between poleman Norman Nato and Roberto Merhi to have a clean run into La Source. De Vries’ start was almost the equal of it, but the Dutchman was slightly squeezed by Nato on the inside of turn 1, forcing him to hold position until he could pass the Frenchman at Les Combes, ahead of Merhi, Ghiotto and Gustav Malja.

Oliver Rowland and Charles Leclerc made their customary strong starts from the back of the grid, with the Briton leading his rival from P12 at the end of the first lap, with the positions swapping next time through after the Monegasque mugged Rowland at the Bus Stop: the pair changed positions all the way to Les Combes before Leclerc finally made it stick.

The Ferrari Academy driver was soon tearing through the field into the points, looking to make up for his disappointments of yesterday: he dispatched Santino Ferrucci and Robert Visoiu for 10th on lap 4, and Louis Deletraz and Gustav Malja two laps later, to put himself behind teammate Antonio Fuoco, with the Italian unable to delay Artem Markelov for long as the Russian looked to stay away from Leclerc to help with his championship fight.

The 3 were soon in a fierce battle for P6: Fuoco mugged the Russian at the Bus Stop before being outdragged by Markelov and Leclerc at Kemmel: the Russian looked to have the fight under control before a mechanical gremlin slowed him and forced his imminent retirement a few laps later. Ahead of them Ghiotto had taken the appearance of his teammate as a hurry up, and started leaning on his tires to dispatch Merhi as he hunted down another podium finish.

On lap 15 the Italian clinically dispatched Nato on the Kemmel straight and was closing on De Vries, who in turn was closing on Sette Camara, but a potentially explosive finish was defused by a big crash at the top of Eau Rouge for Nobuharu Matsushita, with the resultant safety car shutting down the race as the marshals looked to replace the barriers.

But with time (and laps) running out Sette Camara was delighted to claim his maiden win ahead of De Vries, who was greeted with a roar of approval from the thousands of countrymen surrounding the circuit, and Ghiotto, who had hoped for more but was nevertheless satisfied with another podium. Nato just held on from Leclerc, who mugged Merhi before the safety car, for P4, with Fuoco and Rowland filling the final points positions.