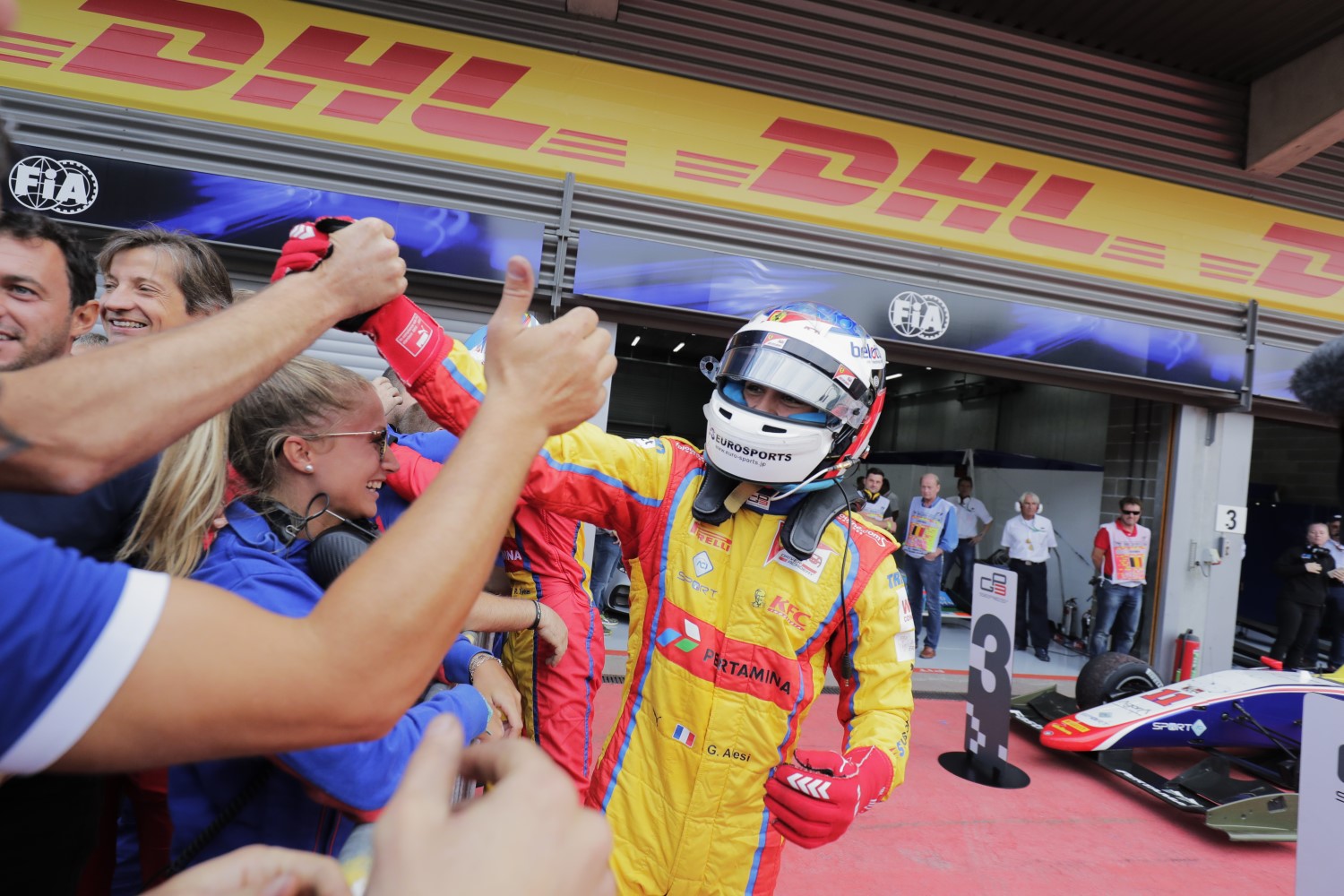 Giuliano Alesi’s great run of Sunday form continued this morning when he nabbed his third consecutive Race 2 victory after leading from lights to flag in this morning’s GP3 Series race at the Circuit de Spa-Francorchamps, looking unruffled as he lead home series leader George Russell and Trident teammate Ryan Tveter.

The victory was set up at the start when poleman Julien Falchero made a slow getaway, allowing fellow front row starter Alesi to storm across his bow and into the lead at La Source, with Falchero just holding back Tveter, Dorian Boccolacci, Jack Aitken and Arjun Maini. Niko Kari was soon on a charge, blasting past George Russell on the Kemmel Straight and then Kevin Jorg to grab P7 at the end of the first lap.

Next time by and Kari dispatched Maini at Kemmel, with Russell following suit on Jorg behind him: the pair were soon given a helping hand when Jack Aitken and Boccolacci came together on the Kemmel straight, with both men coming into the pits next time through to promote their rivals, and Aitken picking up a 10 second time penalty to make matters worse for the Briton.

But the 2 places weren’t enough for Russell: he was all over the back of Kari and soon dispatched the Finn for P4. Tveter wasn’t waiting around and finally found a way by Falchero for 2nd on lap 6, with Russell compounding the Frenchman’s problems by mugging him for P3 at Les Combes the next time through. Russell was still pushing hard, and almost inevitably outdragged Tveter on the Kemmel Straight on lap 9 to grab P2 before trying to break down the gap Alesi had built back to everyone else.

Nirei Fukuzumi had the same pace as his teammate, and brought it to bear as the laps rolled down: he blew past Maini at Kemmel for P7 before putting himself on Kari’s rear wing and attacking on lap 12 at Kemmel. The Finn pushed back hard, causing the Japanese driver to have a hairy moment on the grass before slicing inside and through before Les Combes.

But out in front Alesi was untouchable, imperiously leading Russell across the line by 3 seconds with Tveter a similar margin back to round out the Trident 1-3. Fukuzumi mugged Falchero on the last lap for P4, compounding the heartache for the Frenchman, while Kari just held off Maini and a tremendously fast Anthoine Hubert at the line but dropped out of the points due to a time penalty for the Fukuzumi incident, allowing Jorg to claim the final point for 8th.

Russell has extended his lead in the drivers’ championship to 36 points over teammate Aitken, 137 points to 101, with Fukuzumi closing in on 95 points ahead of Alesi on 87 and Hubert on 80, while in the teams’ title ART Grand Prix push further ahead on 399 points to Trident’s 202 and Jenzer Motorsport on 116 as the grid heads to Round 6 next week in Monza.