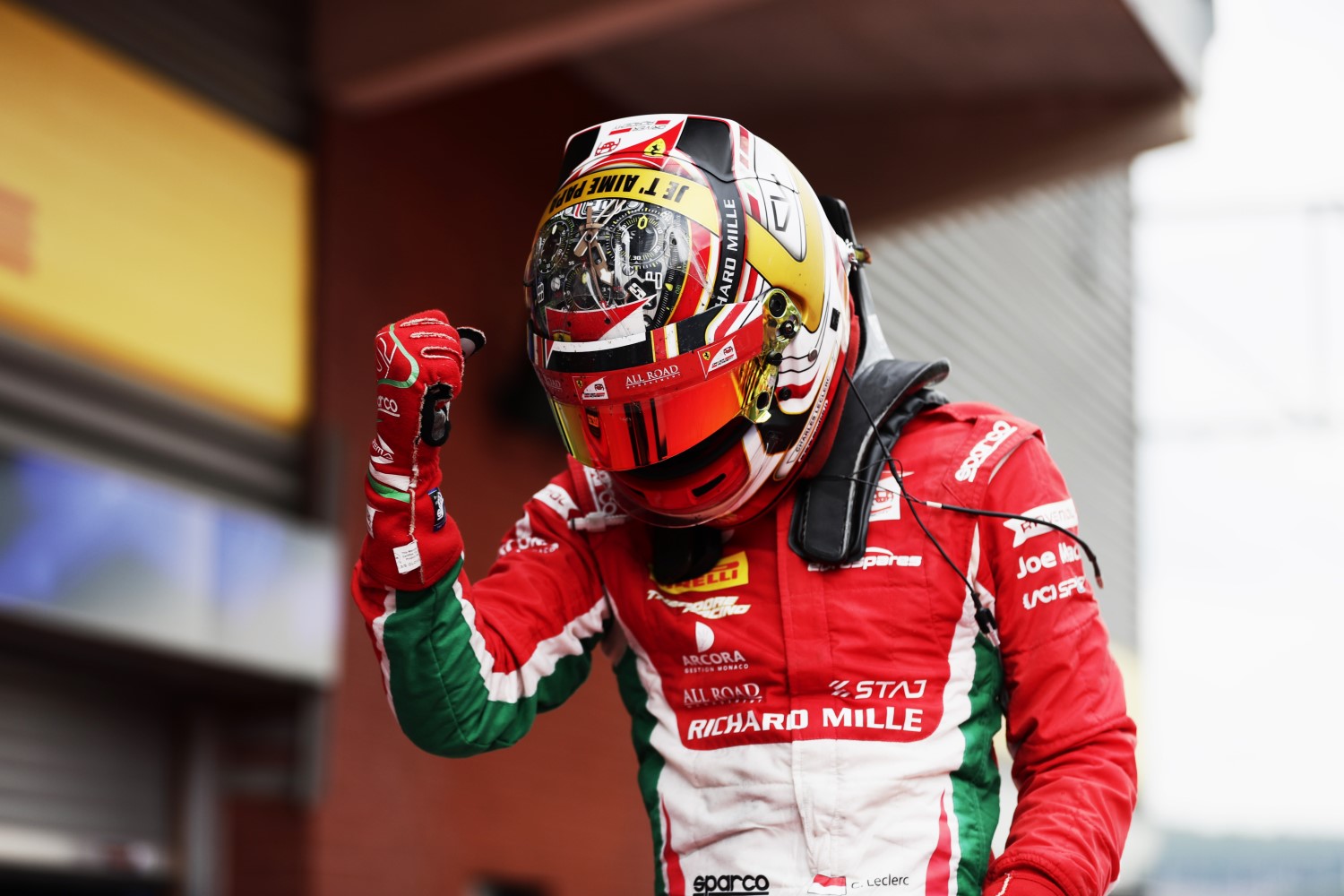 Charles Leclerc put in a crushing display of dominance for victory in this afternoon’s FIA Formula 2 Championship feature race at the Circuit de Spa-Francorchamps, storming off from pole when the lights went out and leaving his rivals floundering in his wake as he brought home his sixth win of the season by almost half a minute, ahead of Artem Markelov and Oliver Rowland.

The start was the best chance his rivals had of stopping the Monegasque driver, who sat alone on the front row when P2 man Nicholas Latifi failed to make the grid: a storming start by Oliver Rowland saw the title rivals run side by side through La Source before touching, with an element of the Briton’s front wing detaching as he watched Leclerc pull ahead and away when the pair headed towards Eau Rouge, ahead of Antonio Fuoco, Luca Ghiotto, Gustav Malja, Nyck De Vries, Markelov and Alexander Albon.

Further back Jordan King picked up a puncture after complaining of debris, with the tyre slowly disintegrating around the circuit, while Louis Deletraz and Sergio Sette Camara came together to the Swiss driver’s detriment: he was soon limping back to the pits as a VSC period opened to remove the debris and get the race underway once more, with Markelov soon lining up behind his teammate until Ghiotto slid past his countryman Fuoco to put himself on course for a podium.

Markelov was filling the Italian’s mirrors while further forward Rowland was the first driver to pit for fresh rubber, on lap 7: Malja followed him in next time around, with Ghiotto and De Vries repeating the process on lap 10, but all eyes were on the leader, who stopped next time by and re-emerged ahead of the one-sided fight between Norman Nato and Rowland in P3, with the Briton soon dispatching the Frenchman but unable to get close to Leclerc, who was simply faster than everyone else on track.

Markelov was now in the lead, on the alternate strategy ahead of Fuoco, and the Russian was clearly looking to bring home a strong result following his Budapest disappointments: he could pull away from Fuoco but the Italian’s teammate was relentlessly closing the gap, shrinking it to just 7 seconds when Markelov finally pitted on lap 16, coming out in P5 and hoping his better tires would propel him forward again.

And so it proved: while Leclerc pulled away from Rowland out front Markelov started to dispatch the drivers between them, mugging Malja on lap 18 and easing past teammate Ghiotto at the end of the Kemmel straight on lap 21, before hunting down Rowland as the laps counted down. Out front Leclerc took the plaudits for a sparkling win, while Markelov attacked Rowland at the Bus Stop, was pushed wide, and out-dragged Rowland to the line for P2.

Just behind the podium Ghiotto held off a huge attack from Fuoco for P4, while Malja won the first battle with new teammate De Vries by a second for 6th, with Sette Camara grabbing the reverse pole for tomorrow’s sprint race after finishing ahead of Roberto Merhi and Norman Nato, who claimed the final point after mugging Robert Visoiu on the penultimate lap for P10.