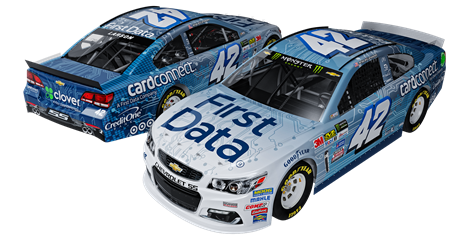 UPDATE Chip Ganassi Racing (CGR) announced today that First Data (NYSE: FDC), a global leader in commerce-enabling technology, will partner with Kyle Larson and the No. 42 Chevrolet SS team for two upcoming Monster Energy NASCAR Cup Series (MENCS) races at Talladega Superspeedway and Martinsville Speedway. This expands on a relationship that began last season when First Data joined Jamie McMurray and the No. 1 Chevrolet SS as a partner for the Fall Martinsville race. Additionally, First Data returns this year on McMurray’s car at Martinsville as an associate sponsor. First Data also recently announced a three-year agreement with Martinsville to be the entitlement sponsor for the track’s fall MENCS race, starting with the First Data 500 on October 29.

08/21/17 Chip Ganassi Racing this morning is expected to unveil a new sponsorship deal with credit card processor First Data, according to sources.

Ganassi has scheduled an 11:00am ET press conference at the NASCAR HOF to unveil the deal.

Terms were unclear as of presstime, but the company is expected to serve as sponsor for a handful of races this year on Kyle Larson’s No. 42 Chevy in the Monster Energy NASCAR Cup Series, with the team hoping to grow that in '18.

The deal has B2B connections as First Data does work with Credit One Bank, one of Larson’s primary sponsors. Adam Stern/SBD