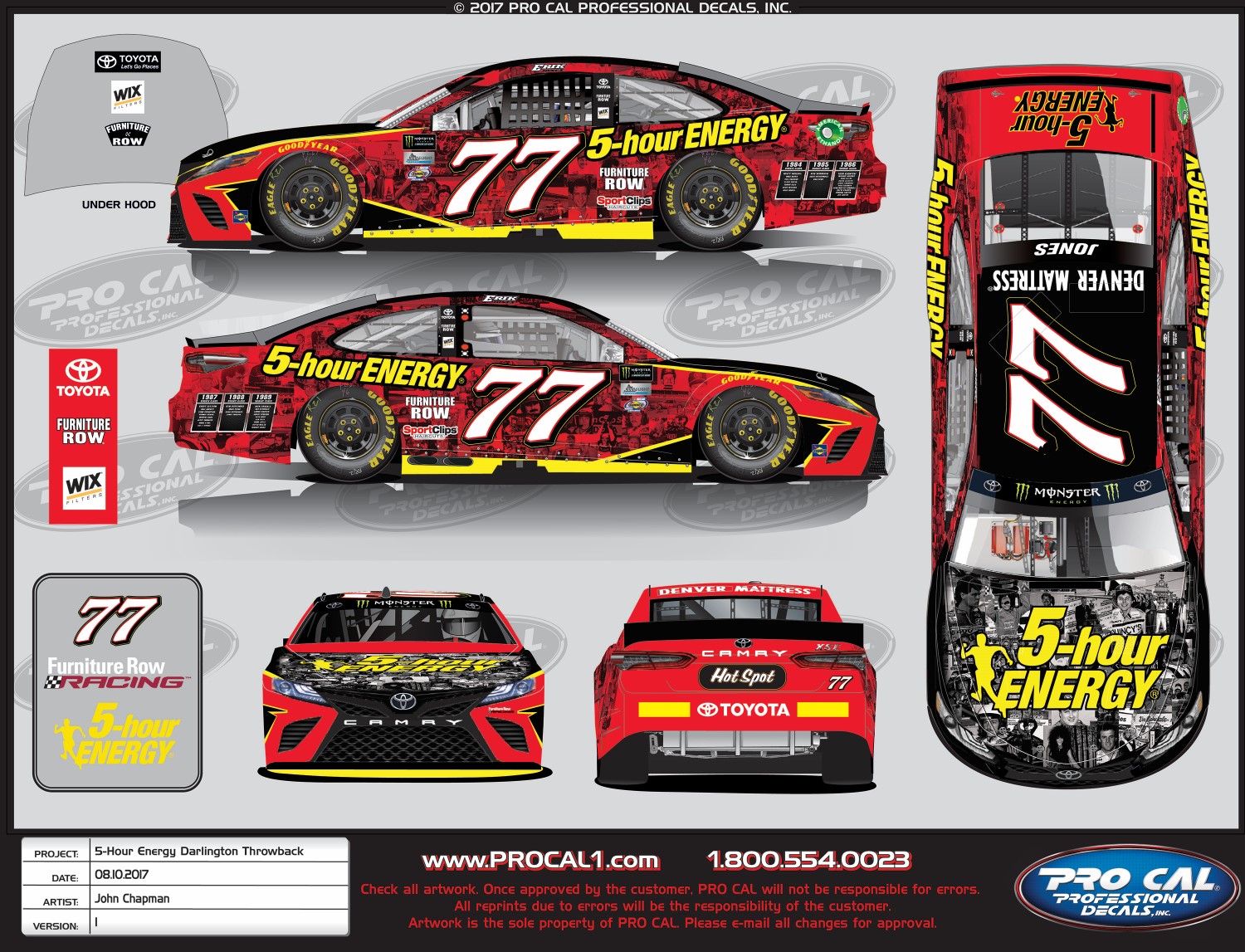 The unique paint scheme of the No. 77 5-hour ENERGY Toyota that 2017 NASCAR Rookie of the Year candidate Erik Jones will drive in the Sept. 3 Bojangles’ Southern 500 will honor the great rookie classes of the celebrated throwback era. The paint scheme is a photographic Who’s Who of the NASCAR Cup Series rookie drivers from 1984 to 1989, featuring Cup Series Champions, Daytona 500 winners and a couple of Hall of Famers.

Additionally, the scheme will include a photo of The 5-hour ENERGY Racing Throwback Sweepstakes winner, which gave fans the opportunity to submit their personal photos from the 1985-89 era. The winner, Rick Redpath of Greene, NY, was randomly selected among hundreds of entrants and will share the hood of the No. 77 at Darlington with some of racing’s royalty.

“I have been a race fan most of my life so this is a real treat for me," said Redpath. “It’s an honor and I’m stoked to be part of 5-hour ENERGY’s throwback paint scheme and the whole throwback weekend at Darlington Raceway. It has me just grinning from ear to ear."

The hood as well as the left- and right-side bodywork is covered with a photograph collage. The now legendary drivers honored include rookie-of-the-year winners Rusty Wallace (1984), Ken Schrader (1985), Alan Kulwicki (1986), Davey Allision (1987), Ken Bouchard (1988), and Dick Trickle (1989). Many of the images pair the driver’s rookie photos with snapshots from their crowning achievements.

“I’m proud to be driving the No. 77 5-hour ENERGY Toyota with a paint scheme that honors all of the rookie drivers from the mid-to-late 1980s," said Jones. “There are some great names with great histories and lot of experience in the design that I’m hoping will help me get around Darlington Raceway that much better."

The names of each rookie class is showcased on the rear quarter panels and many of those drivers are also honored with photographs in the paint scheme. A list of those drivers include Hall of Famer and Cup Champion Dale Jarrett, two-tie Daytona 500 winner Michael Waltrip, Ernie Irvan, Greg Sacks, Eddie Bierschwale and Hut Stricklin.

“The No. 77 5-hour ENERGY paint scheme created for the Southern 500 was designed to honor the rookie drivers from the throwback era as well as pay tribute to the great rookie season Erik Jones is having with Furniture Row Racing in the NASCAR Cup Series," said Melissa Skabich, communications director for Living Essentials, LLC, makers of 5-hour ENERGY. “Erik is part of a strong rookie class so we thought it would be great if he and the team could honor those great rookie drivers of the past."