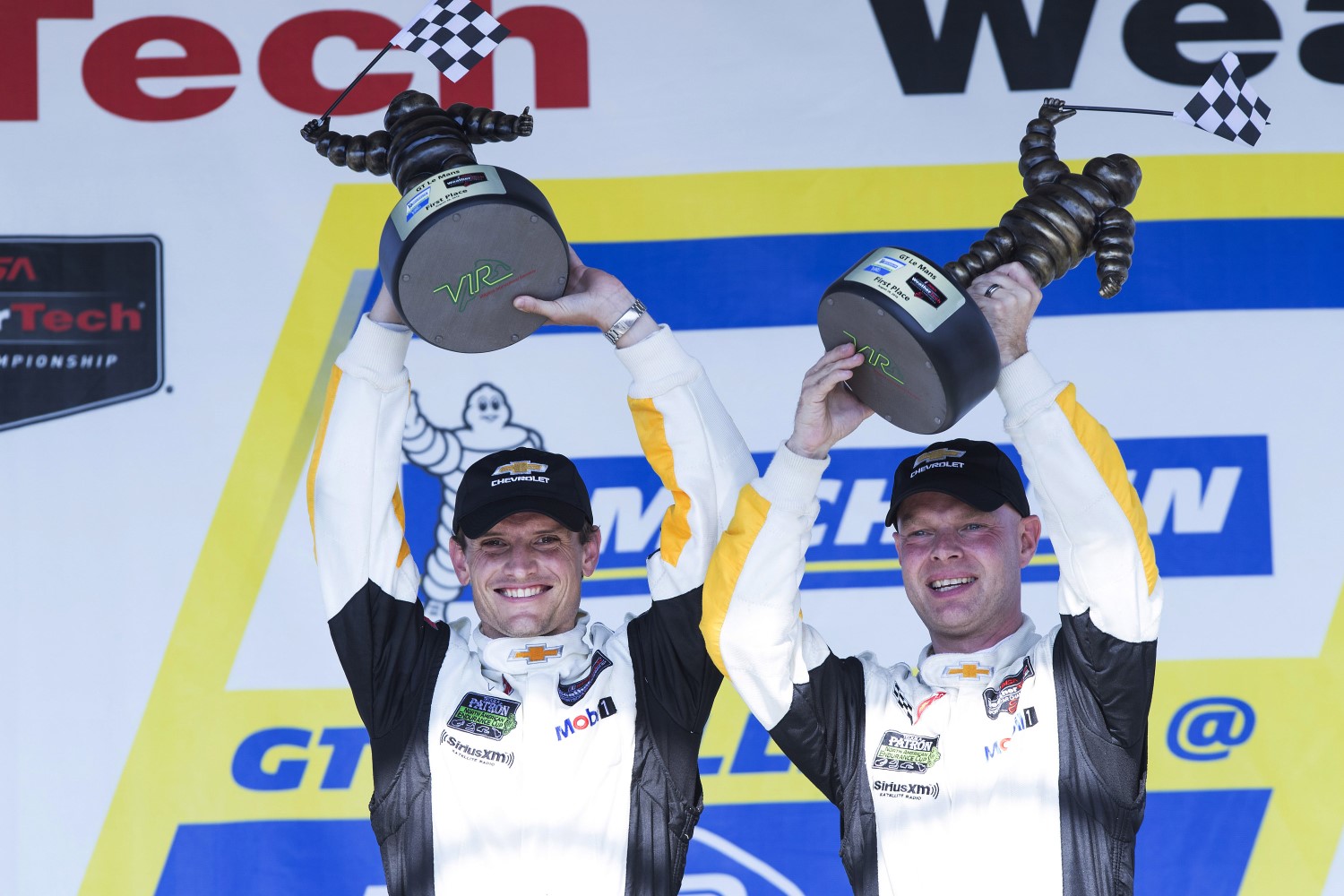 The co-drivers of the No. 3 Corvette Racing Chevrolet Corvette C7.R built an early lead in the GTLM standings with victories in the Mobil 1 Twelve Hours of Sebring Fueled by Fresh From Florida and the Advance Auto Parts Sportscar Showdown at Circuit of The Americas, along with a third-place run in the Sahlen’s Six Hours of The Glen and three other fourth-place results.

However, No. 66 Ford Chip Ganassi Racing Ford GT co-drivers Dirk Mueller and Joey Hand, who currently sit second in the championship standings – eight points in arrears of the No. 3 duo – have momentum, winning the most recent WeatherTech Championship round, the Continental Tire Road Race Showcase at Road America earlier this month.

That’s why this weekend’s two-hour, 40-minute race at the 3.27-mile VIR circuit, which will be televised live on FS1 at 1:30 p.m. ET Sunday in addition to live IMSA Radio coverage on IMSA.com and SiriusXM Radio, is so important. With three races to go in the season for the GTLM class, it’s “go time" in the race for the championship.

The best way for Magnussen and Garcia to swing the momentum pendulum back in their direction would be to have a strong performance at VIR. Fortunately for them, they head into the weekend as defending race winners in the Michelin GT Challenge.

“VIR has always been good for us in terms of pace and how the Corvette behaves," Garcia said. “The No. 4 [Corvette, co-driven by defending WeatherTech Championship GTLM champions Tommy Milner and Oliver Gavin] has won once, we’ve won another time in the No. 3 Corvette. Pretty much every year we have been competitive. It definitely would help in the championship to have another good race there."

While history may be on their side, however, neither one of the No. 3 Corvette drivers is overly confident. The GTLM class is too tough for anybody to think they have too great of an advantage at any time.

“A repeat of VIR would be fantastic, but it’s so close," Magnussen said. “We go into every race thinking we have a chance to win, but we also know that we can’t make any mistakes. All year, the whole field has been split by less than a second most times. So that means no mistakes and you have to be on it every time you are on track for every lap.

“I’m really looking forward to going back to VIR. It was a fantastic win last year and pole position. Hopefully, that means we can get back there and have another good weekend. Even if we don’t win it, hopefully we can keep our lead in the championship and extend it a little bit."

They’ll have plenty of competition, starting with their own teammates in the No. 4 Corvette. Gavin and Milner have had a tough season as defending champions, but they did win the BUBBA burger Sports Car Grand Prix at Long Beach and are a threat each weekend.

The Porsche GT Team also knows what it takes to win at VIR – having done so in 2015 – and brings a pair of strong 911 RSR race cars and a quartet of lightning-fast drivers. Patrick Pilet, the 2015 VIR winner, teams with Dirk Werner in the team’s No. 911 entry with Gianmaria “Gimmi" Bruni and Laurens Vanthoor in the No. 912.

Risi Competizione, which returns to WeatherTech Championship competition this weekend after a brief hiatus from the series, also knows what it takes to win at VIR, as the team’s 2014 victory will attest. Giancarlo Fisichella and Toni Vilander share the No. 62 Ferrari 488 GTE.

Hand and Mueller lead a two-car assault for Ford Chip Ganassi Racing in the No. 66 Ford GT and will be going for their third win this year. They won the season-opening Rolex 24 At Daytona in addition to the Road America race a few weeks ago. They’re joined by Ryan Briscoe and Richard Westbrook in the No. 67 Ford GT.

And BMW Team RLL also will be a force to be reckoned with this weekend. No. 25 BMW M6 GTLM co-drivers Bill Auberlen and Alexander Sims rode back-to-back victories at Watkins Glen and the Mobil 1 SportsCar Grand Prix at Canadian Tire Motorsport Park toward the top of the GTLM standings are currently third in the championship, just one behind Mueller and Hand. John Edwards and Martin Tomczyk – yet another pair of ultra-quick drivers in need of a little luck – complete the entry in the No. 24 BMW.

The Michelin GT Challenge takes the green flag at 1:35 p.m. ET on Sunday, Aug. 27. The weekend schedule also includes a pair of races for the IMSA-sanctioned Porsche GT3 Cup Challenge USA by Yokohama, as well as a doubleheader for Lamborghini Super Trofeo.

WeatherTech Championship qualifying and all of the weekend’s races will be streamed live on IMSA.com with IMSA Radio commentary. Ticket and other event information for the Michelin GT Challenge weekend is available now at VIRnow.com.