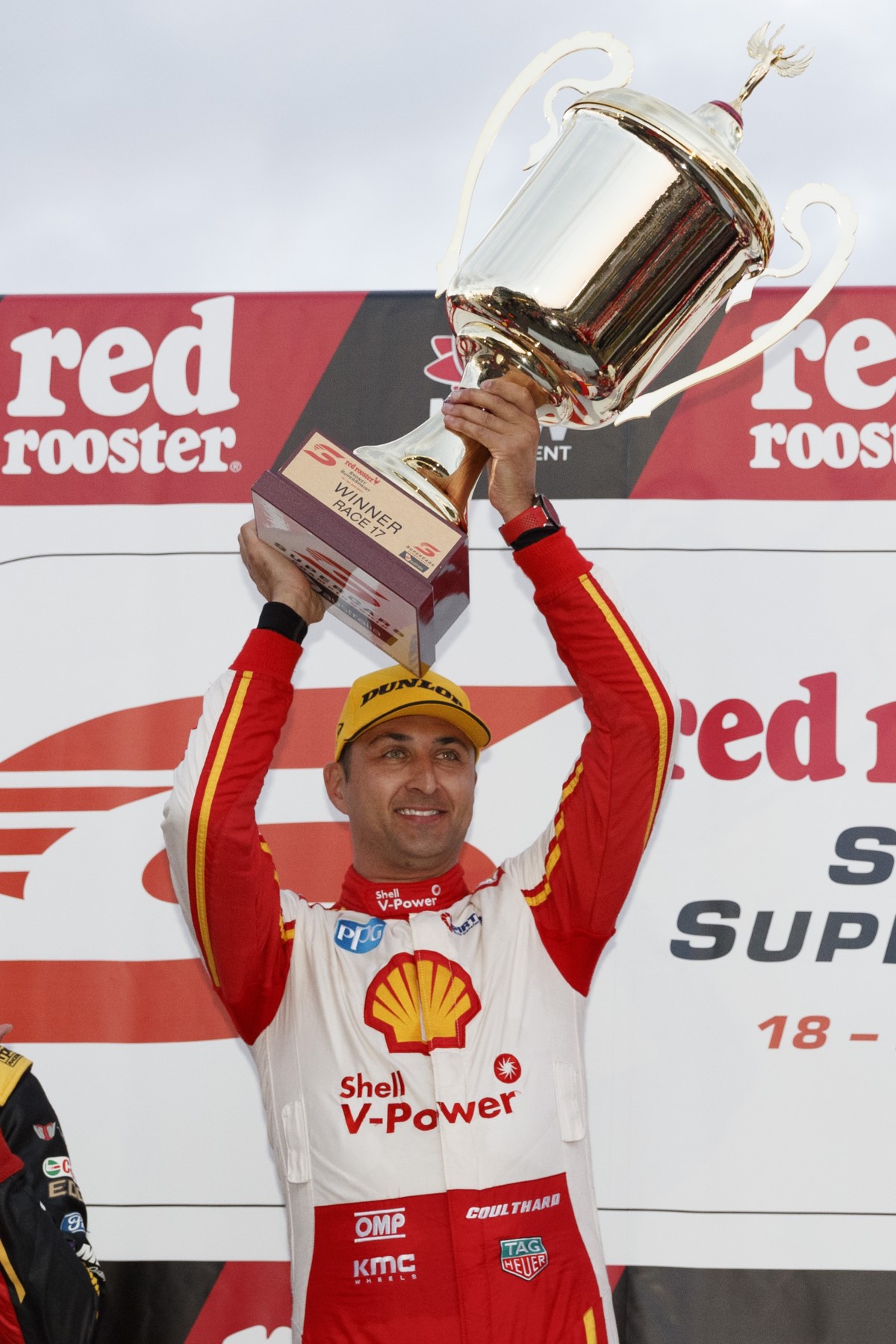 Fabian Coulthard was strong all day, netting a fourth place qualifying result. He got a solid start from the second row of the grid, and settled into fourth place.

When the pit stops began to unfold he ran consistent laps and good work from the crew saw him gain positions in pit lane. He was fifth at the late race Safety Car restart, before an incident at Turn 2 saw him jump into second place.

He then used his fresher tires to overtake McLaughlin for the lead and then drive away to a three second victory, his fourth of the season. It also saw him close the gap to both Whincup and teammate McLaughlin in the Championship.

Scott McLaughlin suffered his first blemish of his near-perfect Supercars season with an in-race penalty for taking out fellow Kiwi Shane van Gisbergen in the opening race of the Red Rooster Sydney SuperSprint.

McLaughlin copped a 15 second time penalty for spinning then leader Van Gisbergen following a heated biff and barge played out at more than 240km/h along the front straight. The two kept trading blows into the next few corners before McLaughlin shoved Van Gisbergen from behind.

Van Gisbergen’s spin pushed him back to last and almost took out Jamie Whincup in the process when he ran into the back of David Reynolds. Whincup recovered to finish with a smashed up front end which he nursed into third on the podium after McLaughlin’s penalty.

The melee played into the hands of not only Whincup but McLaughlin’s team-mate Fabian Coulthard who won the race but as importantly pegged back a bag of Championship points.

“It all unfolded in front of me so unlucky for Scotty. I am not too sure what happened but we will take it," Coulthard said.

“There’s lots of water to pass under the bridge so you can’t get disillusioned. I have got a good crew and a fast car so there is plenty to play for."

The biggest loser was Van Gisbergen who salvaged fifteenth but lost a swag of points.

“To his credit he came up straight away and apologized, we will move on," Van Gisbergen said. “The thing I couldn’t believe was he only got 15 points but there are people a lot bigger than me who make those decisions."

McLaughlin finished second on the track to Coulthard but tenth on the leader board when the penalty applied.

“What can I say, it was an absolute balls-up on my behalf. I said sorry to him and his team. Not the way I want to do it but good for the Shell V-Power Racing Team to get a win," McLaughlin said.

“It’s not my style. I got caught sleeping. I have got to look at a lot of stuff for myself tonight, it wasn’t the best race on my behalf. Sorry again to Shane, my fault, and we will move on tomorrow."

David Reynolds and Whincup had been following the top two at the restart but both took front-end damage that hurt them in the closing stages.

Chaz Mostert charged through from seventh to third, which became second once McLaughlin’s penalty was applied.

Earlier, McLaughlin claimed ARMOR ALL Pole Position number 12 to start the race from the first box on the grid. Remarkably the 24-year-old Kiwi has not started any race this year from behind the first two places on the start line.

Click here for full results from Race 17 on Supercars.com.

QUOTE: “There’s lots that can go right, and lots that can go wrong in our sport and today was a great example of that. I’ve had a great result, but it’s a shame for Scott to have some issues. The Shell V-Power Racing Team did a great job with strategy and pit stops for me today, and when the Safety Car came out I felt confident of a good result. Great to get another win, and we’ll aim to do the same again tomorrow."