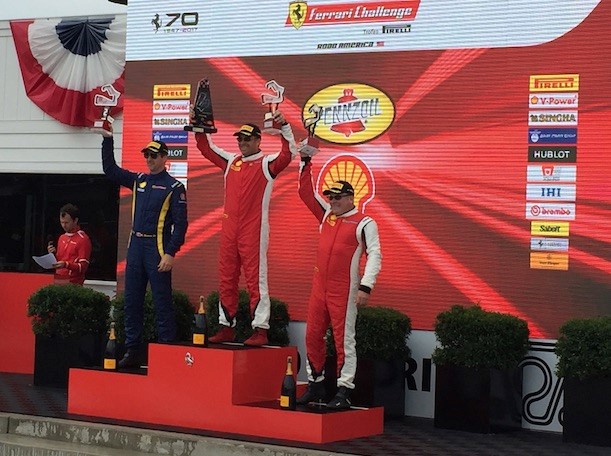 Plymouth Wisconsin – New Country Competizione brought three Wide World Ferrari's to Road America and ended up with two podiums at the fourth round of the Ferrari Challenge North America Championship. Peter Ludwig’s consistent top five finishes have kept him in the lead of the championship point standings.

Ludwig qualified his #11 Ferrari 488 Challenge in second place to start the first race of the weekend. After a good fight between the top three positions, Ludwig ultimately held his grid position and finished in second to claim yet another podium. Race two brought on a more challenging race for Ludwig as he started from fifth as he was unable to get a clear lap in the second qualifying session and end up in the same position. Despite missing out on the podium for race two, Ludwig still leads the Trofeo Pirelli Championship by 30 points in his Wide World Ferrari.

Todd Morici joined the team for his first time racing the Ferrari 488 Challenge in the #72 car. Driving in the Trofeo Pirelli AM category, Morici bettered his results with each outing. Qualifying eighth for the start of race one and finishing sixth was well received by the team, but going from seventh to third in race two really brought the energy to the podium celebrations.

The third driver of the weekend, Chris O’Donnell, was also new to New Country Competizione and competed in his first races of his career in the #299 Ferrari 458 Challenge. O’Donnell was faced with many challenges commonly seen in racing but over came them to clench his first career top ten finish.

The sixth round of the Ferrari Challenge North America Championship sends New Country Competizione down south to Austin, Texas where the drivers will take to the stars and stripes of Circuit of The Americas as they support the World Endurance Championship September 14-16.

"We came into the weekend with a 29 point lead, Race 1 was a strong points result for us finishing P2 with out closet rival finishing P3. In Race 2 qualifying we waited 10 mins to try and get better track position but then struggled to get a clean lap in due to an immediate red flag on the first flier and difficult traffic in the minutes remaining. We started P5 and finished P5 behind our closest championship competitor Martin Fluentes. Often times it's easy to get caught up in the desire to win each and every race but sometimes the risk is higher then the reward and right now I'm thinking big picture. Round 4 marks the beginning of the second half of the Championship, we left Road America with strong points and increased our margin to Martin.

COTA is next, a track I know with desire to win but we will stay smart and focus on our championship efforts."

“Wow, what a great weekend. I'm more than pleasantly surprised with quality and professionalism of the drivers, teams and hospitality. Ferrari North America have done an incredible job putting together a great team of individuals to manage the entire series.

Honestly, I was a bit stressed out over attending the first race not knowing what to expect. Having run the series in the past, they have really improved it tenfold everything from the hospitality to the quality of the drivers, teams, and the amount of seat time.

This is an incredible series and I highly recommend it to anyone with driving experience and a need for speed. A big thank you to my Team New Country Competizione, Eric Bachelart my Sponsors, Estrella Insurance Drive with the STARS, JPW LLC, The Responsive AUTO INSURANCE COMPANY and Morici Motorsports LLC!"

"Road America was my first Ferrari Challenge race weekend and the entire experience was spectacular! Our team, New Country Competizione, does a world-class job supporting team drivers on and off the track ranging from technical car support to professional coaching to hospitality. They are the complete solution for racing Ferraris in a highly competitive yet fun environment. Can't wait for our next race at Circuit of the Americas in Austin, TX."

"We had another very positive weekend in Road America. Peter managed to keep a good lead in the Pirelli Trofeo and we welcomed Todd Morici and Chris O'Donnell for their first experience in the Ferrari Challenge program this season. Even though Todd raced in the challenge Series many years ago, he adapted very quickly with the new 488 and he got his first podium for his first event. Chris participated in his first race ever and he proved to be very competitive and a real racer! We have great chemistry all together and we can't wait for the next event at COTA next month. I am also very proud of our team and the excellent job they did all weekend long."