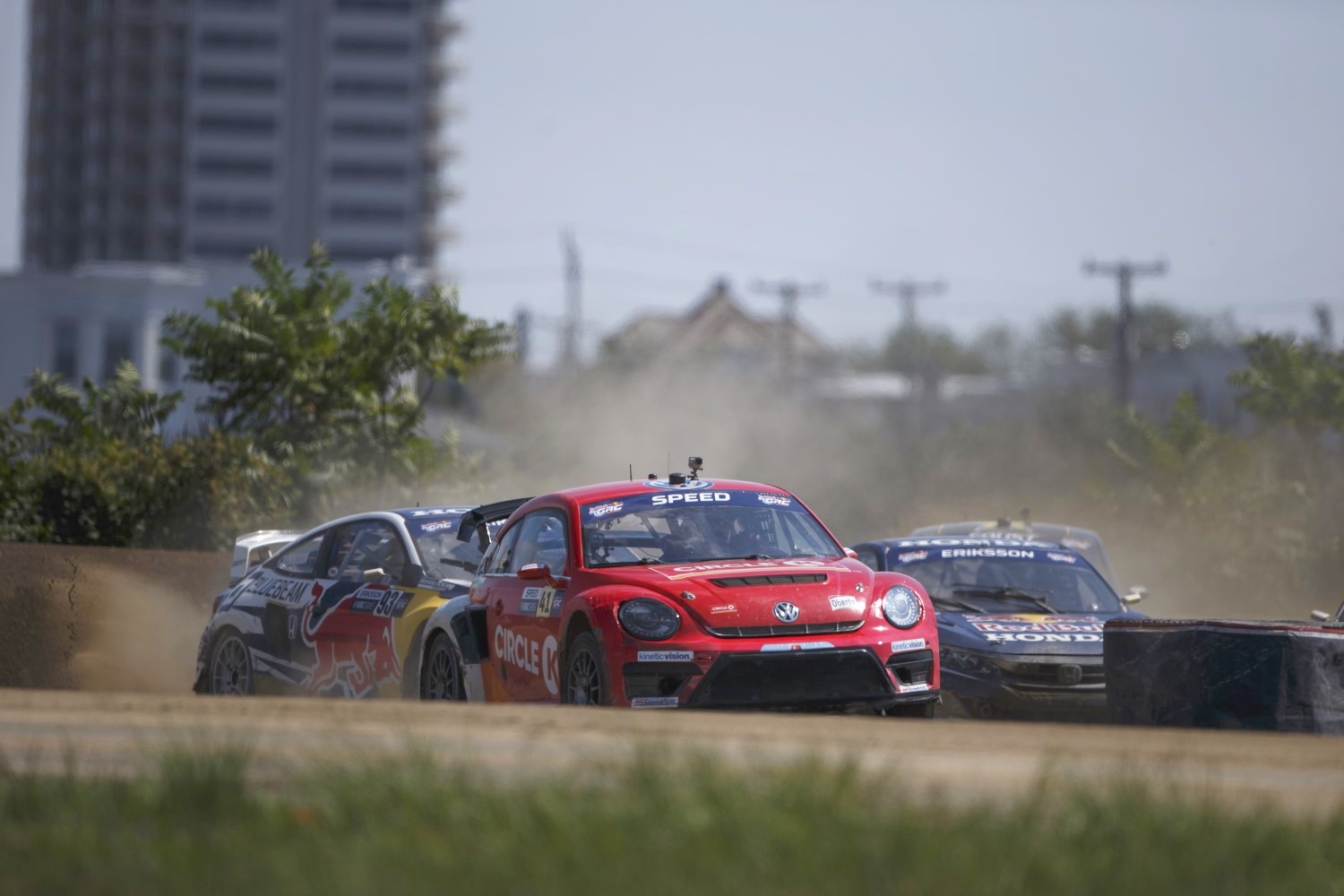 From the VW Motorsports Site:

With one of motorsport’s most famous names, Michael Andretti was born to play an important role in North American racing. As a driver, he did just that, becoming one of the most-decorated racers in American open-wheel motorsport, and he’s continued to make a mark even after hanging up his helmet. His successful Andretti Autosport operation has competed since 2009 across a diverse array of racing disciplines, with dozens of victories and several series championships.

We caught up with Michael Andretti after the first Red Bull Global Rallycross race in Indianapolis—a few short miles from the Andretti Autosport shop, just after Scott Speed and Tanner Foust had scored a dominating hometown 1-2 finish for the team the day before.

Rallycross is very different from the other forms of racing you do at Andretti Autosport. What attracted you to GRC before you were an entrant in the series?

I went to an event and really enjoyed the concept of it all. We started a conversation with Volkswagen at that time and I knew that if I was ever going to get involved, it had to be with a manufacturer partner. We developed it together with Volkswagen and that’s how we got involved.

One of the other things that really got me interested for Andretti Autosport was that Rallycross is going after millennials in a way other racing series don’t. For us, it diversifies our racing product. It was the perfect way to do it.

What was something that surprised you about working in Global Rallycross?

What’s surprised me is, it’s a very labor-intensive series for the mechanics. They work their butts off. Of all the series that we’re in, the rallycross mechanics probably work hardest. They basically get a car that’s crashed after every practice and after every heat, and they have around 45 minutes to turn around and get it ready for the next time on track. It’s amazing the amount of work and the things that they do between all that.

It’s unusual for a team to achieve success right away in a new racing endeavor, yet Volkswagen Andretti Rallycross was successful from early on. Were you surprised by how quickly the team started contending for wins and championships?

I thought we had a really good shot. First of all, we were working with a great company like Volkswagen, so I knew that we had that going for us. I think that where it all started—where I really felt like we were going to do well was our driver lineup. I mean, the first two guys who came to my mind were the guys we ended up with—Scott and Tanner. I thought of Scott because he had only run two races in GRC and I think he won them both, never even having seen the car before. I was very impressed with that. Also, the way Tanner drove compared to the other guys that were in the series stood out to me. When I went to watch them, I thought, “He’s got the right idea." So I thought we were going to be competitive, just having these drivers and then obviously collaborating with Volkswagen.

The first year was a tough one because we were competing with these old cars [Polos] that made for a tough situation, but our drivers carried us through. The first season went down to the wire where we were in contention for the championship with Scott, but once we got the Beetle it’s been a lot of fun.

You’ve worked with other manufacturers on racing programs before, but the relationship with Volkswagen is particularly close. There are even Volkswagen Motorsport engineers from Germany who come to work at each race.

Every week, we have a meeting by phone with Volkswagen Motorsport, so there’s constant communication. We’re 100 percent their team and we are on the same page with them all the time. I think the Germans are tough. You have to earn their respect, and I believe it took us a year or so to do that, but once you do, they really get behind you and I think that’s where we are today. I think that has a lot to do with our successes—the way we’ve been able to work together with Germany.

Your crew in Indianapolis works well with Volkswagen Motorsport in Germany, but it’s also important for the guys who get behind the wheel to fit into the equation.

That was the other thing. The drivers’ personalities are really good. They work and learn a lot from each other on the race track, but what I really love is their relationship off the racetrack and the way they play off each other. When they do their skits for VW’s online videos, I think they’re hilarious and I think it’s because their two personalities are fun and work well together. I love the whole dynamic of our team here with the drivers. When the drivers are getting along like that, it just makes the rest of the team easier. Like I said, it goes back to the drivers—I think they’re a big reason for our success.

This season has been particularly good for Volkswagen Andretti Rallycross. The team scored its fourth 1-2 finish of the year in Indy. How important was it for you to do so well at your home race?

It was great; I was so happy for the guys. This was a chance for them to have their families come out and enjoy it. The wives and kids can see what dad does and then to go out and finish 1-2 is so awesome for the team. I’m so happy for all the guys. It was a big weekend for us.

After this weekend, your drivers are back leading the points. VW has a pretty big lead in the Manufacturer’s Championship. Another set of championships is the goal, right?

We’re going after it. It’s tough though—it’s not a given. The way the points system is this year, it’s making it tough. We have to execute each and every heat and each and every final to maximize the points we get. I think there will be guys chasing us who are going to be there at the last race that we have to worry about. We cannot lose our focus. We’re in a good position, but it’s not over. We can get beat pretty quick. We have one bad weekend and those other guys are back in the lead, so we can’t lose sight of that.

The Beetle GRC is unlike anything you ever raced. Any interest in getting behind the wheel for a test drive?

They look like a blast to drive. It’d be fun to get into, but also I’m so out of it that it would be frustrating for me. No doubt they’re cool. They’re one of the coolest cars out there.

You’ve been a part of developing rallycross into a more popular discipline for the U.S. What do you think the future of the sport holds?

I think the future is pretty exciting and I think electric could be a big part of it. Many of us have come to the conclusion that GRC would be the perfect place to showcase electric vehicles. What you’re looking for out of these race cars is a lot of torque, which is what electric gives you, and the races are so short that range isn’t a concern.

So rallycross is actually the perfect place for people to go out and say, “Wow, those electric cars really perform." I think it will definitely help people understand the new technology more and maybe encourage fans to want to go out and buy an electric car. VW Motorsports