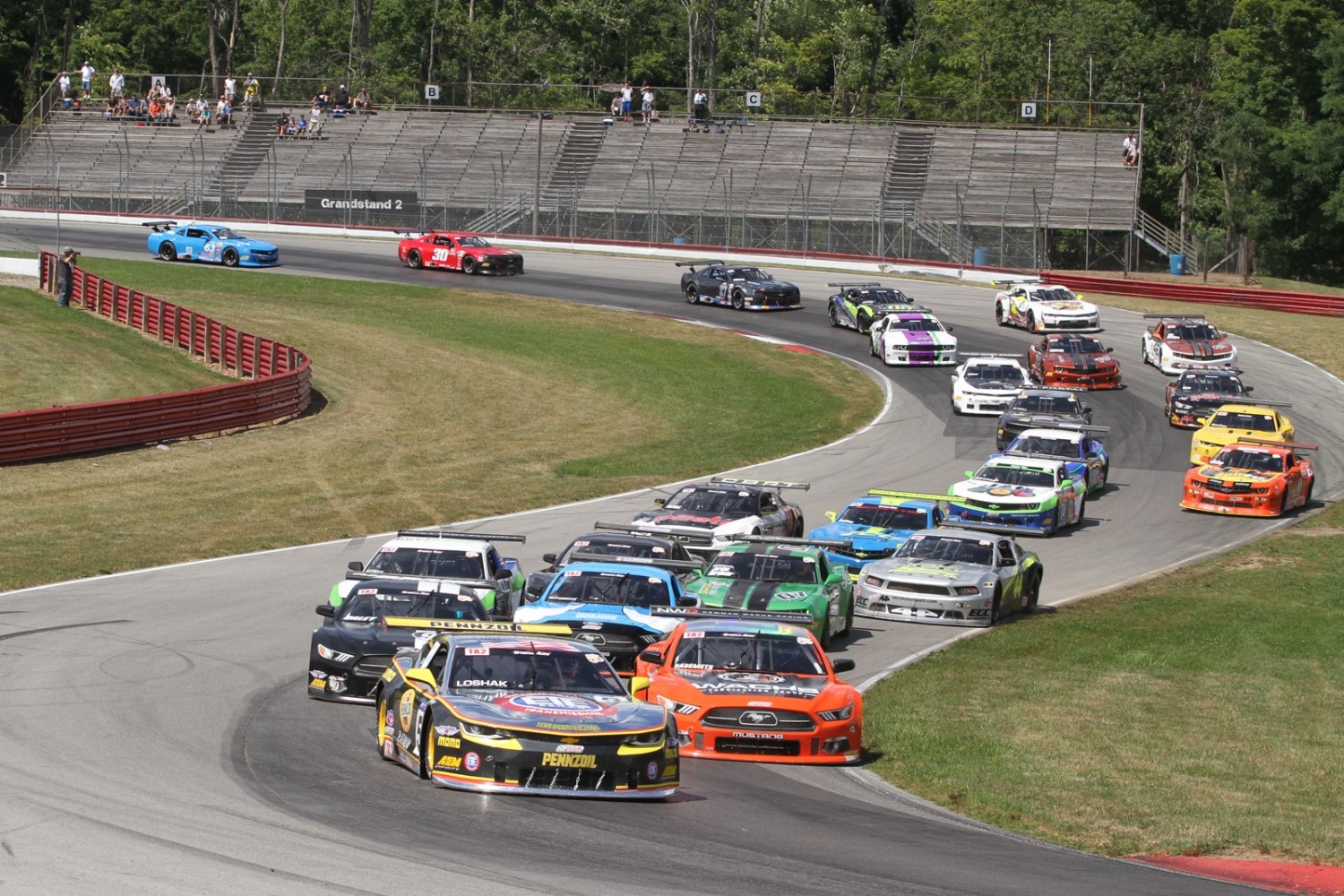 The Trans Am Series presented by Pirelli rolls into Mid-Ohio Sports Car Course for Round 7 of the 2017 Trans Am Championship ready to showcase a 51 car entry alongside the NASCAR Xfinity Series and the F4 US Championship for the track’s Mid-Ohio Challenge weekend.

The Trans Am slate for the weekend will feature two 101.96-mile competitions, 45 laps around the 13-turn, 2.258-mile course: The FirstEnergy Muscle Car Challenge featuring the modern day pony cars of the TA2 class and the FirstEnergy 100 showcasing a multi-class competition composed of the TA, TA3 and TA4 classes.

In the TA class, points leader Ernie Francis, Jr., in the No. 98 Buoniconti Fund Ford Mustang, enters the weekend riding the success of a rampant start to his TA class career after three championships in three years in Trans Am’s TA4 class. Now a fourth championship seems a definite possibility.

Two Ohio competitors will feature in the Trans Am class, including two-time champion Amy Ruman, in the No. 23 McNichols Company Chevrolet Corvette, of Stow, Ohio, who has become the face of the class in recent years. Ruman’s accolades in the TA class are numerous, 16 career wins, 38 podium appearances, 53 top five finishes while becoming first woman to win a Trans Am race and first woman to win a Trans Am championship— yet she has never climbed to the top step on her home track in her home state.

A Mid-Ohio win with family and friends alongside would be a crowning achievement for Ruman, finally something new in the career of a driver who has taken home nearly every piece of silverware the Series has to offer.

David Pintaric, of Canfield, Ohio, will also be on hand in his No. 57 Kryderacing Cadillac CTS-V. Pinatric, while not fielding a full season’s effort in 2017, has impacted every race he has entered this year capturing podium finishes in two of his three appearances. Pintaric’s success on the year and familiarity with the Mid-Ohio course should factor in throughout the weekend.

Defending class victor Simon Gregg, in the No. 59 Derhaag Motorsports Chevrolet Corvette, will also be in attendance— vying for a victory at a track he’s historically had success at, including an additional Mid-Ohio victory in 2012.

The TA class will also be the site of the race debut for two new sets of bodywork, the Chevrolet Camaro featured on the No. 50 GoShare/Axalta machine of Martin Ragginger and the Dodge Challenger on Jeff Hinkle’s No. 9 gogocreate.com/ Technical Realty entry. The addition of the two models stands as another step in adding diversity to the top class, which now includes the Ford Mustang, Cadillac CTS-V and Chevrolet Corvette as well.

TA2 will feature a raft of entries in pursuit of current points leader Gar Robinson, in the No. 74 Pura Vida Tequila/ 74 Ranch Resort Chevrolet Camaro, who enters the weekend after a career start to the year.

Entries also include 2016 TA2 champion Tony Buffomante, in the No. 34 Bestline Superior Lubricants Ford Mustang, and points runner-up Dillon Machavern, in the No. 24 Heritage Motorsports Ford Mustang, with both hailing out of the Mike Cope paddock. Shane Lewis, in the No. 72 Pura Vida Tequila/ 74 Ranch Resort Chevrolet Camaro, will also be in action and sits a single point behind Machavern.

Returning to TA2 action this weekend will be Rafa Matos, in the No. 88 3-Dimensional Services Chevrolet Camaro. This marks Matos’ second career Trans Am start, following a second place finish on Belle Isle in his debut earlier this year. Matos will be joined by team owner Doug Peterson, in the No. 87 3-Dimensional Services Group Chevrolet Camaro, a two-time TA class champion in his own right. Another returnee is Sheldon Creed, in the No. 77 United Rentals/ Speedlogix Dodge Challenger, his last appearance resulting in a fourth place finish in Detroit.

Ohio natives Aaron Quine, in the No. 21 Spillfix/ ECC Motorsport Chevrolet Camaro, and Matt Tifft, in the No. 26 Mike Cope Racing Ford Mustang, are slated to defend their hometrack, and state, in TA2 as well. This will mark Quine’s seventh start and Tifft’s TA2 debut, as Tift pulls double duty in Trans Am and Xfinity competition.

Running alongside the TA class in the First Energy Trans Am 100 will be Trans Am’s production racing contingent in the TA3 and TA4 classes.

Live Timing: All on-track sessions can be followed at www.gotransam.com and on the Race Monitor app available on Windows, Android, iOS and OSX.

Text Commentary: Updates provided throughout sessions on Twitter at @gotransam.

This weekend's event will be broadcast, tape delayed, on CBS Sports Network.