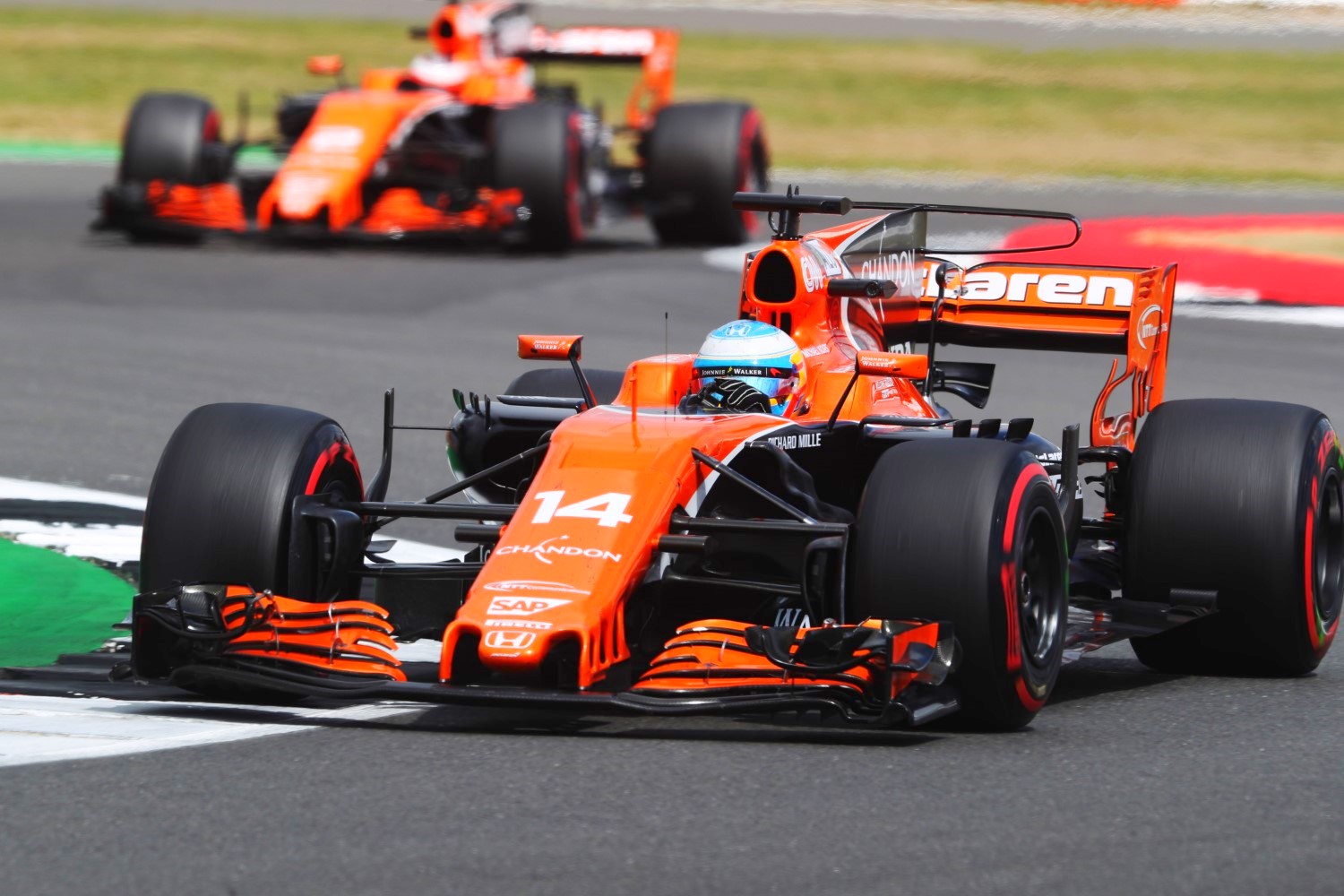 McLaren wants to keep Vandoorne, Alonso
(GMM) McLaren has confirmed claims it intends to line up with an unchanged driver lineup for 2018.

After setting blistering times in the post-Hungary test, teenager Lando Norris denied he might be a contender to replace Stoffel Vandoorne next year.

"I think McLaren is trying to keep the current lineup", he said, referring also to Fernando Alonso, who is yet to agree a new contract beyond 2017.

Belgian Vandoorne entered F1 this year with a brilliant junior career behind him, but the 25-year-old notably struggled alongside Alonso in the first half of the season.

But he has taken steps forward in the most recent races.

"The biggest problem was that we had so many technical problems that I hardly drove. It took me some time to understand what I had to do with this car to drive it really fast," Vandoorne said.

"Now I feel more comfortable so I'm closer to Fernando in pace, and I need to continue like that."

Indeed, while earlier there was some criticism from within McLaren management, the Honda-powered team's chiefs are now apparently happier with Vandoorne.

"Yes, we are happy with Stoffel," confirmed executive Zak Brown.

"He is in a difficult situation next to Fernando and with the reliability problems we've had, but we think Stoffel is a future world champion. We want to go with the same drivers next year."

(GMM) New F1 CEO Chase Carey has revealed that a new engine, cost cuts, and fairer income distribution should lead to better racing in the future.

Currently, the American says he is enjoying the Mercedes versus Ferrari battle at the front, but he said other teams should also be in the hunt to win.

"We are already putting some initiatives in place," he told Germany's Auto Bild.

"One is the new engine. Hats off to Mercedes, who mastered what we have now, but the different in performance is too great. So we want to simplify things with the motto: louder, cheaper, better.

"Another area is costs," the 63-year-old continued. "There are teams that spend $500 million a year right now, while for others it's $100m. This hinders and distorts the competition.

"The goal must be that the teams can make money in the sport, but the truth is that at the moment no team is making a profit," Carey added.

Nobuharu Matsushita said that his test with Sauber was "at another level" but the Honda development driver will not drive again for the Formula 1 team, as Ferrari will develop its Academy drivers with the Swiss outfit from 2018.

"I had been waiting for this moment since my childhood," said the 23-year-old Japanese Formula 2 driver after the in-season test at the Hungaroring. Matushita has taken two F2 wins this season for ART Grand Prix.

"It reminded me a bit of Japanese Super Formula," he said.

"Much faster than F2, but I didn't feel it was scary. That said, I was running with high fuel for the long runs, so the heavier car would hold the track better around the corner. On a light fuel run I'm sure it would be quite a thrill.

"I completed 121 laps and drank 6 liters of water. I think it all came out as sweat, as I still felt dehydrated. It was a very hot day and even hotter in the cockpit.

"I didn't have any problems physically during the program but, with the enormous G-forces on my body all day today, I suspect I might have a few aches in my muscles tomorrow," continued Matushita.

Sauber focused on long runs in Hungary and Matsushita finished 4.8s off the pace in the second day of testing, with Ferrari's 2016-spec engine providing diminishing returns as the season runs on.

With new chief Frederic Vasseur having called off the deal to run Honda engines from 2018, Ferrari will now supply the power units from 2018. Unlike this season's deal, based on year-old units, it will be a new specification engine.

As a result of the breakdown with Honda, Matushita will not test for Sauber again as this arrangement was a legacy from former Sauber boss Monisha Kaltenborn's tenure.

Kaltenborn also engineered the deal to use Honda engines and Vasseur looks to be rolling back the Honda influence as the Ferrari partnership continues. JA on F1

Despite Mercedes and Porsche recently announcing that they are to join Formula E from 2019, F1 CEO Chase Carey has made it clear he isn't concerned by the increase in manufactures' interest in the all-electric racing series.

With Porsche and Mercedes joining the likes of Jaguar, Renault, BMW and Audi with their Formula E involvement, Carey still questions whether Formula E should be seen as a viable motor sport. The American is keen, too, to point out the differences between the burgeoning electric racing series and Formula 1.

"The events of this week didn't change my view on Formula E one iota," Carey told Reuters' Alan Baldwin at the Hungarian Grand Prix.

"For the mainstream auto industry, there's clearly a direction towards electrical engines. Nothing that happened recently changed it.

"I think Formula E at this point is in many ways a combination of a street party for fans and sponsors and auto companies.

"For sponsors it is pursuing a corporate identification with a cause they like, for automotive companies R+D (research and development) and a technology they think will be a bigger part of their future.

"I'm not sure those things connect yet to make it a sport."

The American executive pointed to Formula 1's glamour and rich history, with its famous teams and racers, while also insisting on the sport's relationship with cutting-edge technology.

"We have state-of-the-art technology but we're first and foremost a great sport, with great heroes doing incredible things that are awe-inspiring and with fans around the world that are passionately loving the sport," said F1's new boss.

"They (Formula E) have a social agenda that is obviously important, the environment, and I respect that.

"There's an appeal to identifying with the environmental issue but I think they're very different propositions."

Red Bull reserve driver Pierre Gasly believes there will be developments regarding his future later this month, as he strives to graduate to Formula 1 with Toro Rosso.

Gasly has competed in Super Formula this season, alongside Red Bull reserve duties, which led to the Frenchman carrying out a day's worth of running in the RB13 in Hungary last week.

On his future hopes, Gasly commented: "My plan is of course to be with Toro Rosso on the grid, that's the target, to be on the grid in 2018.

"There are so many things are going on at the moment, hopefully it can turn out well for me, of course we need to wait, but definitely the plan is to be on the grid next year.

"I don't have any manager, so I speak straight with [Helmut Marko] and, you know, he's a really straightforward guy, so you know when something happens.

"He basically just calls you and says, 'OK, that's done', so at the moment we are having a good relationship.

"As you know it's really busy with the teams, with the engine supplier, many things going [on].

"It's a bit too early, we are only like [at the] beginning of August, but definitely I think this month we will hopefully have more news."

Gasly admitted being unable to secure an immediate graduation to Formula 1 was difficult, comparing his situation to that of a title-winning second-division football team.

"It's difficult but after winning GP2 last year of course your target is to be in Formula 1," he said.

"In football when you win the second league then after you aim for the first one and that's the same for me.

"That's my only motivation at the moment: I do a year as reserve driver for Red Bull, which is also useful for me.

"Hopefully when I will have my opportunity I will be at my best and be able to perform but at the moment we need to wait and see what's going to happen."

The "long-anticipated rebuilding" of the Hungaroring's aging facilities will "finally" get under way next year after the venue secured the required state support, according to Adam Cooper of MOTORSPORT.

The venue has "gone virtually unchanged" since the first grand prix was held in '86, and it has been "clear for some years that a revamp was essential."

The first job will be rebuilding the main grandstands and public areas, with the plan "being to create a modern stadium section running around the final corner and along the pit straight." That work will start in late '18, in preparation for the following year's grand prix.
Construction of a new race control and pit lane complex will follow in '20.

There are also plans for a visitors' center and museum MOTORSPORT