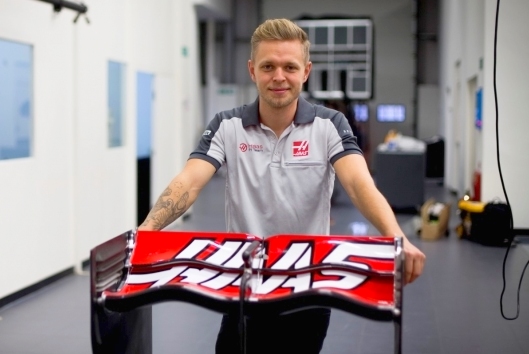 2018 contract 'not news to me' – Magnussen
(GMM) Kevin Magnussen says he was not surprised when Haas announced recently that it is keeping the same driver lineup for 2018.

The American team said before Hungary that the Danish driver will remain alongside Frenchman Romain Grosjean next year.

"I knew when I signed the contract that it was two years, so it's not news for me," Magnussen said.

"But I think it's important for the team and for myself, because hopefully we will have no more of these kinds of questions," he added.

Magnussen, 24, said certainty about his future is a new situation for him, having been at the Centre of speculation when driving for his previous teams McLaren and Renault.

"It's a nice situation, because for the two seasons I've done in formula one it's been frustrating to talk about contracts every race," he said.

Haas had a bad race weekend in Hungary prior to the August break, but boss Gunther Steiner said he is not worried.

"I wouldn't jump to conclusions," he told Ekstra Bladet newspaper.

"The midfield is so close that it can go either way every weekend. In Austria we were really good so it goes up and down," Steiner added.

(GMM) Valtteri Bottas has admitted he does not have a 'plan B' in the event Mercedes does not re-sign him for 2018.

While the Finn only has a single-year contract at present, it is expected that the German team will agree a new deal with the 27-year-old by September.

Indeed, Bottas thinks he has performed well enough so far this year that he does not have to worry.

"I feel like I'm well inside the team and I've only had positive feedback, so I'm not too worried," he told Auto Bild.

"I am honestly not looking around for any other team," Bottas revealed. "I want to start a long relationship with Mercedes, so that has priority."

(GMM) Honda is hoping better performance from its F1 engine will calm the troubled waters between the Japanese manufacturer and McLaren.

As the sport reaches its mid-season August break, rumors of a split in the works Anglo-Japanese collaboration are still circulating.

Indeed, a deal between Sauber and Honda for 2018 has already been cancelled.

"We are not with Sauber, so for now the only team we supply engines to at the moment is McLaren," Honda's F1 boss Yusuke Hasegawa is quoted by Spain's AS newspaper.

There are claims Toro Rosso is being lined up by Honda as a substitute engine customer.

"I will not comment on rumors," McLaren team boss Eric Boullier said. "It is up to Honda to decide on possible customers."

Another rumor is that a customer Renault deal is lined up as McLaren's only engine alternative for 2018, with a decision expected in September.

Honda thinks that better reliability and performance, like that seen in Hungary, will calm the troubled waters of the McLaren-Honda relationship.

"I'm glad we were able to show some results," Hasegawa said after Hungary.

"We did not see any problems (in Hungary) so it was the first time that I was not worried about finishing the race.

"There is no doubt that we would like to continue to cooperate with McLaren. I think that with better performance we will continue to work together," he added.

Honda thinks it can overtake Renault this year

Honda can leapfrog engine rival Renault before the end of the 2017 Formula 1 season, believes its motorsport chief Yusuke Hasegawa.

Since rejoining F1 with McLaren in 2015, Honda has been fourth in the engine pecking order behind Mercedes, Ferrari and Renault.

After changing its design concept over the winter, Honda has struggled for performance and reliability this year – which in turn has put a strain on its relationship with McLaren.

But Honda has shown progress in recent races, with the team scoring its first points in June's Azerbaijan Grand Prix – where it introduced a 'spec 3' engine – followed by a double-points finish in Hungary last time out.

"I think we can keep the same ratio of the increasing of the power but it is difficult to catch up Mercedes or Ferrari," Hasegawa told Autosport.

"I really want to move ahead of Renault in terms of performance before the end of the season."

When asked if he believed that would be a genuine possibility, given Honda's current horsepower deficit to its rivals, Hasegawa replied: "Yes, I can see that on the data.

"I will not tell you the number, but we are closing the gap."

Hasegawa added he felt this was the closest Honda has been to its rivals since returning to F1. Autosport

(GMM) Monza is enjoying boosted ticket sales as a direct result of Ferrari's better performance in 2017.

That is the claim of former F1 driver Ivan Capelli, who is now involved in organizing the fabled Italian grand prix as the Milan automobile club chief.

After a ten-year title drought for Ferrari, Sebastian Vettel is leading the 2017 world championship.

"We have already sold 35 per cent more tickets than last year around this time," Capelli told the Dutch publication Formule 1. "We expect a full house."

He said Italian excitement about Ferrari's season and championship chances is palpable.

"No longer do you hear people talk only about football," said Capelli. "Formula one is the main discussion over cappuccino now.

"I really believe that Vettel can be world champion," he added.

(GMM) Speculation about Max Verstappen's future will calm down once Red Bull gives him a winning car.

That is the view of Red Bull team boss Christian Horner, when asked by the Dutch publication Formule 1 about constant rumors connecting the 19-year-old with Ferrari.

Verstappen is under contract until the end of 2019, and Horner said it is pointless to consider the future beyond them.

"A contract must reflect mutual interest," he said.

"It does not make sense to talk about the longer term because we must first offer him a car that he can win with," Horner added. "I am convinced that once we succeed there will be no team for which he would rather drive."

However, although Red Bull has improved recently, Verstappen has had a particularly bad first half of 2017, marked by reliability problems and now a clash with teammate Daniel Ricciardo.

Asked how Verstappen is coping, Horner said: "Very maturely, especially when you consider how young he is. In England, Max can't even rent a car!

"It's impressive how he deals with the pressure, expectations and interest, especially from the Netherlands," he added. "As a driver he is becoming stronger but also as a human."

Asked where Verstappen can still get better, Horner answered: "No one is perfect, so it's always about improving in small ways.

"That's also exactly the way we work as a team. While already at a high level, Max has the same desire to get more and more out of himself."

(GMM) Lando Norris has calmed speculation he could be about to burst into formula one.

The 17-year-old Briton, who is a McLaren junior driver, staked a claim on future F1 superstardom last week by beating Fernando Alonso's qualifying time in the post-race test at the Hungaroring.

Norris is currently a title contender in European F3.

"I am sure that next year I will not be in F3 again," he is quoted by the Finnish broadcaster MTV.

"I think McLaren is trying to keep the current (F1) lineup, so I think for me it will probably be either Formula 2 or Super Formula in Japan."

(GMM) Chase Carey says he does not have a personal favorite for the 2017 title.

While Lewis Hamilton is the superstar and Sebastian Vettel does not even have social media accounts, F1's new CEO told Auto Bild he is more than happy the duo are fighting it out for championship spoils.

"There is no mold from which a hero is cast," said the American.

"We need different personalities and Vettel is one of the great protagonists of our sport, even if he is different from Lewis."

So when pressed upon who he is really cheering for, Carey smiled: "You mean the German driver with the Italian car or the Briton in the German car?

"I'm always asked and I always say I just want a good race."

Indeed, Bernie Ecclestone's successor said he is happy the races have been more exciting in the first half of 2017, adding: "My wish is that the championship remains open until Abu Dhabi."