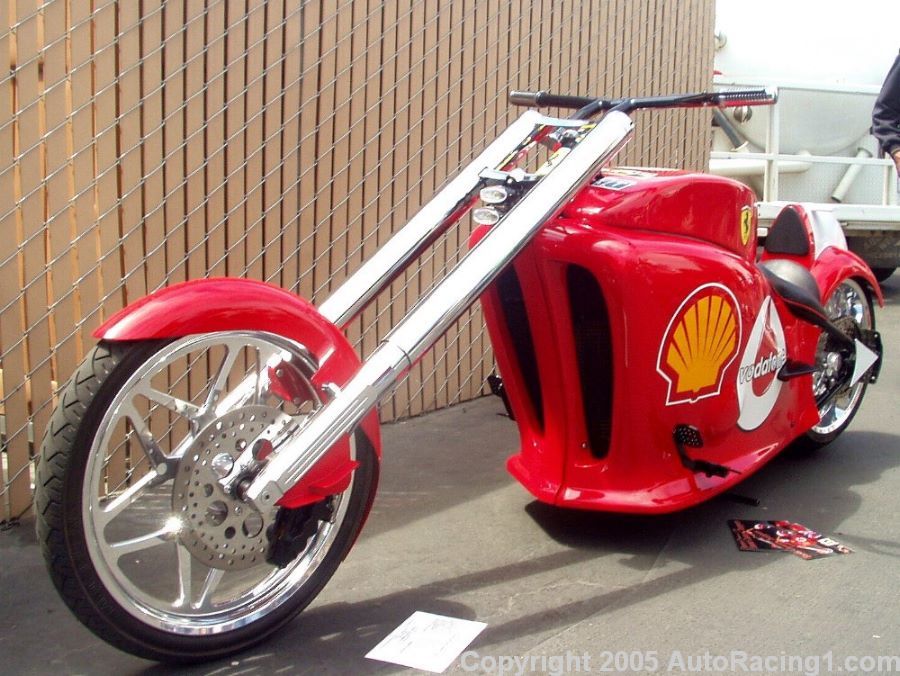 UPDATE #6 Speculation linking Valentino Rossi and formula one is a bit like Kimi Raikkonen — fast and furious, but not necessarily bursting with info. There are, though, the commentators. The latest is Superbike rider Neil Hodgson, who told the UK's Sun newspaper that he reckons the hugely talented Italian will indeed make the four wheel switch.

Asked if a bike-to-car transformation would be possible, Hodgson answered: ''I think we're going to get a chance to see that. Rossi is going to switch at some point.''

Rossi, 26, has tested Michael Schumacher's Ferrari and qualified for an FIA super license. Hodgson added: ''If anyone can do it, he can.''

Ask those a little closer to the action, though, and it's a slightly different story. Rossi's crew chief, Jeremy Burgess, reckons Valentino – although often gushing about rallying – has ''never spoken to me about F1. ''Never mentioned it.''

However, it's always better to watch what Rossi does. For one, he tested the scarlet car, and – maybe also significantly – he is believed to be kicking up a stink about running in Gauloises blue tobacco colors on his Yamaha in 2006. Why? He doesn't like tobacco? Wrong. His Ferrari was sparkling in Marlboro red. Tipped for a part time Ferrari testing job next year, perhaps the clashing of cigarette brands was the factor.

With this sighting at Fiorano, it appears Ferrari may be developing a new MotoGP bike for Valentino Rossi. In reality this photo was taken at the Monterey Historics…… 08/23/05 Jean Todt says it is possible that MotoGP megastar Valentino Rossi could do some more testing at the wheel of a Ferrari. The 26-year-old Italian, perpetually linked with a future switch to a four wheeled category such as formula one, has already completed three days at the marque's Fiorano circuit in Italy.

''I'd say at the moment that we are helping him more than he is helping us,'' Todt – the Maranello principal – said. ''He can do some more testing if he wants to.''

Asked whether Rossi's role might become more serious in the future, Todt did not deny the obvious talent of the rider. ''You never know,'' the French born boss replied. ''Maybe he can help us in the future.''

In a media briefing at Istanbul on Sunday, Todt also revealed that Felipe Massa was compelled to honor his Ferrari contract in 2006 despite a long term BMW offer. ''We took him,'' Jean confirmed, ''but he is happy to come.''

08/12/05 Valentino Rossi's link with Ferrari continues to strengthen, with news that he will now test parent carmaker Fiat's new 'Punto' rallying car. The 26-year-old MotoGP champion, who last week did an extensive F1 test for the scarlet marque, is tipped to get at the Punto's wheel in September.

''I don't think he'll move to F1,'' Fiat's Lapo Elkann told La Gazzetta dello Sport, ''not in the short term at least. I would like for him to compete (with the Punto). He will decide … after the test.''

08/10/05 According to an article in this week's Italian Autosprint magazine, Valentino Rossi’s two-day testing session aboard last week at Fiorano was intended for Rossi to complete the minimum testing mileage of 186 miles in two days that is required for an FIA Superlicense.

The Autosprint report said Rossi's best lap of 57.2 seconds, was just 1.5s shy of Michael Schumacher's track record. Rumors suggest that Rossi could be an official test driver next year ahead of a racing role in 2007, when both Michael Schumacher’s Ferrari contract and Rossi’s Yamaha contract are set to expire. Everyone is speculating that Schumacher will retire then.

08/03/05 At the end of the second day of testing at the Fiorano track, the Moto GP World Champion Valentino Rossi has expressed his satisfaction: “I wanted to get a better understanding of a Formula 1 car – said Valentino Rossi – and I would like to thank Ferrari for giving me the opportunity to do so. The two days were intensive and interesting. I completed a lot of kilometers and I began to understand the handling of the car, working with the engineers and marc Gené. I go back to the two wheels where there is still a long way to go to the end of the season." Ferrari 08/02/05 Speculation is increasing that the immensely popular Italian, Valentino Rossi, could replace Michael Schumacher in the Ferrari F1 car in 2007. Rossi has nothing left to prove in MotoGP. Even when he switched from Honda to Yamaha he demoralizes his competition, passing and winning at will.

The six-time MotoGP champion tested a Ferrari Formula One car Tuesday, just one day after extending his contract with Yamaha's MotoGP team for another season. Rossi requested the testing session, and was watched by Ferrari president Luca Cordero di Montezemolo at the team's private Fiorano circuit. He drove last season's Ferrari model, the F2004, in an extended testing session that lasted much of the day. Rossi first tested a Ferrari in April 2004.

His contract now ends at Yamaha the same time Schumacher's ends at Ferrari – the end of 2006. If he can drive an F1 car as well as he can ride a motorcycle, Ferrari would have the perfect replacement for 7-time World Champion Schumacher. If Rossi does end up racing for Ferrari, he would have the chance to become the first Italian driver to win a title for the Italian team in 50 years. The last was Alberto Ascari in 1952 and '53.