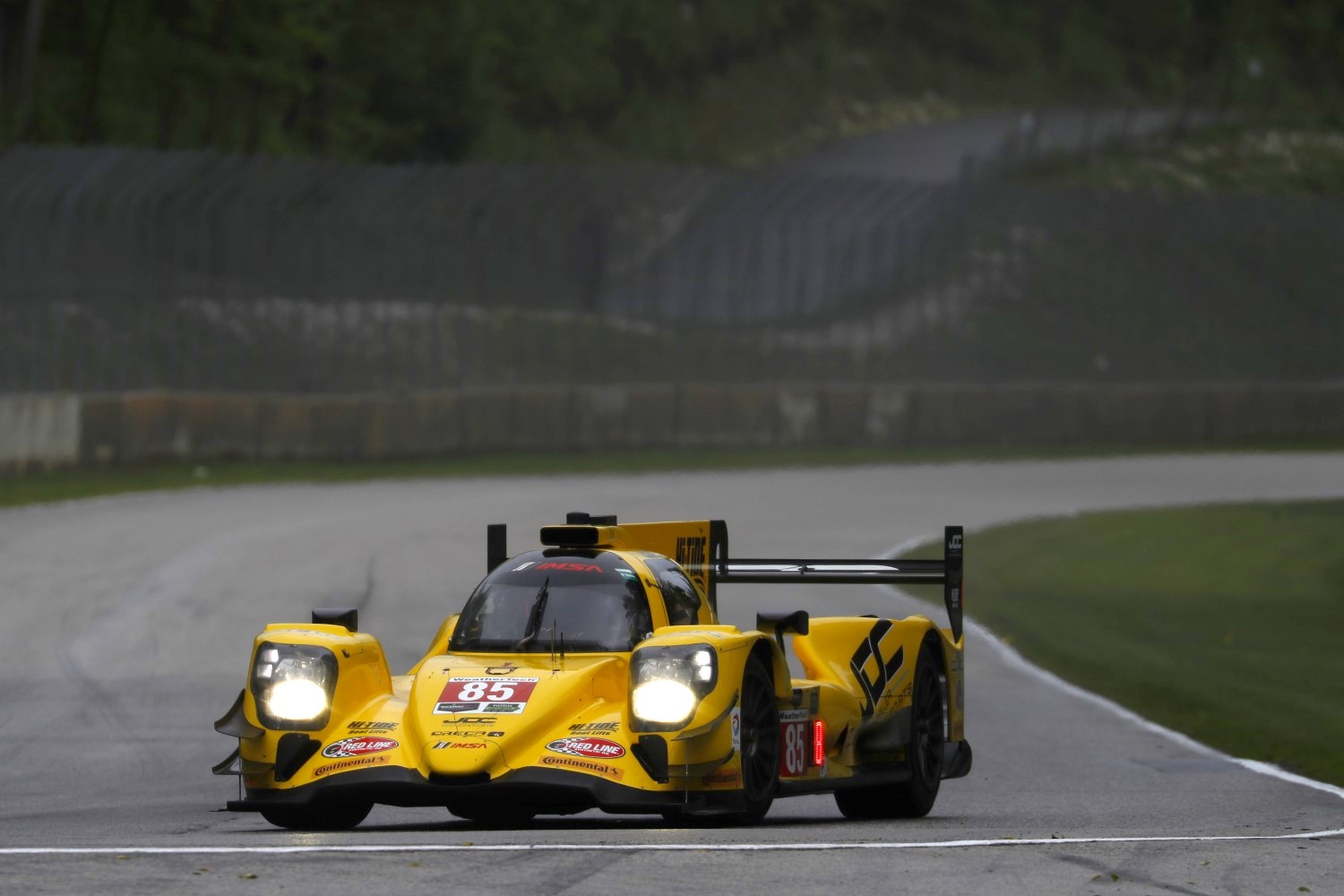 ELKHART LAKE, Wis. – While the team heads into Sunday’s Continental Tire Road Race Showcase still looking for its first IMSA WeatherTech SportsCar Championship race victory, Stephen Simpson and the No. 85 JDC-Miller Motorsports team might be carrying the most momentum of anybody in the Prototype class.

Simpson provided the latest example of that on Friday afternoon at Road America, when he posted the quickest time of the day on his second-to-last lap. He toured the scenic, 4.048-mile circuit at 1 minute, 55.057 seconds (126.657 mph) in the bright yellow ORECA LM P2 prototype.

“It’s always nice to end a practice P1, especially because I think we were on the opposite end of the charts before then," Simpson said. “I got in right at the end of the session, did a few laps, realized the car wasn’t quite where we needed it to be. I came in and the guys made a good change and I was able to go out and get one lap before the checkered flag came out. Really, credit to JDC-Miller Motorsports. These guys are great."

The team has come on strong particularly since finishing second in the Sahlen’s Six Hours of The Glen early last month. Simpson and co-driver Misha Goikhberg also finished second in the most recent race for the Prototype class, the Mobil 1 SportsCar Grand Prix at Canadian Tire Motorsport Park on July 9. In addition, the team announced a week ago plans to add a second Prototype to its stable for 2018.

“We definitely have some positive momentum going at the moment, not just on track, but also off track with the announcement of our second car, so that’s very positive," Simpson said. “Honestly, the last couple of races, we’ve arrived at the track with a good car. We’re understanding our car very well now, and it’s nice to get to the track. Even if the car isn’t just where I want it to be, I know what we need to do to get it there."

“Today, we tried some stuff," Hand said. “We weren’t the quickest in the whole session, but we were able to put a lap down. Dirk put a lap down and we were P1. We love to be P1, but we’ve still got some work to do to make a good race car. That’s always what we’re looking for is to have a good race car at the end. Somehow, some way, in all of the races I’ve done here, most of the races have come down to the last 10 minutes and been a dogfight, so you want a car at the end.

And in Hand’s opinion, there’s no better place to dogfight than Road America, especially with a strong car.

“The cool thing is, to me, this is the greatest racetrack in the world," Hand said. “I love the lap here. Just driving a lap here – even my son loves the lap in sim racing. This is just a fun racetrack to drive. When you have a car that’s dialed in, that’s even more fun to drive."

Colin Braun may hail from Texas, but actually considers Road America a home track. How’s that, you ask?

“My family is from around here," said Braun. “My dad was born and raised not far from here, my uncle and all my cousins still live up here, so I guess maybe this is a bit more of a home race than maybe COTA is for me, so it’s cool."

He made himself right at home on Friday at Road America, clocking the best time in GT Daytona (GTD) practice for Sunday’s Continental Tire Road Race Showcase at 2:06.963 (114.779 mph) in the No. 54 CORE autosport Porsche 911 GT3 R he co-drives with Jon Bennett.

“It’s good to end up quickest," Braun said. “I’m proud of these CORE autosport guys, it’s been a trying year, no doubt about that. They’ve worked hard, Jon’s been working on his end of it really hard. I think this is obviously a good sign to start the weekend. We qualified strong in Lime Rock and I think we’ve had a lot of speed this year, we just haven’t been able to quite put it all together and produce a result that I think these guys certainly deserve."

It’s been a dream season for James French in the Prototype Challenge (PC) class this year with six wins in six starts alongside co-driver Pato O’Ward, including prestigious Tequila PatrÃ³n North American Endurance Cup victories in the Rolex 24 At Daytona, Mobil 1 Twelve Hours of Sebring Fueled by Fresh From Florida and the Sahlen’s Hours of The Glen.

But for the Sheboygan, Wisconsin resident, a win at his home track of Road America this weekend would be equally special. Despite regularly competing in and winning club races at Road America, French has yet to win a professional endurance sports car race at the track.

If Friday’s practice sessions are any indication, win No. 1 may finally come this weekend with French and O’Ward topping the charts in each of the day’s two practice sessions in the No. 38 Performance Tech Motorsports ORECA FLM09.

“I’ve been so close so many times, but never finished first," said French, who has three podiums and a runner-up finish in five starts at the track. “It would be a huge relief to finally get one here."

The IMSA Continental Tire SportsCar Challenge returned to track Friday in primarily wet conditions at Road America in two practice sessions ahead of tomorrow’s qualifying and Road America 120, the seventh of 10 rounds on the 2017 schedule.

Muehlner Motorsports America, in Grand Sport (GS) with an all-new driver lineup in its No. 21 Porsche Cayman GT4, consistently turned fast laps in both sessions and posted the best time of the day at two minutes, 35.841 seconds in the morning session.

Moritz Kranz and Gabriele Piana were slotted into the car for this weekend only days ago. Kranz, who competed with the team in this year’s 24 Hours of NÃ¼rburgring, has one previous race in the United States on his résumé and for Piana, who was credited with the fastest lap, tomorrow’s Road America 120 will be his maiden race in the United States.

“Nowadays, you can train a little bit on the simulator, but I didn’t have time for that so I just started taking notes on videos yesterday in the hauler," said Piana. “Both of us just came in with no expectations. We just had to go out and do what we can."

Piana connected with Muehlner last year at Circuit of The Americas, assisting with driver coaching and helping to install an advanced telemetry system that his team in Europe utilized.

“For this race, it turns out he needed drivers and first of all, Moritz was the natural choice because he’s racing with Bernhard in VLN in Germany," he said. “Then you have to ask him why he called me instead of somebody else. He sent me a text when I was at the 24 Hours of Spa, and he told me, ‘Yeah this is happening and do you have time?’ I said ‘Yeah, I will make time.’"

Kranz and Piana finished the afternoon’s practice behind only the No. 57 Stevenson Motorsports Chevrolet Camaro GT4.R of Matt Bell and Robin Liddell, who are riding a two-race win streak in the class.

In Street Tuner (ST), the Freedom Autosport pack continues to show its speed, coming off a pole and subsequent win at Lime Rock Park just two weeks ago.

In the afternoon practice session at Road America, Andrew Carbonell in the No. 26 Mazda MX-5 posted the fastest ST lap of the day at two minutes, 44.103 seconds. He and co-driver Liam Dwyer will be going for their first win of the season tomorrow, having a best finish of fourth so far in 2017.

“I think the most entertaining thing about racing in the rain is that no two laps are the same," Carbonell said. “Every lap is different and as the track dried throughout the session, you had to change everything you did.

“The Freedom Autosport guys have done a great job. Our Mazda MX-5 has been on rails. It’s pretty satisfying to put an MX-5 at the front, at the point of the field here at Road America which is not historically great for us. But I’m happy to bring the momentum into tomorrow’s qualifying and see how we can do."