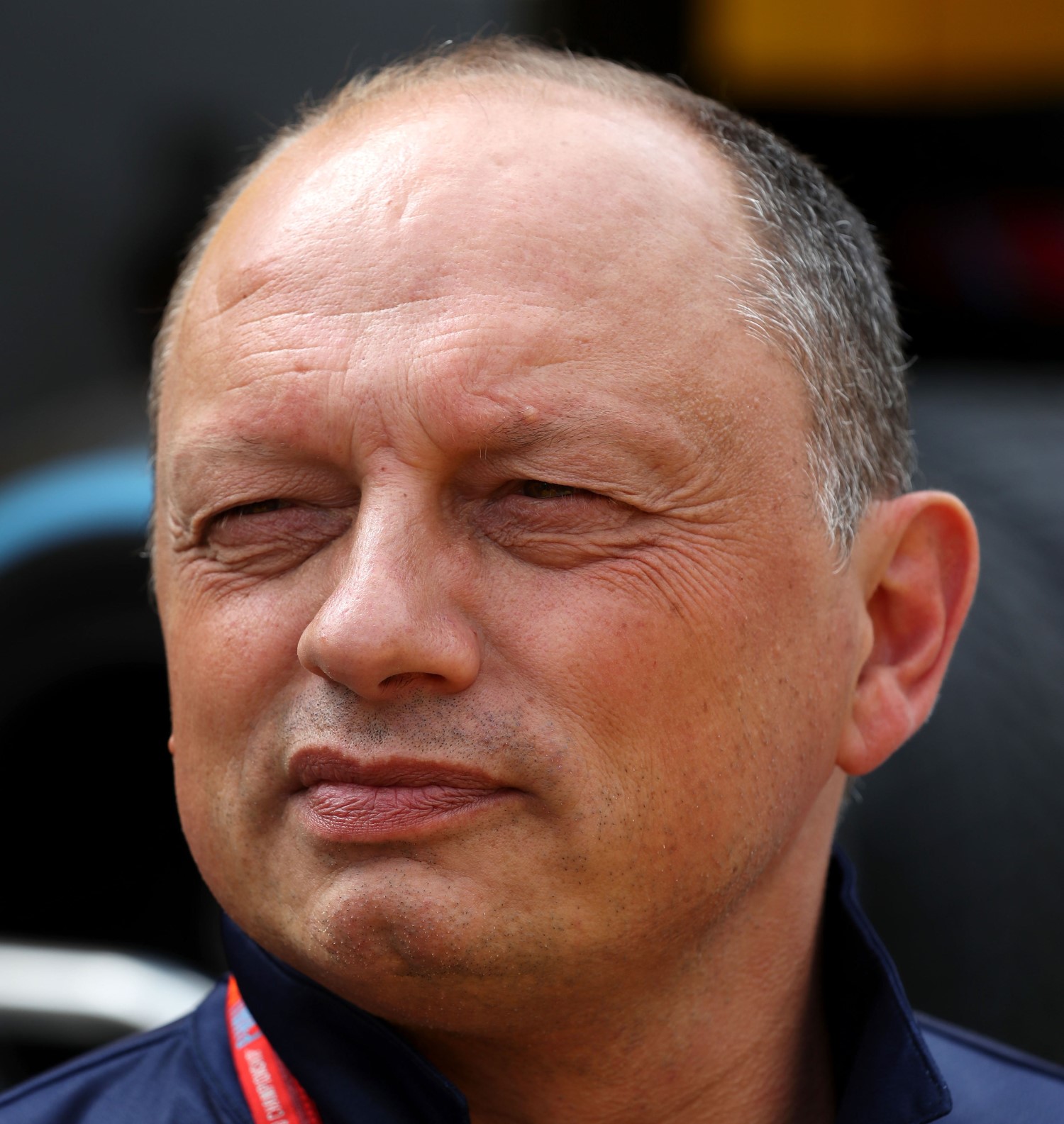 Sauber not targeting top teams – Vasseur
(GMM) Sauber's new boss says the Swiss team is targeting the front of the midfield for the future.

The 25-year-old F1 team almost collapsed in the last couple of years, but now with a new owner and former Renault chief Frederic Vasseur in charge, the future appears brighter.

"We have no ambition to beat Mercedes and Ferrari in the short term," Frenchman Vasseur told the French publication Auto Hebdo.

"But we do need to catch up with the private teams as soon as possible, such as Williams and Force India. It is necessary to be in the fight for the podium."

Vasseur said Sauber's strategy for the medium-term is therefore no longer mere survival.

"Before joining Sauber I had to make sure the team has the resources and the ambitions," he said.

"It will be difficult to achieve something in the short term, but I think the basics are there," Vasseur continued.

"Compared to other teams, the facility is impressive, the wind tunnel is a good one, and I think the team spirit is comparable to what I saw last year in Enstone.

"Now that the financial structure is stabilized I think we can have some hope for the future."

(GMM) Gerhard Berger says it is difficult to judge the potential of young drivers based on this week's testing in Hungary.

He was undoubtedly referring to the likes of Charles Leclerc, who shone in the Ferrari, but also the British teen Lando Norris, who beat Fernando Alonso's qualifying time in the McLaren.

But F1 legend Berger said: "The teams all use different strategies.

Berger's own nephew Lucas Auer was also testing in Hungary, and the former McLaren and Ferrari driver said: "I think Lucas was able to show what he could do."

What comes next for Auer, however, is very unclear. The 22-year-old drives full time in the German touring car series DTM, but his employer Mercedes has just announced its departure after 2018.

"Of course that complicates the situation," Berger, the DTM series boss, admitted.

Mercedes is leaving Formula E to join a host of carmakers in Formula E, but Berger is not sure the all-electric series would be the right move for Auer.

"If a driver has to go from one car to another after a few laps, it's a demo rather than a race, but maybe it will be different in the future," he said.

He also said spectator and TV numbers are low for Formula E, which is not the case in DTM.

"I absolutely assume that there will be a DTM even after 2019," said Berger.

(GMM) Nico Hulkenberg says he is not bothered about being edited out of an official F1 video about the controversial 'Halo' concept.

In Hungary last weekend, drivers including Hulkenberg commented during the official press conference about news the FIA is introducing the controversial cockpit protection system for 2018.

"I was never a big supporter of Halo or additional head protection," said the Renault driver.

"It will protect against the one in a million freak accident, but the tethers that keep the tyres on get better every year so I'm not sure this additional protection is necessary and we're compromising the looks quite a lot," he added.

But when an official video was made about the drivers' comments, only those with positive views were included.

A spokesperson for Formula One Management said it was an "editorial decision".

Asked what he thinks about being censored out of the debate about Halo, Hulkenberg said: "I'm quite relaxed about it. There's no bad blood.

"It's just like it is in life: opinions differ," the German added.

However, there may be a silver lining in the Halo controversy for F1 fans, with rumours the FIA and FOM will install rearward-facing cameras in the device next year to provide an unprecedented view of the drivers' faces.

(GMM) Pascal Wehrlein has played down claims he could keep his racing career alive in Formula E next year.

This week, we reported that with Ferrari looking to make Sauber its junior team in 2018, the Mercedes-backed Wehrlein is likely to be shown the door.

"I have scored all five points," the 22-year-old told Bild newspaper, "and in qualifying it is 8:2 for me against Ericsson. What more can I do?"

Reports have suggested Wehrlein could return to DTM, where he won the title in 2015, but Mercedes is pulling out of the German touring car series after 2018.

"I got a message shortly before the announcement as I know some people at HWA," said the German. "I think it's not a simple situation."

The reports suggested Formula E – Mercedes' next destination – could be another alternative for Wehrlein.

But Wehrlein insisted: "I like noise, performance and fuel. I cannot even imagine racing in Formula E."

However, Formula E is becoming ever more popular, especially among car manufacturers who see the future of motoring with electric power.

Ferrari president Sergio Marchionne said: "I have been speaking about Formula E with Toto Wolff, but I cannot imagine Ferrari going straight there.

"But we are considering entering a brand of the FCA (Fiat Chrysler), although which brand has not yet been determined," he added.

Wehrlein's boss, meanwhile, warned the current Sauber driver not to get too down about the current rumours of his F1 demise.

"There are many movements on the market," Mercedes chief Wolff said. "In the next two weeks, a few interesting things could happen."

Sebastian Vettel is confident that Ferrari will keep pace with Mercedes over the second half of the season, insisting "we know what we need to do".

Vettel heads into the summer break 14 points clear of Lewis Hamilton, after victory in Hungary, where Ferrari also closed on Mercedes with a 1-2 finish.

Ferrari has won only one race post-July in six years, when it triumphed in Singapore in 2015, but Vettel says the team now has "all the ingredients" to change that.

Commenting on his mid-season title lead, Vettel said: "I think it's more important to lead after the last race, but for sure if you could choose, that's the position you want to be in.

"Equally, the season is long, there are a lot of races to come, and a lot can happen.

"But I think we have all the ingredients that we need to stay there [at the front of the field] and hopefully have a good rest of the season."

Vettel completed two hours of running on the second day of the Hungaroring in-season test and is clear on where Ferrari can improve the SF70H.

"It's important to get in the car outside a race weekend when you have a bit more freedom to try some stuff, both for the team and also for the driver," he added.

"We tried some small things just to get a feel, and the feeling was good.

"I think we know in general after so many races what we need to do, but we'll have a bit of a break for everyone, which is important, then we'll start again."

Vettel last led the championship standings at Formula 1's summer break back in 2013, when he went on to secure a fourth world title with Red Bull.

Ferrari has suggested that it will continue to field Sebastian Vettel and Kimi Raikkonen in Formula 1 next year, with an announcement expected at the Italian GP, the second event after the summer break.

Vettel and Raikkonen have raced alongside each other since 2015, but both drivers are out of contract at the end of the year, prompting speculation over their futures.

Ferrari President Sergio Marchionne recently insisted that Vettel's future is in his own hands, though called on Raikkonen to improve, describing him as "a bit of a laggard".

However, speaking at the Hungarian Grand Prix, where Vettel and Raikkonen secured a 1-2 finish, Marchionne indicated that the partnership will continue into 2018.

Asked if Ferrari will announce its line-up at Monza, the team's home race, Marchionne said, "I hope so", before adding a "Yes" to the possibility of Vettel and Raikkonen.

Pushed on a percentage for the Vettel/Raikkonen partnership continuing, Marchionne commented: "Probably better than 50 per cent – we will see."

Vettel and Raikkonen's 1-2 at the Hungaroring was their second of the season, after Monaco, and brought Ferrari back within 40 points of Mercedes, the team having drifted away at previous races.

Vettel is 14 points clear of Mercedes rival Lewis Hamilton, who finished fourth in Hungary, while Raikkonen holds fifth overall, 86 points behind his team-mate.

Leclerc made clear that he is "ready" for Formula 1, after testing for Ferrari earlier this week, while Giovinazzi admits another year on the sidelines would be "really, really hard".