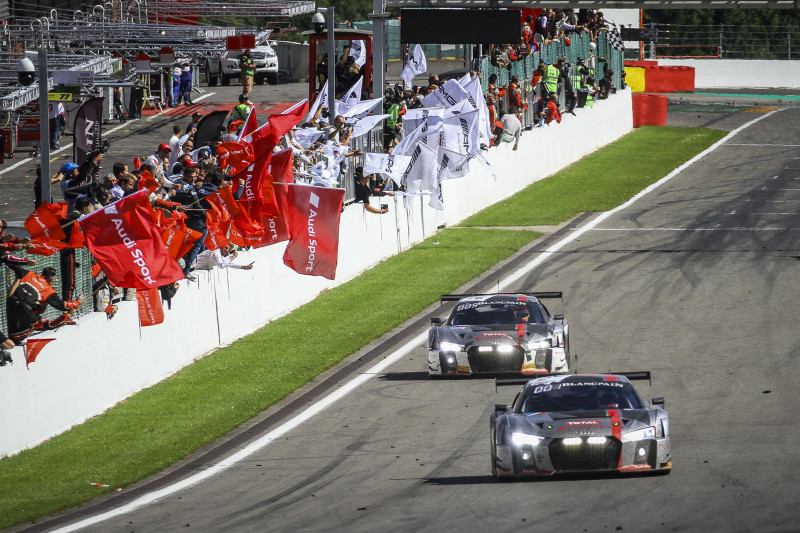 For the fourth time, after earlier success in 2011, 2012 and 2014, an Audi was the first car across the line in the Total 24 Hours of Spa, the world’s biggest GT3 race and the undisputed season highlight of the Blancpain GT Series. After 546 laps of the 7.004 kilometers long Circuit de Spa-Francorchamps, German driver Christopher Haase drove the #25 Audi Sport Team Sainteloc Audi R8 LMS across the finish line to secure victory for himself and teammates Markus Winkelhock (GER) and Jules Gounon (FRA).

With second place for the #8 car, Bentley Team M-Sport made up for its misfortune in last year’s race at Spa. The #90 Akka ASP Mercedes rounded out the top three with the second consecutive podium finish at Spa for the French team. Mercedes-AMG took Pro-Am class honors with a strong performance by the #16 Black Falcon team while the #888 Kessel Racing Ferrari led almost throughout to score a commanding Am class win. The Belgian Speedlover team won the national class with its #991 Porsche.

With 63 cars taking the start and no fewer than 36 of them competing for overall honors, there was no doubt that this year’s running of the Total 24 Hours of Spa had one of the strongest entries ever in the history of the Belgian endurance racing classic. Qualifying had already made it clear that a fierce battle could be expected among the teams representing the world’s most prestigious sports car brands, and the race duly delivered.

Once the field was released after one formation lap of the 7.004 kilometers long circuit, it was ex-Formula 1 driver Giancarlo Fisichella who made the best use of the pole position and took the lead with the #55 Kaspersky Motorsport Ferrari, ahead of compatriot Mirko Bortolotti in the #63 GRT Grasser Racing Team Lamborghini and Kevin Estre in the #117 KÃœS Team75 Bernhard Porsche.

While the Ferrari and the Lamborghini shone at the front of the field throughout the first hours of the race, the second hour saw the first of several full-course yellows and a subsequent safety car intervention due to a severe crash by Thai driver Pasin Lathouras, who lost control of his #50 AF Corse Ferrari at the top of the Raidillon. Luckily, the driver walked away unscathed.

Several teams used the neutralization to come in for pit stops with the different pit stop strategies applied by the teams leading to frequent position changes throughout the field. Meanwhile, it was also clear that the Race Control was watching drivers’ antics closely as there were penalties galore, particularly for track limit infringements.

Temperatures were above 20 degrees until midnight, allowing the thousands of spectators to enjoy the entertainment both on and off track, including the Music Festival with several top-line DJs and live acts on a balmy Saturday evening. During the night, however, the rain shower that so many had expected finally arrived, spicing up the action even more whilst also making it more challenging for the drivers, as if the Spa-Francorchamps circuit wasn’t challenging enough in itself. Most drivers opted for rain tires, but some gambled and stayed out with slicks. There were incidents, too, including a collision that put two Mercedes cars out at once, the #00 Good Smile Racing car and the #18 Black Falcon Mercedes. Earlier on, the #88 AKKA ASP Mercedes had already retired after a crash.

Halfway through the race, points were attributed again and this time, it was the #63 GRT Grasser Racing Team Lamborghini who claimed the full score ahead of the #85 HTP Motorsport Mercedes and the #55 Kaspersky Motorsport Ferrari. In the 14th hour, the #77 Barwell Motorsport Lamborghini and the #11 Kessel Racing Ferrari collided at Stavelot corner, after which the Lamborghini caught fire. Its driver, Adrian Amstutz, was taken to hospital in Liege where he was diagnosed with second-degree burns and a broken rib. The Ferrari driver, Matteo Cressoni, was transferred to hospital in Verviers for a check-up. There was well-deserved praise for the track marshals and rescue teams for their quick intervention.

A little bit later, the Kaspersky Motorsport team that had led the race for many hours saw its hopes of a possible victory evaporate as Marco Cioci came off track at the Raidillon with damaged steering, the result of contact with the #90 Akka ASP Mercedes at La Source. About two hours later, the other Italian GT car that shone for a long time, the #63 GRT Grasser Racing Team Lamborghini, retired when Christian Engelhart crashed out at Les Combes with brake issues.

This effectively turned the battle for the lead into an almost entirely German affair with the Porsche, several Audis, the #98 ROWE Racing BMW and a number of Mercedes-AMG cars in contention, while the #8 Bentley Team M-Sport Bentley defended British honors. Suspension issues then put to an end ROWE Racing’s ambitions of a repeat win after their 2016 success.

In the afternoon, the Sainteloc Audi emerged as the main candidate for success and as the last car from the group of the front-runners, the #117 KÃœS Team75 Bernhard Porsche, completed his final pit stop on lap 527, it was left up to German driver Christopher Haase, who had pitted six laps earlier, to bring the Audi across the finish line, which he duly did after 546 laps, scoring Sainteloc’s first 24-hour race win as an Audi Sport team. The #8 Bentley came second ahead of the #90 Akka ASP Mercedes. The #117 KÃœS Team75 Bernhard Porsche was classified fourth, making Laurens Vanthoor the best-placed Belgian driver in the overall classification.

Pro-Am honors for Black Falcon
The #97 Oman Racing Team with TF Sport Aston Martin led the Pro-Am class for the opening hours of the race, but a spirited drive with consistently fast lap times resulted into good progress for the #16 Black Falcon Mercedes that then moved up into the lead of the class in the evening and held on to its class lead throughout the race. Its drivers Oliver Morley, Miguel Toril, Marvin KirchhÃ¶fer and Maximilian Gotz finished twelfth overall, one lap ahead of class-runners-up Ahmad Al Harthy, Salih Yoluc, Jonny Adam and Euan Hankey with the Aston Martin. For Adam and Al Harty, the points scored at Spa were already enough to seal an early Blancpain GT Series Pro-Am drivers’ title and to rack up the title win for the Oman Racing Team with TF Sport as well. Third place in class went to the #961 Spirit of Race Ferrari with Alex Demerdjian, Nicolas Minassian, Davide Rizzo and Toni Vilander.

Am-Cup: Kessel Racing Ferrari throughout
A faultless performance by Swiss team Kessel Racing and its drivers Marco Zanuttini, Jacques Duyver, David Perel and Niki Cadei in the #888 Ferrari 488 GT3 was rewarded with a commanding class win, the team’s second Am class victory in a row in the Total 24 Hours of Spa. The team led in class almost from lights to flag and won with a margin of four laps from the #488 Rinaldi Racing Ferrari of Pierre Ehret, Rino Mastronardi, Patrick van Glabeke and Gabriele Lancieri. German team Walkenhorst Motorsport took the final podium slot with its #36 BMW driven by David Schiwietz, Stef Vancampenhoudt, Henry Walkenhorst and Ralf Oeverhaus.

National class honors for Speedlover Porsche
Only two Porsche cars were entered in the national class and once the #56 RMS Porsche had retired, it was only a matter for the drivers of the #991 Speedlover car to bring the Porsche home to collect the class honors. They did this in a masterful way and thus, Pierre Yves Paque, Gregory Paisse, Thierry de Latre du Bosqueau and Louis-Philippe Soenen were able to celebrate in front of their home crowd.

Markus Winkelhock (#25 Audi Sport Team Sainteloc, 1st): “Not only the first, the second victory as well is very important. I think everybody will agree that this one is the toughest 24-hour races there is, so if you can win it, it’s very nice. When we were two laps down with twelve hours to go, we thought: ‘Well, maybe we can still get into the top-5’. I never expected that we would get a chance to win this race. That shows you never should give up in life."

Maxime Soulet (#8 Bentley Team M-Sport Continental, 2nd): “I tried to catch the Audi at the beginning of my last stint, but when I realized I was not getting any closer, I stopped fighting. This second place still feels like a win, though. It was a very hard fight, we all agree that this was the toughest Spa we ever did. It’s a first podium for Bentley in Spa, I heard that everybody was crying when I crossed the line."

Michael Meadows (#90 AKKA ASP Mercedes-AMG, 3rd): “From about three hours to go we thought we might be short. It was then just a question of where we would come out again, whether it would third, fifth or second. To be honest, I am quite relieved that we finished on the podium, for it has been a tough race, as we saw with some of the other cars. Raffaelle did a fabulous job in his first 24 hours as well, doing four triple stints. That is quite impressive."

Oliver Morley (#16 Black Falcon Mercedes-AMG, 1st Pro-Am Cup): “The depth of talent throughout the whole field – in Pro, in Pro-Am, in Am – is just astounding. For me personally, it is a real privilege to be in the company of these guys – Le Mans winners, Spa overall winners, young and upcoming talents. I am very pleased that Mercedes-AMG, Black Falcon and my teammates have made it possible to fulfil a boyhood dream. I never thought this was possible, and certainly not on the top step."

Ahmad Al Harthy (#97 Oman Racing Team with TF Sport Aston Martin, 2017 Blancpain GT Series Endurance Cup Pro-Am champion): “Honestly, the team only told me when I crossed the line. This title is something that I have been dreaming about for a couple of years. I think this my fifth attempt at the Blancpain GT Series Endurance Cup. I am really proud of this title, sharing it with Jonny, and Euan and Salih played an important part in it as well."

David Perel (#888 Kessel Racing Ferrari, 1st Am Cup): “Three years ago, I was watching this race on YouTube! I never thought that I would be on the top step so shortly after trying to get into this race. We followed our plan and took no risks. Our car was amazing, we had no unscheduled pitstops, it was an amazing day for all of us.

Pierre-Yves Paque (#991 Speedlover Porsche, 1st Groupe National): “It was a perfect race, but we managed to avoid all pitfalls. We also have to thank André Van Hoof of Speedlover, who gave us a magnificent car. Without his great work, we would not have made it here."