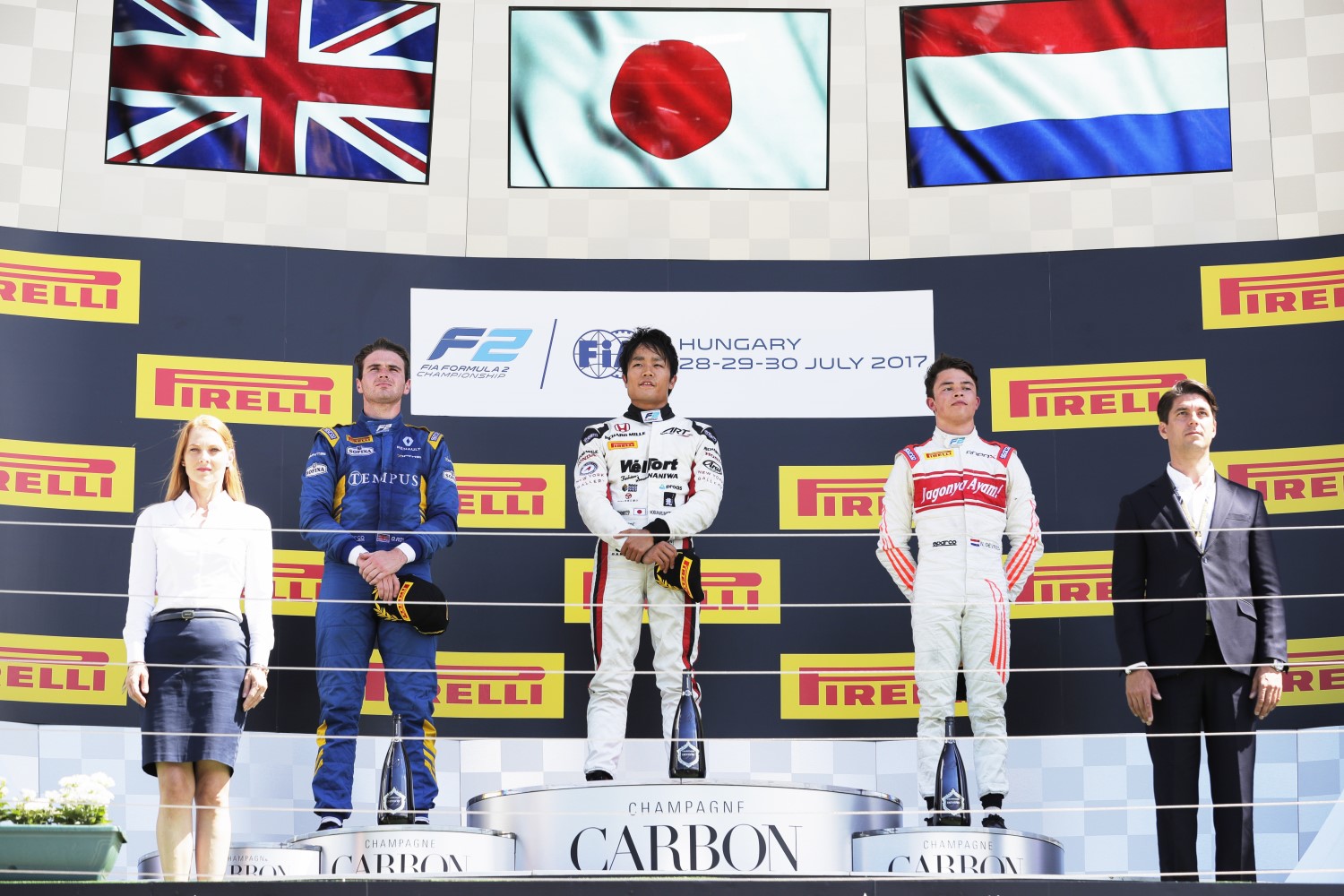 Nobuharu Matsushita has crushed his rivals with a stunning start before flying off into the distance to easily win this morning’s FIA Formula 2 sprint race at the Hungaroring, building a gap seemingly at will as he left the rest of the field behind to win by over 4 seconds from Oliver Rowland and Nyck De Vries.

The win was set up at the start, which took place under gloriously sunny conditions: teammate Alexander Albon made a good start from pole but Matsushita’s was incredible from P4, zipping past Norman Nato and grabbing the inside line to lead into turn 1, while Luca Ghiotto went outside Albon and De Vries ran inside, squeezing the Thai driver and handing a line past for title rivals Rowland and Charles Leclerc as they headed down the hill towards turn 2.

Matsushita simply built a lead over the rest of the field for lap after lap, with the others unable to make any headway on his pace. Further back a few squabbles resulted in place changes – Nicholas Latifi mugged Albon for P7 on lap 11, Artem Markelov squeezed inside Sean Gelael at turn 1 for P9 – but it was clear that, with the increasing temperatures, everyone was deeply into tire management mode for the end of the race.

It was lap 20 when the tire differences began to show: De Vries sliced inside Ghiotto at turn 2 when the Italian went slightly wide for P2, and when Rowland and Leclerc also mugged him in the tight middle sector it was clear he had a problem, but it was smaller than Robert Visoiu’s: the Romanian slid into Nabil Jeffri before spinning into retirement, prompting a VSC period to clean up behind him.

Just after the restart Jeffri was under pressure from Sergio Canamasas and ran wide over the large turn 4 curbs before slicing back onto the track and into the back of the Spaniard, spinning him into retirement and bringing the VSC boards out once again, picking up a 10s penalty for his efforts. Ghiotto continued his slow descent after the restart, with Nato and Latifi (who came together on lap 24, damaging the Canadian’s front wing) running past the Italian as the laps ticked down.

On the penultimate lap Rowland ran outside De Vries at turn 2 to grab the inside line for turn 3 to move up to P2, but the pair were unable to do anything about the superior pace of race winner Matsushita, who crossed the line to the applause of the paddock. Behind them Leclerc hung on despite a car problem and late pressure from Nato for 4th, with Latifi right behind them in P6, while Albon mugged Ghiotto late in the race for 7th position.

Pole, a win and a second saw Rowland close the gap in the drivers’ championship to Leclerc, who now leads on 208 points to 158, with Markelov holding on to P3 on 123 points ahead of Latifi on 115, Ghiotto on 95 and Matsushita on 91, while in the teams’ championship DAMS have pulled away from PREMA Racing by 273 points to 231, ahead of RUSSIAN TIME on 218 and ART Grand Prix on 165 as they head into the summer break before the next round at Spa-Francorchamps.