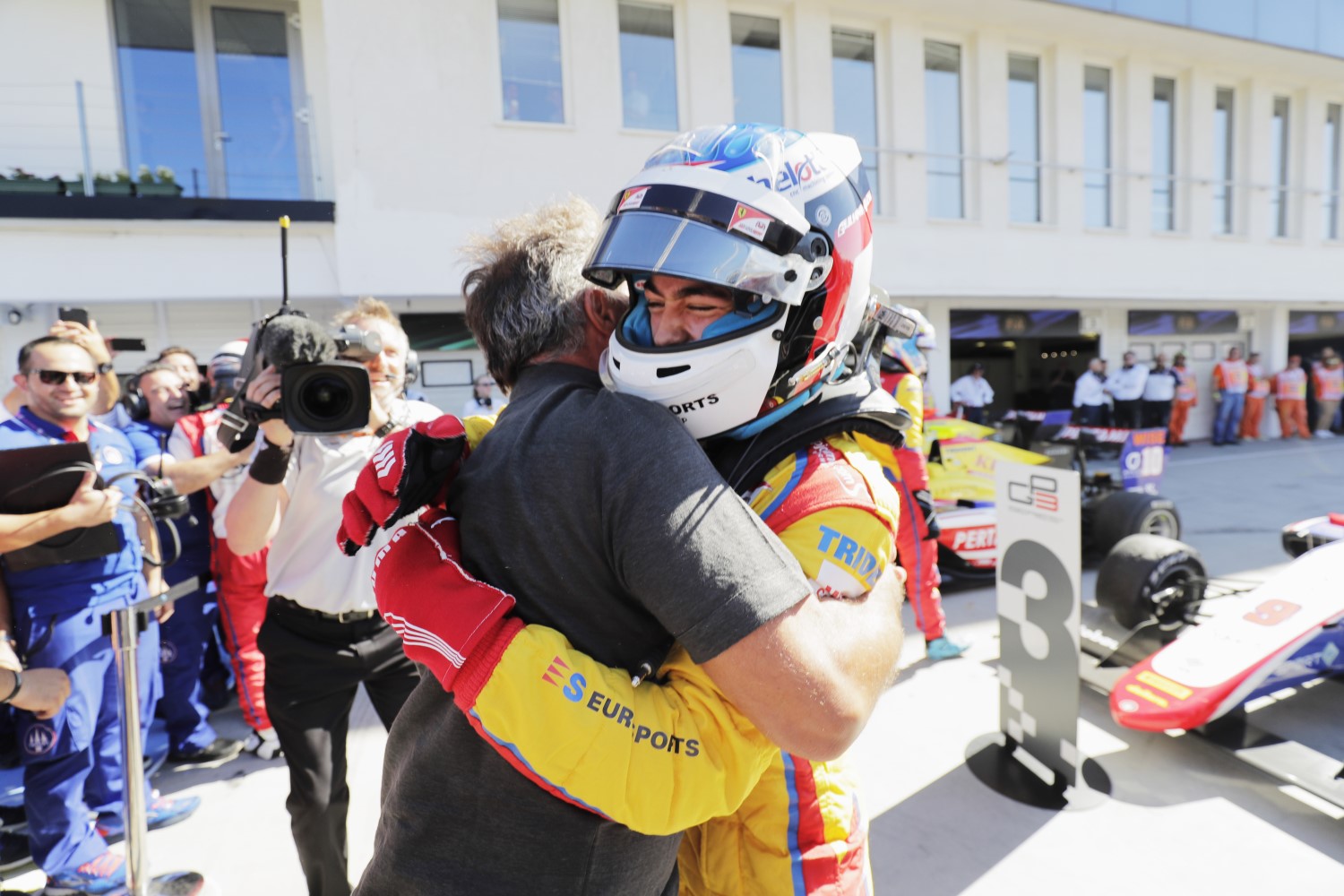 Giuliano Alesi has backed up his Silverstone Race 2 victory with a lights to flag win in this morning’s GP3 Series Race 2 at the Hungaroring, taking the lead at turn 1 and controlling the pace all the way to the flag to lead Trident’s first 1-2-3-4 ahead of Ryan Tveter, Kevin Joerg and Dorian Boccolacci.

The race got underway with gloriously sunny conditions, and when the lights went out polesitter Tveter made a good getaway and pushed across the track to cover teammate Jorg: unfortunately the American ran too deep at turn 1 to cover the Swiss driver, handing the inside line to Alesi who shot through and into the lead ahead of the pair and Boccolacci as they headed down to turn 2.

Further back Nirei Fukuzumi spun at turn 3 and Leonardo Pulcini ran deep at turn 4, forcing both men to return to the pits, but up ahead Alessio Lorandi was determined to ruin the Trident party and overtook Boccolacci at the final turn before tearing off after the leading trio. But the pace at the front was to prove too much for him: the Italian ran wide over the huge curbs at turn 11 on lap 7 before stopping with a puncture a few corners later.

Nevertheless the pressure remained on Boccolacci from behind as a train of drivers formed in his mirrors, only briefly delayed by a VSC to remove Bruno Baptista’s halted car from turn 6 two laps later, with George Russell capitalizing on a strong race to date and a sharp restart to mug Raoul Hyman for P9. The train started to lose carriages when yesterday’s winner Jack Aitken pushed through at turn 4 before jumping the curbs and coming back, only to also retire with a puncture on the next lap.

Another VSC period slowed the race on lap 14, the result of yet another puncture, this time for Julien Falchero, with Russell taking the opportunity to pit for fresh rubber. But with the laps running down Alesi controlled his pace to lead Tveter to the flag but just 0.6 seconds, with Joerg 2 seconds back for his first podium and Boccolacci a similar margin behind to round out the all Trident top 4. Anthoine Hubert was unable to spoil the party and finished in P5, just ahead of Niko Kari, with Hyman making up for yesterday’s disappointments with a strong race to 7th, just ahead of Campos teammate Marcos Siebert.

Despite the lack of points today Russell (92 points) maintained his lead in the drivers’ championship ahead of ART teammates Aitken (83), Hubert (78) and Fukuzumi (72), with Alesi’s win allowing him to sneak past Lorandi by 66 points to 63, while in the teams’ championship ART remains aloof from their rivals, leading Trident by 311 points to 152, with Jenzer in third on 99 points as they head into the summer break ahead of the next round at Spa-Francorchamps.