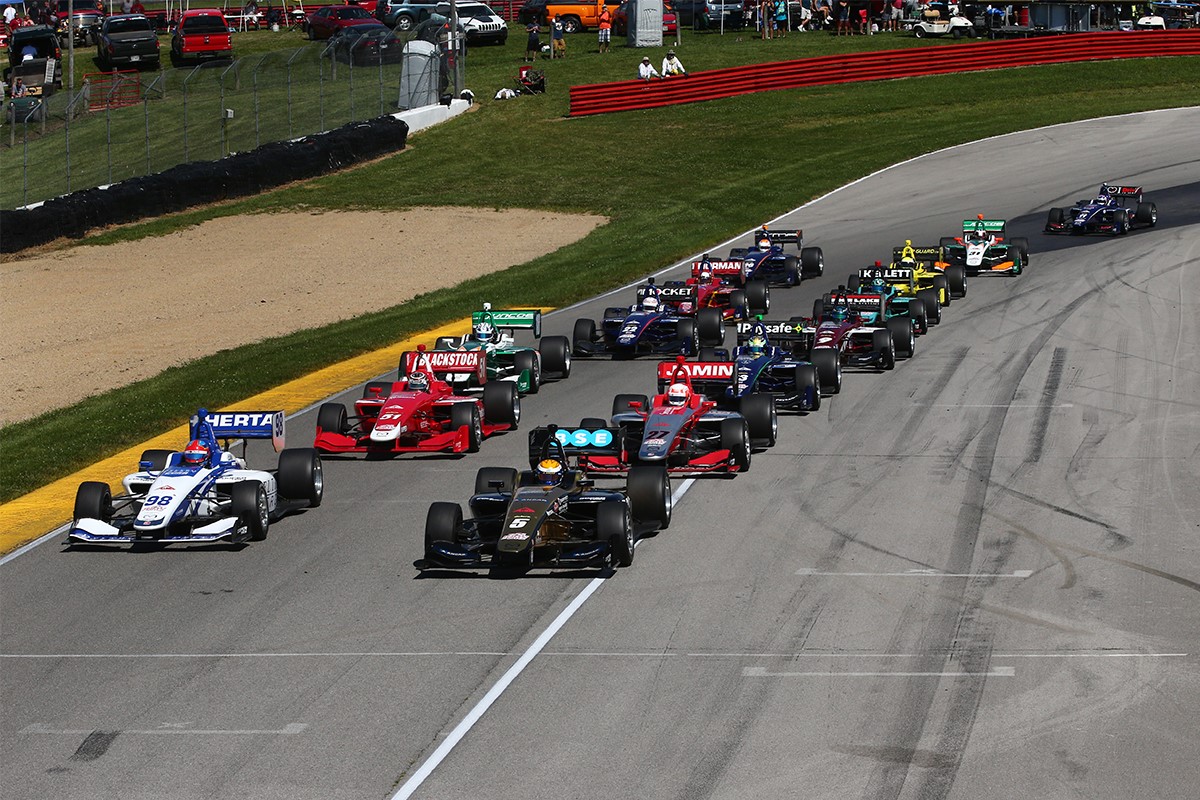 Santi Urrutia has clearly developed an affinity for the Mid-Ohio Sports Car Course. The Uruguayan today secured a hard-earned victory in the Cooper Tires Indy Lights Grand Prix of Mid-Ohio Powered by Mazda – his fourth in just five starts at the challenging 2.258-mile road course – and his first of the season for Belardi Auto Racing.

After winning on his debut at Mid-Ohio in 2015 en route to the Pro Mazda Championship Presented by Cooper Tires title, then winning both Indy Lights races – from the pole – last year, Urrutia, 20, from Miguelete, Uruguay, maintained his dominance by claiming the pole position during qualifying yesterday afternoon. And following two aborted attempts at a start, he took the green flag at the third time of asking by leaping ahead of Herta, who qualified alongside on the front row of the grid, and Jamin.

An intense first lap saw Jamin make a bold maneuver to overtake his teammate around the outside at Turn Two, only for Herta to reclaim the place four laps later with a similarly forceful pass at the end of the back straight heading into Turn Four.

The in-fighting allowed Urrutia to stretch out a lead of almost two seconds, but it didn’t last for long. After moving back into second place, Herta posted a series of fastest laps to whittle away the deficit, and by Lap 12 the two leaders were once again in nose-to-tail formation. Furthermore, they were also being tracked closely by Shelby Blackstock, enjoying his strongest race of the season so far for Belardi Auto Racing, and Carlin teammates Zachary Claman DeMelo and Neil Alberico.

The top five positions remained unchanged through the remainder of the 35-lap race, with Urrutia winning by less than half a second and all five cars separated by just 3.3116 seconds at the checkered flag.

Blackstock eventually claimed the extra championship point for posting the fastest lap of the race.

Alberico slipped back to a relatively lonely sixth but secured both the Staubli Award and the Tilton Hard Charger Award for making up two positions over his grid placing.

The two championship protagonists, Kyle Kaiser and Matheus Leist finished a distant 12th and 11th, respectively. Kaiser, from Santa Clara, Calif., who started sixth, slipped gradually backward due to oddly inconsistent handling on his Juncos Racing Dallara-Mazda IL-15, while Leist simply struggled in his Carlin entry on his first-ever visit to Mid-Ohio.

Both drivers will have an opportunity to make amends during tomorrow’s 14th round of the 16-race season, which will see the green flag at 1:20 p.m. EDT, directly before the Verizon IndyCar Series headline event. Herta, who secured the additional championship point during qualifying earlier today, has now slipped ahead of Leist in the driver’s standings. He now trails Kaiser by 48 points, 288-240, with Leist just two markers behind on 238.

Santi Urrutia (#5 Belardi Auto Racing w/SPM): “It’s good to be back at the top, especially for the Belardi team that has been working so hard. I got the win and Shelby took quickest lap, which shows that we’re doing great work together as a team. We have been struggling this year and the team really deserves this. I really like Mid-Ohio. I won both races here last year and one Pro Mazda race two years ago. This helps in the championship – Kaiser was off today, we just need him to be off for the next couple of races. The series is so competitive, any mistake costs you a lot."

Colton Herta (#98 Deltro Energy Mazda/Andretti-Steinbrenner Racing): “I had a little bit of understeer and that was amplified when I got near Santi. I had one good crack at him (but) he drove a good race. I was out of push-to-pass by lap 12. I wasn’t getting super-close to him and he made a mistake, so I used three on one lap to get alongside him. But it took a couple of laps to lay down Cooper rubber and have the track come to us. Once it did, I was on rails. I caught Nico and went after Santi. I was really close to him at the end. But I’m still learning all the tracks in this car. The tracks are so different in this car than they were in the USF2000 car."