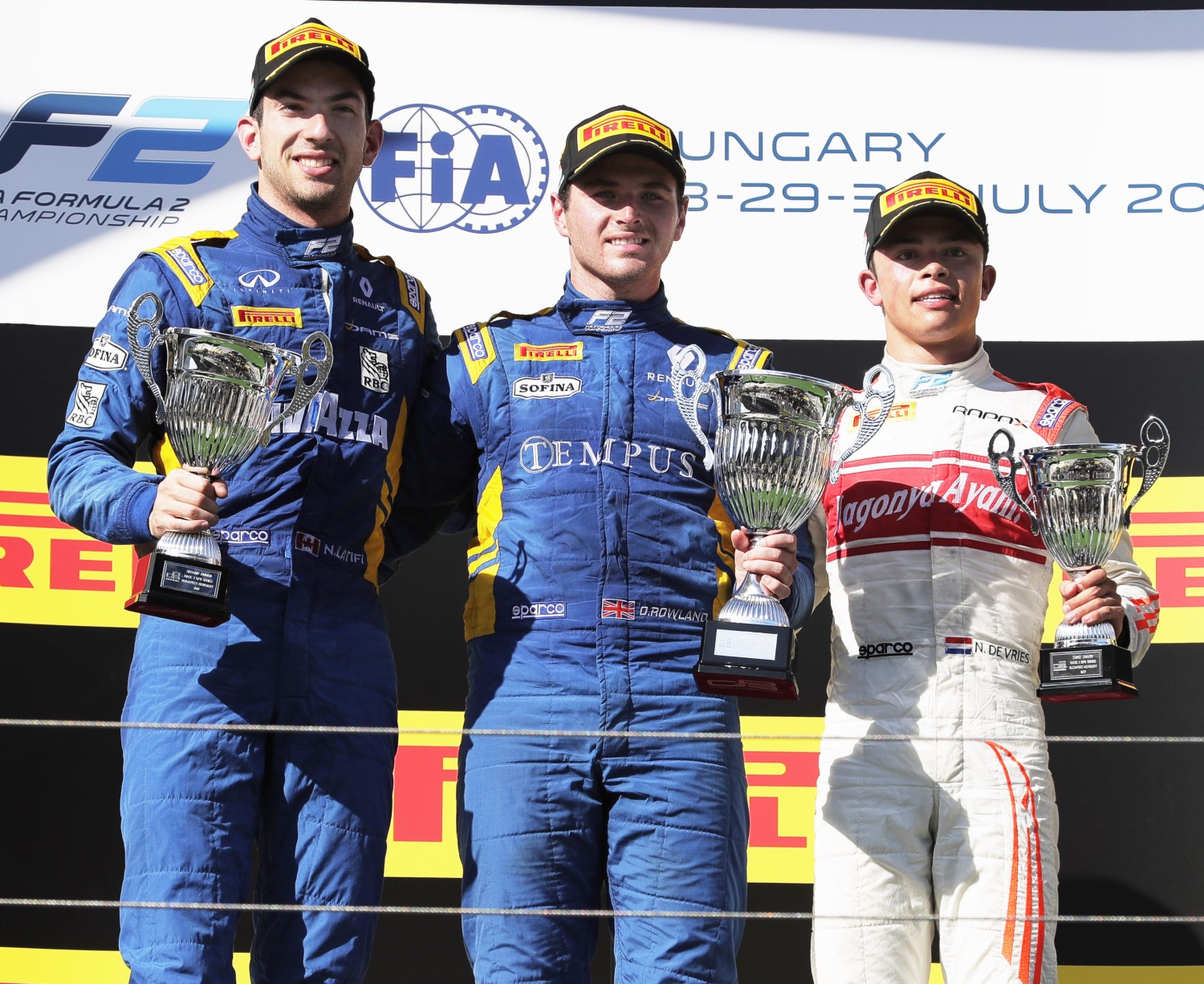 Oliver Rowland has brought home exactly the result he was looking for after emerging on top of a chaotic FIA Formula 2 feature race at the Hungaroring, holding on from pole despite losing the lead early on and surviving a late attack from Artem Markelov to claim victory ahead of DAMS teammate Nicholas Latifi and Nyck De Vries.

Anyone who was expecting a quiet race around the tight, technical circuit was soon proven wrong: track temperatures of 52Ëš were soon matched by the heat of battle on it when Rowland made a good start but Markelov made a better one, with the Russian leading the Briton with his countryman Jordan King and Latifi into turn 1, while further back championship leader Charles Leclerc was up to P12 from the back and looking for more on the alternate tire strategy.

King was the first of the front runners to start losing his tires, with Latifi easing by him on lap 8 just before the first stops started to come: King stopped 2 laps later with Rowland pitting on lap 11 and Markelov coming in to cover it next time through but emerging a few seconds behind the Briton. Meanwhile Alexander Albon was the first of the medium shod drivers, but Leclerc was determined to change that: the Monegasque pushed around the outside at turn 4 but got airborne over the new curbs before biding his time to attack once more.

Eventually the better car shone through: Albon braked a little early into turn 1 with Leclerc easily claiming his scalp at the next corner for the lead on lap 15, but the real fight looked to be over as Rowland led the pitted drivers and was only 10 seconds (and shrinking) back down the road and was claiming scalps, passing Sergio Sette Camara, Louis Deletraz and Albon with ease over the following laps before reclaiming the lead from Leclerc as the Monegasque stopped for fresh tires on lap 23.

Leclerc re-emerged in P11, which became P9 shortly afterwards as Robert Visoiu and Sergio Canamasas proved two can’t become one at the first corner, prompting a safety car to clean up the mess and bunching up the field as it did so. The race was live again on lap 27 with Leclerc on a charge, using his new tires to blast past Luca Ghiotto, King and Gustav Malja at turn 1, with the Briton running over the turn 4 curbs and clattering into Ralph Boschung, picking up a 10 second penalty as a result.

Markelov had been protecting his tires and was clearly the fastest man at the front of the race and tried to run inside Rowland on the front straight, but with the gap shrinking the Russian ran across the grass, over the curbs and into the wall on the outside of turn 1, with Latifi also attacking his teammate and being forced wide at turn 2 just before the safety car’s re-emergence was announced, bringing proceedings to an end.

The safety car wheeled in on the last lap to allow Rowland to roll across the line for victory ahead of teammate Latifi and De Vries, who stayed out of trouble and quietly moved forward all race long, with Leclerc finishing P4 from 19th on the grid ahead of Nobuharu Matsushita, Luca Ghiotto, Norman Nato up to P7 after stopping ahead of everyone, Albon, an impressive P9 for Sean Gelael from last on the grid, and Santino Ferrucci, who picked up the final point on debut.