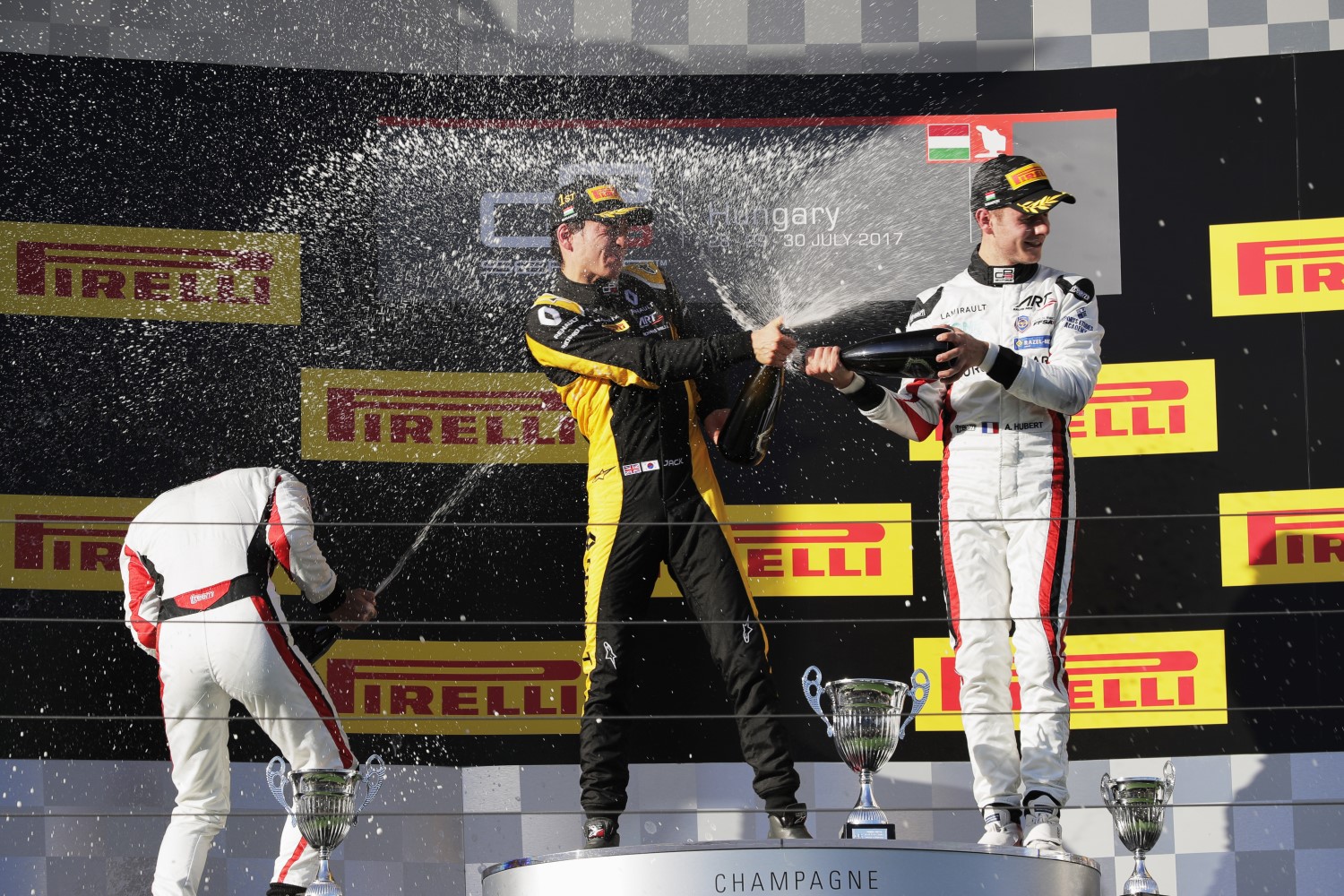 Jack Aitken has taken his first win of the season and given his championship challenge a boost with a crushing display of speed and maturity this afternoon in the GP3 Series Race 1 at the Hungaroring, easily controlling his pace as well as his rivals for a relatively simple victory ahead of ART teammates Nirei Fukuzumi and Anthoine Hubert.

The win was set up before the start when Series leader and front row starter George Russell pulled off the circuit on the installation lap after suffering from mechanical gremlins, and when the lights went out Aitken easily led Fukuzumi across the track to cover Dorian Boccolacci before heading into turn 1: the Japanese driver was all over his rear wing but the Briton defended well until a safety car slowed them down, emerging to remove Arjun Maini and Tatiana Calderon’s cars after they stopped separately further back off the track.

Aitken easily controlled the restart which saw Hubert trying in vain to get a jump on Boccolacci, but at the end of the lap Steijn Schothorst also stopped on the circuit, prompting a brief VSC period to deal with the Dutchman’s car before going live again on the same lap: Fukuzumi had a better restart but Aitken had sufficient buffer to deny him his position, although behind them Alessio Lorandi was unable to keep Kevin Jorg behind him, losing P7 in the process before gaining it back next time around when the Swiss driver went too deep at turn 1.

Up at the front Aitken was in a race of his own, setting a string of fastest laps to build a substantial gap back to his teammate, who was soon joined by Hubert: the Frenchman was all over the back of Boccolacci on lap 9 into turn 1, ran side by side with him through turn 2 and claimed P3 at turn 3 before heading off after his teammates, with Niko Kari trying desperately to follow him but just touching wheels with Boccolacci before losing places at turn 1 next time round as he ran deep after trying to pass on the outside of the corner.

And at the flag it was Aitken who eased to victory by more than 4 seconds over Fukuzumi, with Hubert a similar gap behind in P3 but well ahead of Lorandi, who stole 4th from Boccolacci on the penultimate lap. Giuliano Alesi held off his Trident teammates Jorg and Ryan Tveter at the flag, and a disappointed Kari just held off a charging Bruno Baptista for P9.