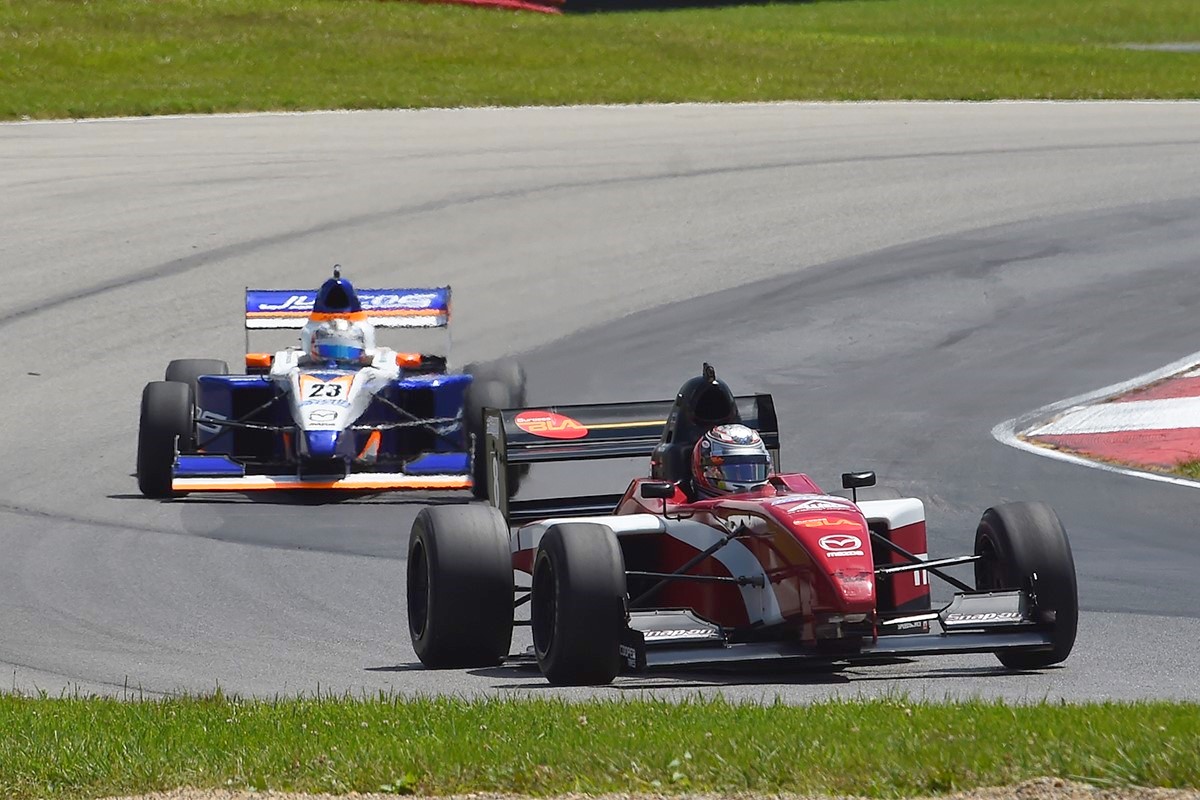 Round Eight (out of 12) of the hotly contested Pro Mazda Championship Presented by Cooper Tires once again boiled down to a tense battle between Victor Franzoni (Juncos Racing) and Anthony Martin (Cape Motorsports). Just as was the case yesterday, the Brazilian and the Australian were never separated by more than a few car lengths. Only this time, after taking his fourth pole of the season and holding a narrow advantage for the majority of the 35-minute Pro Mazda Grand Prix of Mid-Ohio Presented by Allied Building Products, Martin was unfortunate enough to run afoul of a lapped car with just a few minutes to go, gifting an opportunity for Franzoni to sneak past and secure his fourth win of the season.

Another Brazilian, Carlos Cunha, took advantage of another clash with lapped traffic on the last lap to pass Team Pelfrey teammate Nikita Lastochkin for the final place on the podium.

After edging his rival to the pole in qualifying this morning by almost three tenths of a second, Martin, from Perth, Australia, duly accelerated into the lead at the start. Martin maintained his lead for almost 23 laps around the undulating 2.258-mile Mid-Ohio Sports Car Course, while Franzoni ducked and dived in his mirrors, anxiously looking for a way past.

Just when it looked as though Martin would snag his fifth win – his third in succession and twice in as many days – the two leaders encountered the second Juncos Racing entry of Jeff Green, from Peoria, Ill., who for most of the race had been trying to fend off the advances of Pittsburgh, Pa., native Kris Wright (JDC MotorSports). Faced with a much slower car in front of him at the entry to the tricky, off-camber Carousel turn, Martin was forced to try to make a pass around the outside line. Unfortunately, at the same moment, Green drifted wide into his path. Martin was forced to take evasive action which allowed Franzoni to sneak past on the inside and take over the lead.

Green then spun causing a full-course caution which left just enough time for a one-lap dash to the finish line. Franzoni made no mistakes as he held on to win by less than a half-second from an aggrieved Martin, who took small consolation from claiming the additional championship points for posting the fastest lap of the race and leading most laps.

Los Angeles-based Russian Lastochkin snatched third place from teammate Cunha on the opening lap and held it until Turn Two on the final lap when his attempt to pass the lapped World Speed Motorsports entry of Bobby Eberle ended with contact and allowed Cunha to take the place. TJ Fischer, from Los Angeles, Calif., also profited from the incident to finish fourth ahead of an unhappy Lastochkin and Sting Ray Robb (World Speed Motorsports), from Payette, Idaho, who garnered the Staubli Award after recovering well from a first-lap incident which had dropped him to the back of the field.

Kaminsky’s fourth National Class win of the season vaulted him into the points lead ahead of Brendan Puderbach, from Bronx, N.Y., who finished 12th for FatBoy Racing!

Victor Franzoni (#23 Juncos Racing): “I had a better car and I was faster in the middle of the race but it was another day that I was just stuck and I couldn’t do anything. I had some good luck, which is what we need to win the championship. But to have the luck, you have to be in position so I’m really happy we did what we had to do. I was a little bit behind what happened. I saw Jeff (Green) moving so I’m not sure if he had a brake problem or what. I saw him go outside but I went inside, so I couldn’t see what was happening. I am starting second tomorrow so we’ll try to do the same – if I have the chance to pass, I will."

Anthony Martin (#8 Mazda/Burgess BLA-Cape Motorsports): “Victor was right on my tail the entire race. I tried to be conservative with the tires so I found a lap time that I was comfortable doing and tried to stick with that. I knew that he wouldn’t be able to pass at those lap times. I looked in the mirrors to see where he was struggling versus where I was strong and tried to capitalize in those spots as much as I could. The race went well – I can’t thank Mazda and Cooper Tires enough, they give us everything we need to go out there and race, and the Cape guys gave me a great car as always. To set the fast time is always a good achievement. As far as what happened at the end of the race, getting put out by Victor’s teammate was not the way I wanted it to happen. It’s bad when lapped cars affect a championship."