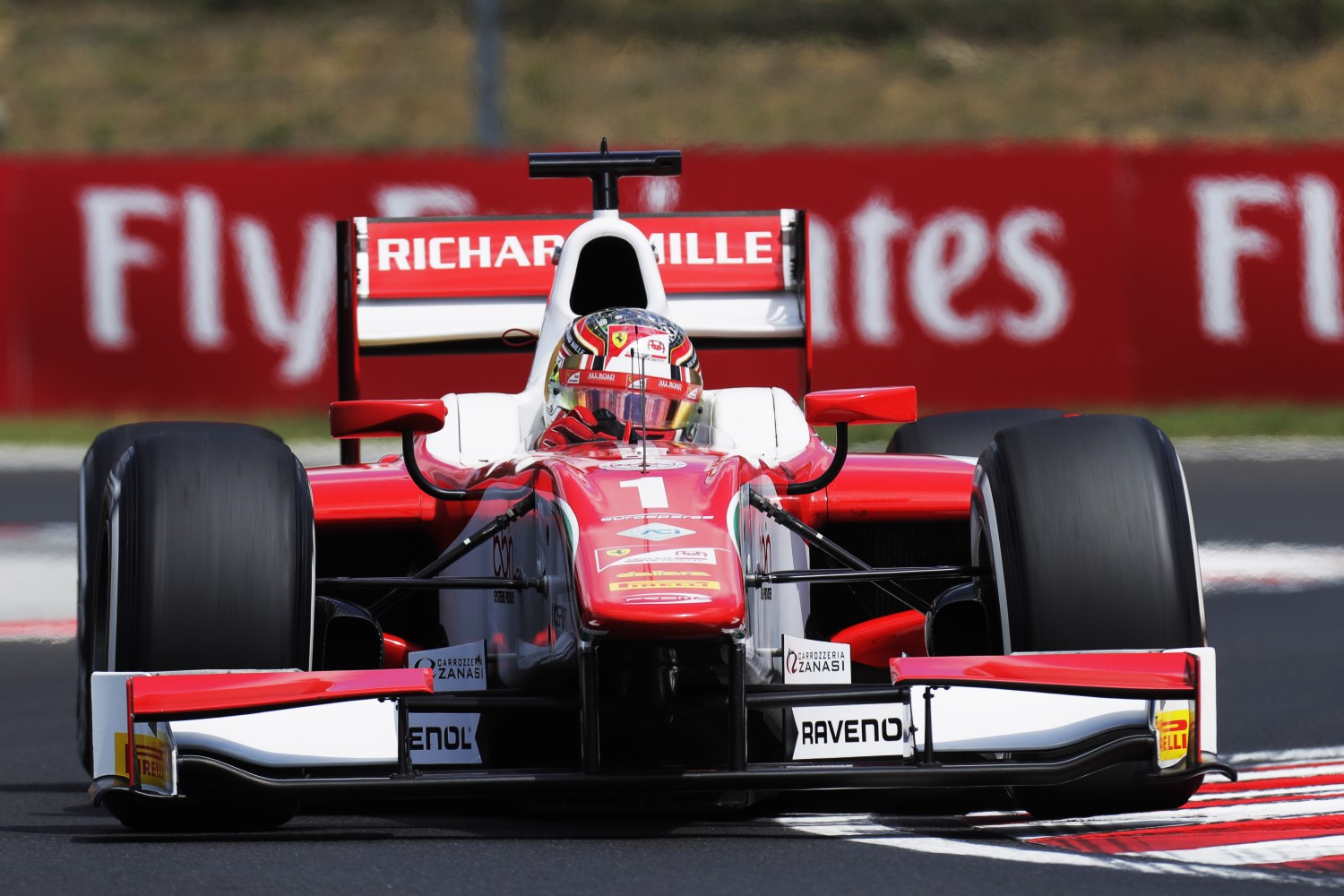 UPDATE Formula 2 title leader Charles Leclerc has been excluded from the results of qualifying at the Hungaroring, elevating Oliver Rowland into pole position for the Feature Race.

Leclerc controlled qualifying for the seventh successive event, claiming pole over Rowland by a margin of almost half a second, but his Prema-run machine failed post-session checks.

A statement confirmed that Leclec's car "used shims in the differential which did not comply with the material requirements laid out in the Dallara User Manual.

"As such the race stewards had no choice but to disqualify the Ferrari Academy driver from the results of qualifying for a breach of Article 9.2 of the FIA Formula 2 Technical Regulations.

"A Prema Racing representative confirmed that additional shims will comply with the material requirements."

Leclerc has been granted permission to start the race, though must do so from the rear of the 20-car field.

Rowland will thus start from pole position, with Artem Markelov alongside on the front row of the grid.

Rowland will also receive the four bonus points for pole, meaning he draws level with Markelov in the championship standings.

07/28/17 Charles Leclerc has continued his untouchable run in qualifying by grabbing an ever-increasing record of seven poles in a row this afternoon in Budapest, defying his earlier comments that the Hungaroring was not a track that suited him to annex the top spot by almost half a second from Oliver Rowland and Artem Markelov.

The Monegasque driver stopped the clocks at 1:26.268 halfway through a hot and sunny session despite a red flag on his fast lap briefly slowing him, with his rivals unable to do anything about the gap on their second set of tires as Leclerc continued his run, claiming every pole of the season so far.

All of the grid were straight out on track when the lights went green except Alexander Albon, Pertamina Arden teammates Norman Nato and Sean Gelael, and the championship leader: Rowland led the early running despite a messy first flyer, with the final 4 drivers finally emerging just as their rivals had finished their fast laps and were starting to return to the pits, with Markelov and Antonio Fuoco grabbing P2 and 3 on their final tours.

The last 4 drivers timed their run to hit a first flying lap as the rest of their rivals returned to the pits to ensure a clear run, but unfortunately for them all Gelael spun to a stop in the mid-section of the circuit, prompting the red flags to emerge and killing off Leclerc, Albon and Nato’s fast laps. The track remained closed for just 3 minutes, and the trio were straight back out on track to make up for lost time, with Nato at the front of the queue.

Leclerc, at the back of the trio, had the luxury to make some space ahead of himself for his fast lap, and it paid off in spades: he topped the 2nd and 3rd sector times to easily claim P1 before they all returned for fresh rubber as their rivals re-emerged. The three drivers had a quick tire stop before returning again, with Leclerc the last man out as the clock wound down, but they needn’t have bothered: no one could get closed to the Ferrari Academy driver, and he had the luxury of returning without the need to set a better time.

Behind the top 3 Jordan King, Fuoco, Nato, Nicholas Latifi, Nyck De Vries, Nobuharu Matsushita and Sergio Canamasas rounded out the top 10, with debutant Santino Ferrucci impressively grabbing P11 well within a second of pole, all of whom will be hoping their race pace can make a dent in the Leclerc’s plans for tomorrow’s feature race.