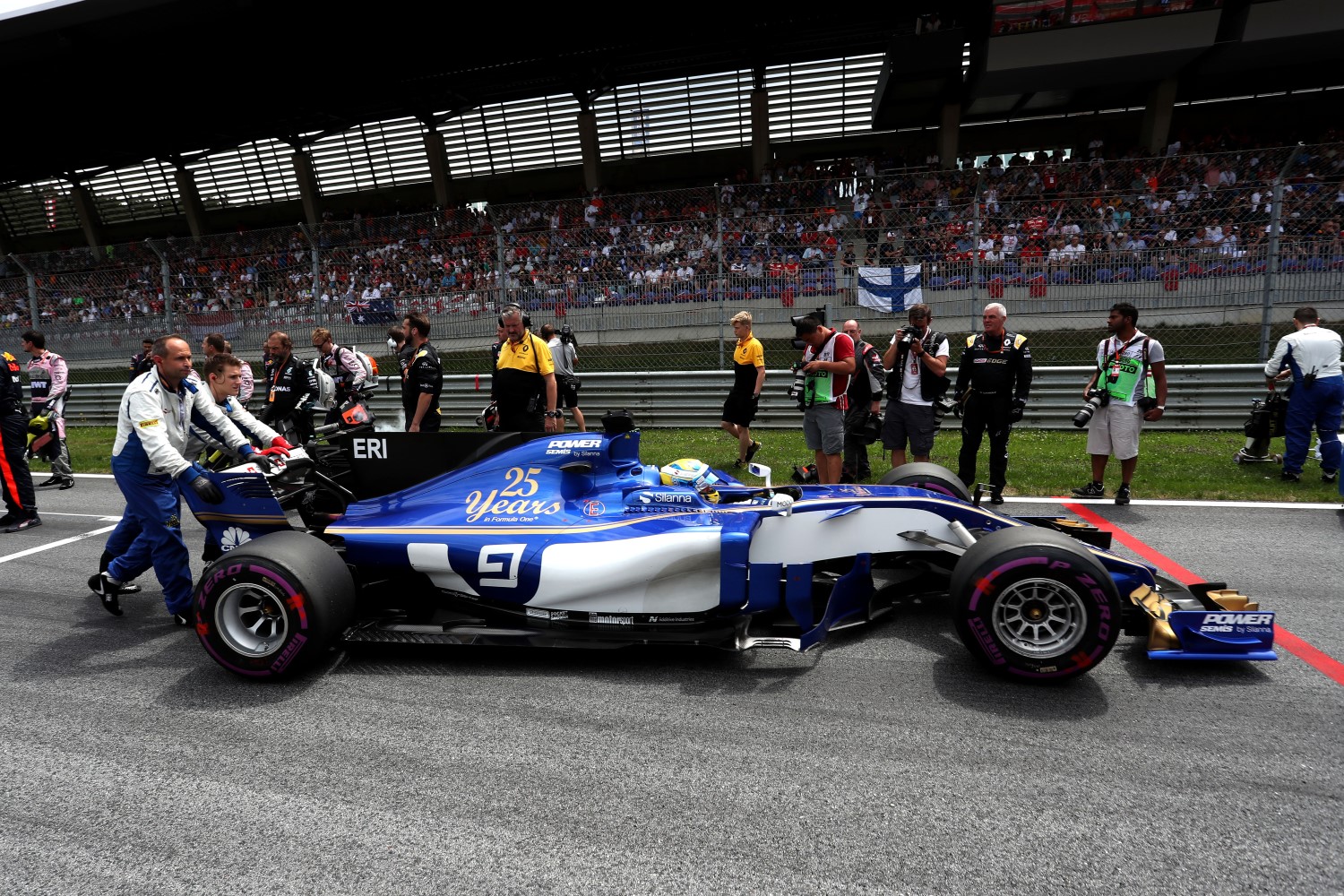 (GMM) Sauber looks set to stick with Ferrari power for 2018.

Following a period of speculation, the Swiss team's new boss Frederic Vasseur confirmed in Hungary that he has called off the planned customer engine deal with Honda.

"He has some really good ideas about how to structure the team for the future," said driver Marcus Ericsson, who is closely linked with Sauber's owners.

In a statement, Vasseur said the 2018 Honda deal has been called off for "strategic reasons".

"We came to the point where it was better for both sides to end the negotiations," the Frenchman later told reporters. "We did it very honestly and with respect to Honda."

And Honda's Masashi Yamamoto told Blick newspaper: "We wanted to be with Sauber in 2018, but after discussions with management, we agreed to end the project because of different views of the future."

Currently, Sauber is struggling for performance with the year-old customer Ferrari engine.

Staying with Ferrari in 2018 would be the simplest solution for Sauber, especially as Mercedes and Renault already have several customers apiece.

"Yes, there are FIA regulations but it's still our task to choose our supplier of engines. Don't worry, this will be done soon," Vasseur said.

As for why Honda is out of the running, he explained: "We have a very difficult situation in terms of performance, and we do not know what will happen with Honda's contract with McLaren, which also complicates our situation."

Vasseur said a decision this weekend is possible.

It is believed the talks with Ferrari are about upgrading the customer deal so that Sauber receives the 2018 engine next year.

"This season has been difficult for the team and having last year's engine makes it more difficult," Vasseur admitted.

"When you start a season with last year's engine, it's very difficult to motivate everyone."

(GMM) Daniil Kvyat thinks it's possible Red Bull will make a decision about his future this weekend.

Motor racing bosses of the energy drink company admitted recently that while Carlo Sainz is staying put for 2018, Russian Kvyat might also be kept at Toro Rosso.

"Honestly, we're not far from the point where we learn all about 2018," Kvyat admitted in Hungary.

"If it happens before the summer break that's good, but if it's longer, I also do not worry.

"Yes, there is a date in my contract by which the management must make a decision about the extension, but I also have good relations with Red Bull and they always try to inform me of the decision as soon as possible.

"As long as I'm in standby mode I can only wait, but I still believe in the team, I want to be part of the project, I'm still very young so I have time. I do not see any reason why I want to leave," Kvyat said.

End is nigh for LMP1 and DTM – Massa

(GMM) While F1 and Formula E keep growing and thriving, the end could be nigh for motor racing's other top categories Le Mans and DTM.

That is the view of formula one veteran Felipe Massa.

This week, the latter two series were rocked by the news that Mercedes is quitting the German touring car category DTM, while Porsche is pulling out of the top world endurance championship echelon LMP1.

Porsche is tipped to either join Mercedes at Formula E, or even move into F1 as an engine supplier.

"Now with Mercedes I think DTM could also be at an end. I can't see only two manufacturers racing together," the Brazilian added in Hungary.

At the same time, Massa – who has already tested for Jaguar's Formula E team – thinks the all-electric series is constantly gaining in strength.

"I see an important future for formula E," said the Williams driver.

"And formula one is growing and will continue to grow, especially if we have more manufacturers with the new engine rules," Massa added.

Palmer says Kubica no threat for 2017

(GMM) Jolyon Palmer says he is keeping his Renault seat for the rest of 2017.

Former F1 star Robert Kubica is in Hungary this weekend, where after the race he will test Renault's 2017 car at the circuit near Budapest.

It has raised speculation to fever-pitch that Renault intends to dump struggling Briton Palmer during the summer break.

But Renault boss Cyril Abiteboul has been quoted as saying that Palmer will in fact be racing at Spa in August.

"It is not foreseen that there will be a change in our position in the short term," he is quoted by the German broadcaster RTL.

"And even if the test for Robert goes well, it does not mean we automatically choose him for 2018," Abiteboul added.

And Palmer said in Hungary that Abiteboul has also assured him personally that his seat is safe for now.

"My boss has told me they're not planning on putting Kubica in the car," he said.

"He (Abiteboul) called me to tell me Robert is testing, which is fine. I can understand why. I lose a (test) day but I get a longer holiday and I come back refreshed for Spa," Palmer added.

(GMM) F1's governing body has played down the waves of negativity following its decision to impose the controversial 'Halo' concept in 2018.

Not only fans, but also teams and many drivers have admitted their opposition to the questionable aesthetics of the concept designed to improve forward cockpit protection.

"If it looks sh-t, it is sh-t," Kevin Magnussen said in Hungary.

Even Grand Prix Drivers' Association director Romain Grosjean admitted he is opposed, saying he struggles to see through the Halo when driving.

The French driver's boss Gunther Steiner reacted: "We'll have to put it on the simulator so he can get used to it.

"We need to find a solution because it (Halo) is coming."

As for the worries about Halo's aesthetics, FIA officials are trying to calm the waters.

Safety director Laurent Mekies, for one, said a better solution than Halo might eventually be debuted post-2018.

"It's possible that we'll make some milestones and decide that another solution will be better, also aesthetically," he said.

And F1 race director Charlie Whiting said the FIA is working to refine the design, while allowing the teams to come up with their own styling to accompany the basic Halo that will be supplied by an external manufacturer.

"They will come up with some pretty different designs," he predicted.

"All the prototypes have been pretty raw, so they (the teams) have some freedom to improve the aerodynamic efficiency.

"Last year when Williams painted their prototype white, it already looked much better," Whiting continued. "Personally, I think the fans will quickly get used to it.

"In the end I think everything will not be as bad as it might seem now."

However, there is also an issue of weight, with the cars to increase by at least 5kg to accommodate Halo and Lewis Hamilton pointing out that "Even now the cars are not exactly light".

Recent reports suggested the bulk of the Grove team's resources are now shifting towards next year's project, with teenage rookie Stroll expected to stay at Williams.

"Calm down — let's go step by step," the Canadian laughed in Hungary.

"At the moment I am focused on this championship and on my development.

"It is true that there are a group of fantastic people who have arrived at our team, such as Paddy (Lowe) and they're already working on the 2018 project," Stroll admitted.

"I believe we have a very strong group capable of producing a very competitive car."

Williams is currently fifth in the world championship, 54 points behind Force India.

Sauber F1 renews with Ferrari, will get latest engine

The Sauber F1 Team is pleased to announce that a multi-year agreement with Scuderia Ferrari has been signed. The longtime collaboration with Ferrari as the engine supplier will continue with the latest power unit specification as of 2018. This cooperation, which was initially started back in 1997, has allowed the Sauber F1 Team and Ferrari to enjoy a productive collaboration for a total of 17 years.

Frederic Vasseur, Team Principal, Sauber F1 Team:
“I am very pleased to confirm that we will continue to work with Scuderia Ferrari as our engine supplier in form of a multi-year agreement. The shared experience between the Sauber F1 Team and Ferrari has built a strong foundation, which will allow us to move forward swiftly and efficiently, also in terms of the development of the 2018 car. I am convinced that together we can achieve the results which reflect the passion and determination that is, and always has been, behind the Sauber F1 Team."

Gasly, a long-term member of Red Bull's junior program, has taken part in several Formula 1 tests with Red Bull and Toro Rosso, and sampled the RB13 earlier in the year in Bahrain.

Gasly will test for Red Bull on Wednesday, with regular racer Max Verstappen in the car on Tuesday.