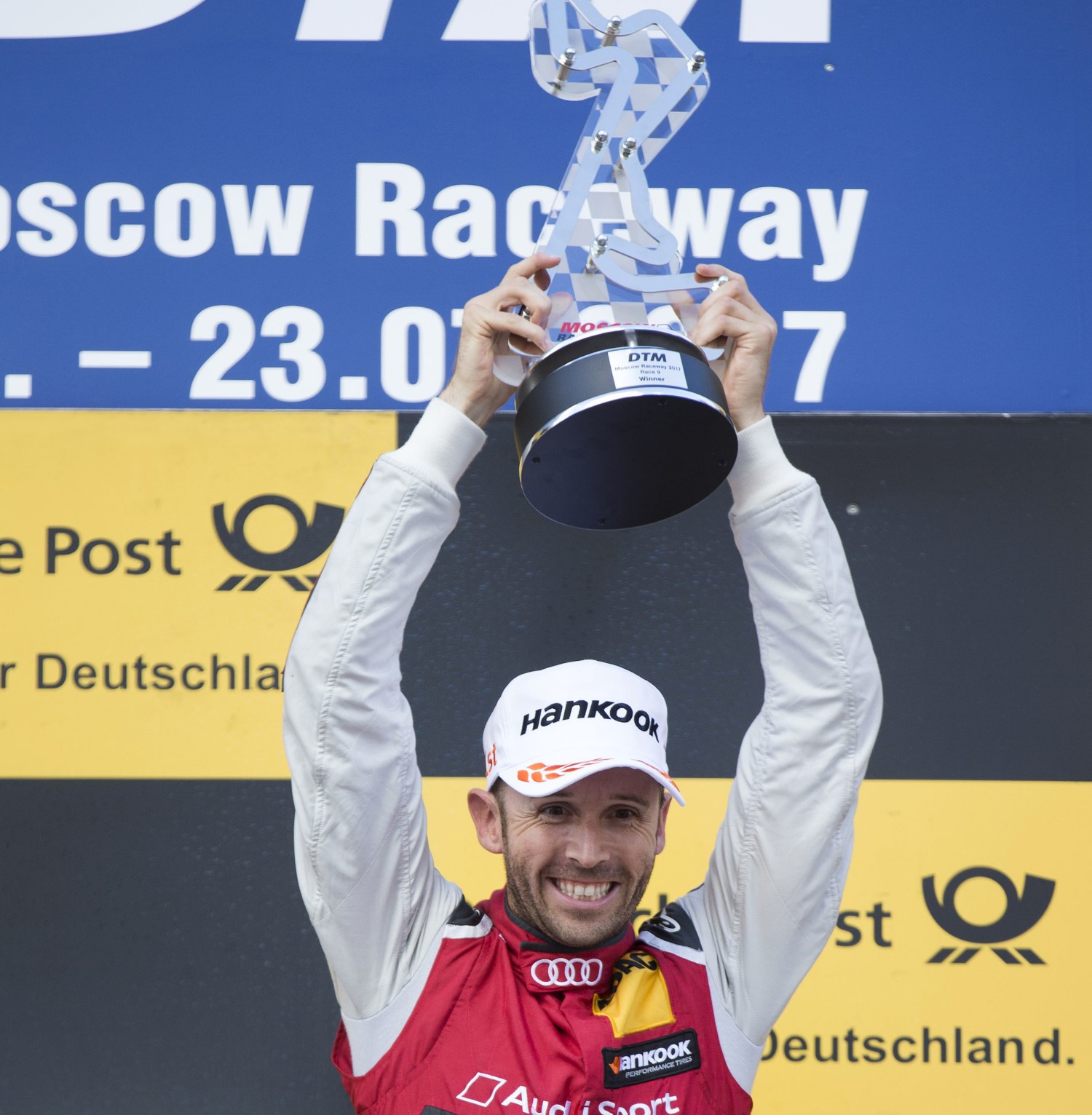 A rookie has sensationally become the DTM’s 'mid-point champion.' With a lights-to-flag victory Audi driver Rene Rast recaptured the lead of the standings in the first of the two DTM races at Moscow Raceway in Russia. In spite of a broken foot, Mike Rockenfeller perfected an Audi one-two win.

Rene Rast continues to cause a sensation in his first DTM season. In spite of never having been to Russia before and knowing Moscow Raceway near Moscow only from the simulator, the driver from Audi Sport Team Rosberg secured pole position on Saturday and went on to clinch one of the rare lights-to-flag victories in the DTM. With that, the German, after nine of 18 races, is leading the standings by a narrow margin, trailed by Lucas Auer (Mercedes-Benz) and Mattias Ekstrom (Audi).

“It was an awesome race," said Rast, following his second DTM victory. “The car was mega, the pit stop superb – a big thank you to the team! Being in the top spot of the championship again is a tremendous feeling."

No less impressive was the second place clinched by Mike Rockenfeller who, following his accident at the Norisring in which he was not at fault, raced with a broken left foot, having to use his right one for braking at Moscow Raceway. “This isn’t so easy in the DTM," said the campaigner from Audi Sport Team Phoenix who had started the race from position two on the grid and went on to follow Rene Rast on 38 laps like a shadow. In the early stage, “Rocky" countered an attack by BMW driver Augusto Farfus and on clinching second place maintained his chances of winning the title. “For my mechanics and me, today is a great day. They worked so hard to put the car together again after the Norisring and I think that there weren’t a lot of people expecting us to manage this here. That makes me all the prouder of my team."

Head of Audi Motorsport Dieter Gass could only agree with that. “A superb one-two victory for Audi! Rene (Rast) showed a fantastic performance from A to Z: pole position and a lights-to-flag win. And that Mike (Rockenfeller) with a broken foot finished in position two battling against the best drivers in the world’s best touring car series is really impressive."

For the other Audi drivers, Saturday did not go so well. Mattias Ekstrom (Audi Sport Team Abt Sportsline), who had started as the leader of the standings, dropped far behind as early as on the starting lap after being bumped by BMW driver Timo Glock and subsequently lost additional positions in a duel with Lucas Auer. The Swede still managed to advance to position eight and on the finish line even came close to intercepting Gary Paffett (Mercedes-Benz) in another photo finish.

Jamie Green, as well, was hit hard by a rival on the starting lap and drove his damaged Audi RS 5 DTM home in position nine. Nico Muller crossed the finish line in tenth place, but due to a jump start, retroactively received a five-second penalty. Loic Duval, on taking position ten, showed a good qualifying performance but, having received a third warning in total this season, was handed a grid penalty putting him on position 15. In spite of this, the Frenchman just barely missed out on scoring his first point in the DTM.

After the first half of the season, Audi, with a 69-point advantage over Mercedes-Benz, is leading the manufacturer’s standings, Audi Sport Team Rosberg has maintained position one in the teams’ standings. Race two at Moscow Raceway on Sunday starting at 1:45 PM CEST marks the beginning of the second half of an exceedingly thrilling DTM season.