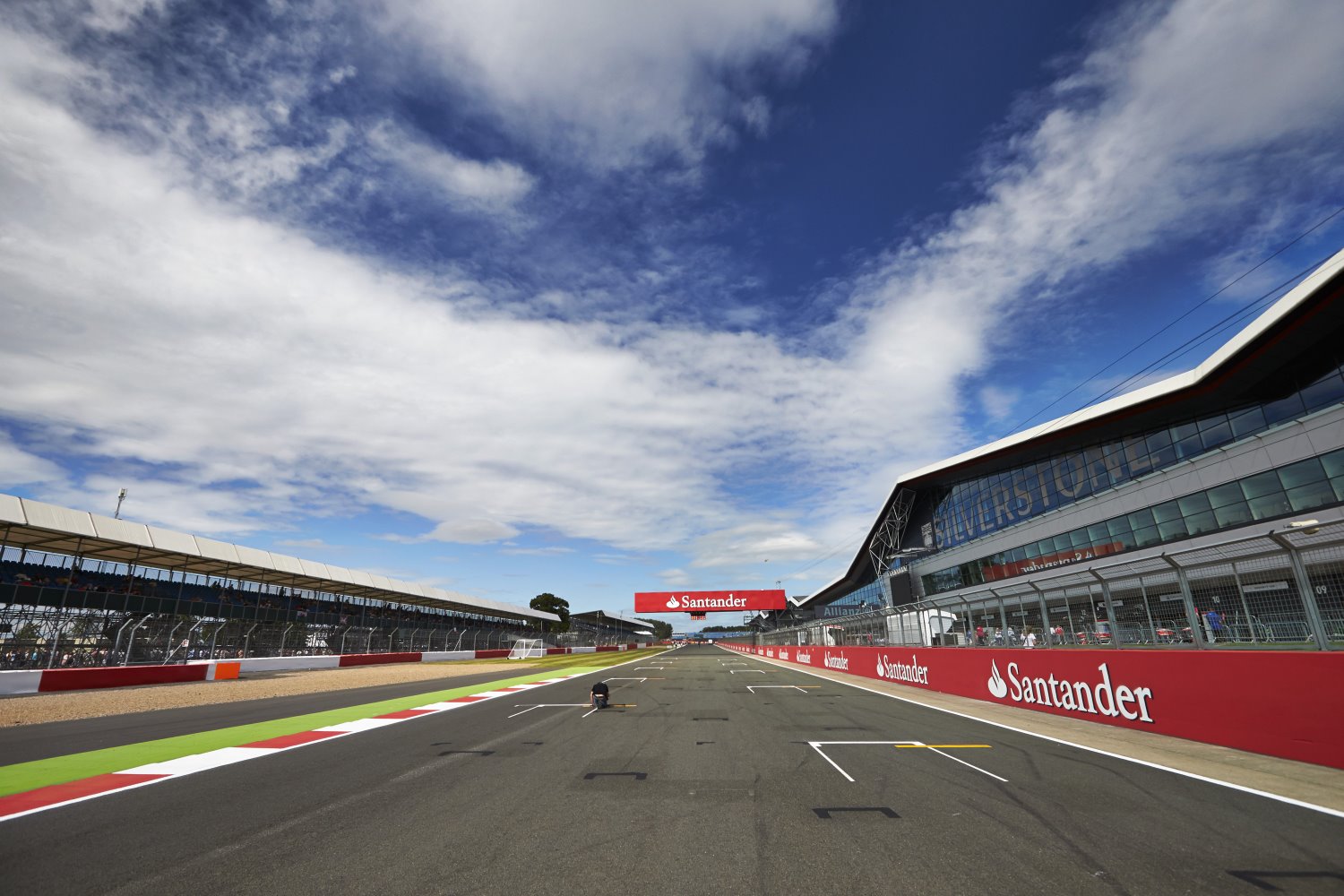 Canada GP boss not weighing into Silverstone dispute
(GMM) Canadian grand prix promoter Francois Dumontier says he does not want to weigh in on the dispute between F1 owner Liberty Media and Silverstone.

Making a visit to the scene of the British grand prix, Dumontier would only say to Le Journal de Montreal: "I can understand their concerns."

Liberty and Silverstone are locked in a dispute after the circuit-owning British Racing Drivers' Club timed the triggering of a contract exit clause with this weekend's race.

In a statement, Liberty had hit out at Silverstone's "posturing", with the BRDC angling for a reduced race fee.

"I know we are not treating them unfairly," F1 CEO Chase Carey said at Silverstone. "We are treating them consistently with others.

"Our preference is for Silverstone but the British grand prix certainly does not have to be here. We have had expressions of interest from other places in the UK, but I'm not trying to play one against the other," he added.

But Dumontier, who organizes Montreal's popular Canadian GP, did not want to weigh in on the dispute and had only positive words to utter about Liberty.

He said the London street demonstration event earlier this week was an "excellent" initiative.

"There is certainly a wind of change blowing in F1," said Dumontier.

"They want each grand prix to be like a Super Bowl, and I am in favor of these initiatives even though Montreal is already a reference for festivities during the week of a grand prix."

(GMM) Stoffel Vandoorne says he is happy the tide is finally turning on his difficult opening season in F1.

Earlier, McLaren-Honda was hinting the Belgian rookie needed to up his game, but now both sides are referring to his long-term contract and apparently assured seat for 2018.

Vandoorne then had his best-ever qualifying session at Silverstone, taking his normally uncompetitive Honda-powered car through to Q3.

"I think in the last races we have been going in the right direction," he told the RTBF broadcaster.

"I think in Baku and Austria I made a real step forward, doing the same as Fernando (Alonso) and managing to be really close to him."

Vandoorne, 25, admitted his better performance is giving him a much-needed confidence boost.

"In fact I never doubted it," he said, "but the start of the season was not easy after all the problems. It was also necessary to change the relationship with the team in terms of setting up the car to move a little more in my direction.

"Lately I think things are in a good direction for me," Vandoorne explained. "I feel more and more comfortable and confident."

(GMM) Although boss Vijay Mallya is happy with his pink-colored cars in 2017, the sponsorship deal has landed Force India in legal trouble.

Bild am Sonntag newspaper reports that an agency is claiming a commission for the EUR 12.5-15 million deal with Austrian water company BWT.

"At the end of the day, I find the color quite attractive," Mallya said at Silverstone.

Less attractive is the prospect of being sued.

"It is clear from the complaint that while there was no contract signed by Force India, there was a written commitment," the German newspaper report claimed.

It is a rare paddock visit for Mallya this weekend, as his dispute with Indian authorities resulted in his passport being seized.

"I certainly miss races like Monaco and Singapore," said the former Indian billionaire. "But I had that for eight and half years.

"Now I'm back in the office, but that's also important."

Mallya has denied that the Indian dispute is why the team is likely to drop the word 'India' from its name for 2018.

No more 'risky' starts for Bottas

(GMM) Valtteri Bottas says he will not attempt a "risky" race start at Silverstone.

After a gearbox penalty and a poor qualifying, the Finn finds himself down the British grand prix grid.

So when asked if he will try to emulate the perfect and yet controversial start that saw him effectively anticipate the red lights from pole in Austria a week ago, he answered: "No.

"I will not do that anymore. I want to do a good start but I will not gamble."

Mercedes has had problems with its gearbox not only at Silverstone but also in Austria.

Team boss Toto Wolff said: "We are trying to maximize our potential in every area, but sometimes it goes too far.

"This is the new reality where we are looking for speed wherever possible, but we have changed both boxes now and the problem will not recur."

(GMM) Daniil Kvyat says he is open to staying at Toro Rosso next year.

In Austria a week ago, Red Bull chief Christian Horner said there is no reason the Russian should not be retained by the energy drink company's second F1 team.

"First of all, I appreciate Christian's kind words," Kvyat said at Silverstone.

"I do not see any reason to not cooperate, but I also want some answers," he added.

Interestingly, Kvyat's comments coincide with rumors that Toro Rosso could switch from Renault to Honda power for 2018.

He continued: "If they have some plans, I want to know about it as soon as possible, because the stage of the season is coming when you really want to know what the future holds.

"It would be nice to know about it as soon as possible, but I do not see any reason why we cannot continue to cooperate," the 23-year-old added.

"I think they realize that the earlier a driver learns about their future, the more attention they can give to their work," said Kvyat.

Critics suggested that as the British hero and arguably F1's most popular driver, Hamilton should not have been the only driver absent in the UK capital.

That criticism came amid speculation Hamilton and Wolff have fallen out, after the Mercedes chief accepted an invitation to title nemesis Sebastian Vettel's recent birthday party in Switzerland.

"The press has completely delusional stories about the relationship between myself and Lewis, and Lewis and the team," Wolff said at Silverstone.

"Actually it's quite the opposite."

As for the criticism about Hamilton's conspicuous London absence, Wolff said: "This three time world champion has just set another record for the number of pole positions, so to doubt that he knows how to best prepare for a race weekend is an insult.

"As team boss, I give him that freedom and if he thinks it is better to stay away, to spend some time with friends, then so be it," he added.

A bullish Wolff also slammed Romain Grosjean, after the Haas driver hit out at the stewards for not penalizing Hamilton for an alleged blocking move in qualifying.

"I understand that the title fight is important," Grosjean had said, "but there is far too much inconsistency in the decisions."

Wolff hit back by characterizing Grosjean as a driver who regularly complains.

"Given what happened in the past, he should just be happy that he is in formula one," said the Austrian.

(GMM) Mercedes has hit back at rumors the German carmaker might pull out of formula one in the coming years.

But at Silverstone, Mercedes revealed that its title sponsor Petronas – the Malaysian oil company – is in fact staying on board beyond the end of 2018.

Mercedes said the "multi-year extension of the title partnership will cement more than a decade of partnership between Mercedes and Petronas".

"The partnership has given us very positive results for many years and I am pleased to announce the extension of the sponsorship contract with the team."

Mercedes added: "Although this (2017) may be our sport's final visit to Sepang for the foreseeable future, Petronas is committed to formula one and to Mercedes for the long term."

Vettel sure Ferrari can pressure Hamilton

Sebastian Vettel hopes he and Ferrari team-mate Kimi Raikkonen can use the advantage of two cars at the sharp end of the grid to put pole-sitter Lewis Hamilton under pressure at the British Grand Prix.

Hamilton swept to pole position for his home race at Silverstone, with a half second buffer back to Raikkonen, as Vettel set the third best time.

Valtteri Bottas, meanwhile, qualified only fourth, and will drop to ninth on the grid due to a gearbox penalty, leaving Hamilton on his own up front against the Ferrari pair.

"The target is to put him under pressure, he's been certainly very competitive all weekend, nevertheless, I think it's been a positive day for us."

On his final Q3 run, in which he lagged behind Raikkonen, Vettel rued tyre warm-up issues, commenting: "I was a bit compromised, in the first sector especially.

"The tyres were not where they should have been, they [Ferrari] should have seen that on the out lap that I was in a bit in traffic, in a bunch of three or four cars.

"It's not ideal but anyway it's a decent result, the most important [thing] is car is good, we improved it for today and also tomorrow it should be better."

Raikkonen echoed Vettel's comments and believes Ferrari can ramp up the pressure in race trim.

"I don't know how exactly how far we were from the first [position], but we can guess where we were giving away lap time," said Raikkonen.

"We have a good car, obviously it's not fast enough [over one lap], but for the race I think we can challenge them and give [him] a good run with both of us there, so we'll try and make the best out of it."

Pirelli says two-stop faster at Silverstone
Formula 1 tire supplier Pirelli says a two-stop strategy will be the quickest approach to the British Grand Prix, should the race take place in dry conditions.

A one-stop plan, made up of one stint on Super Softs (21 laps) and a 31-lap stint on Softs, would be "very close" behind a two-stop.

With high degradation on Super Softs (more than 0.15 sec/lap), the fastest strategy is still a two-stop, but featuring a 14-lap Super Soft stint followed by two stints on Softs (19 + 19 laps).

A one-stop, with a 20-lap stint on Softs, and a 32-lap stint on Mediums, would also be an "interesting" option, according to Pirelli's data.

Current weather forecasts predict that light rain will arrive late morning and linger ahead of the race.Formula 1 tire supplier Pirelli says a two-stop strategy will be the quickest approach to the British Grand Prix, should the race take place in dry conditions.

A one-stop plan, made up of one stint on Super Softs (21 laps) and a 31-lap stint on Softs, would be "very close" behind a two-stop.

With high degradation on Super Softs (more than 0.15 sec/lap), the fastest strategy is still a two-stop, but featuring a 14-lap Super Soft stint followed by two stints on Softs (19 + 19 laps).

A one-stop, with a 20-lap stint on Softs, and a 32-lap stint on Mediums, would also be an "interesting" option, according to Pirelli's data.

Current weather forecasts predict that light rain will arrive late morning and linger ahead of the race.