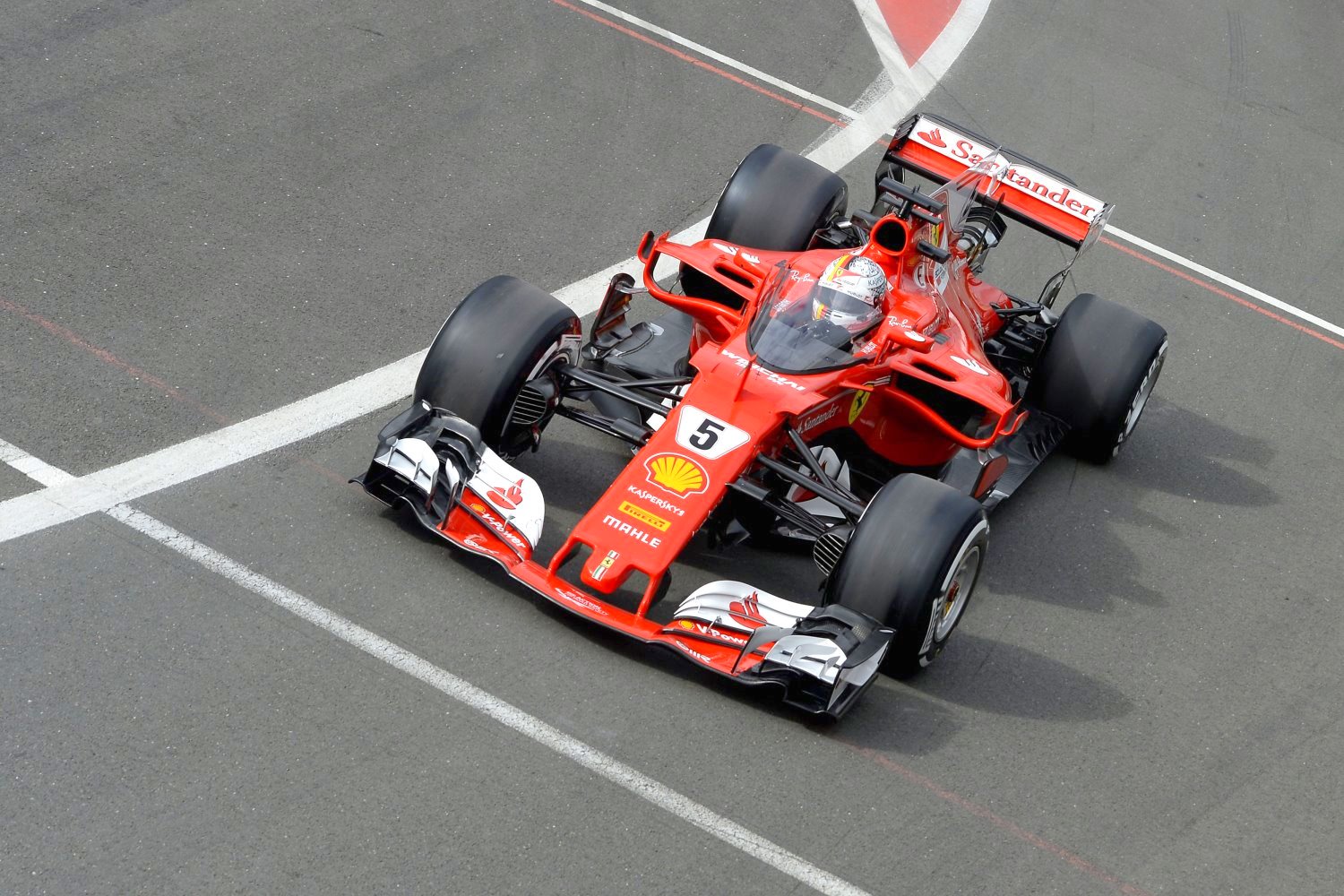 "We had a run planned but I didn't like it so we took it off," he said.

Vettel also said dismounting from the car was difficult.

Curiously, the 'Shield' also appears to lack the support of the Grand Prix Drivers' Association, whose new director Romain Grosjean is a vocal critic.

"Of course we want to improve security, but it is not up to us to find a solution," said the Frenchman.

If 'Shield' is ultimately rejected, the FIA has warned that it will revert to the controversial 'Halo' concept for 2018.

But Alonso is not writing off the Shield yet.

"We'll have a driver meeting now, talk about it and what the opinion of it is and whether it can be improved," said the Spaniard.

A British newspaper this week said Lewis Hamilton's conspicuous absence at the F1 event in London could have been because he was furious with his Mercedes boss.

Around the time of Vettel's birthday, the German had to publicly apologize for deliberately crashing into title rival Hamilton's car at Baku.

In the same period, amid rumors the quadruple world champion is flirting with a switch to Mercedes, the German team's boss Wolff attended a birthday party at Vettel's home in Switzerland.

"Sebastian and I are neighbors," Mercedes chief Wolff is quoted by Osterreich newspaper, "so it's normal that we sometimes visit one another."

When also asked about Wolff's attendance at Vettel's party, Hamilton answered: "All I can do is laugh at that one.

"That's the dumbest question I've had so far."

However, Red Bull boss Christian Horner thinks Wolff and Vettel would have been talking business at the birthday party.

"I would think he's got Toto in his ear saying 'Extend for a year (at Ferrari)' and then he's probably got Ferrari saying 'It's three years or nothing'," he said.

(GMM) Carlos Sainz Jr. says he will be happy to stay at Toro Rosso next year.

Just a week ago, the Spaniard was publicly criticized by his Red Bull bosses after saying it was "unlikely" he would stay at the energy drink company's junior team in 2018.

Red Bull's anger was probably because they had just taken up the 'option' in the 22-year-old's contract, just as Sainz was hinting that he might accept an offer from elsewhere in pitlane.

But at Silverstone, the driver said: "If I have to stay in Toro Rosso – if that's what I have to do – then yes.

"People tend to see it as bad news, but I see it rather positively," Sainz is quoted by El Mundo Deportivo.

"It is good when your bosses trust you for a fourth year. It would be the first time in history that a driver has been at Toro Rosso for four years," he added.

"If I'm being renewed in June or July it's because I'm doing a good job. I must be happy with that.

(GMM) A switch to customer Mercedes power appears to be back on the menu at McLaren.

A week ago, it seemed that McLaren and Honda were stepping away from the precipice of looming divorce.

But now at Silverstone, McLaren director Jonathan Neale says the current situation with Honda struggling for performance and reliability is "not sustainable".

"I think naturally we reach a point of inflection with Honda where we ask ourselves 'Where do we go from here?' 'What do we have to do differently to restore that level of competitiveness?'"

So the latest buzz in the Silverstone pitlane is that the decision has definitely been made to dump Honda, with the last hurdle being the extraction from a binding contract.

It seems McLaren's preferred alternative for 2018 is customer Mercedes power, but there have also been rumors of talks with Renault and Ferrari, too.

"In F1, when anybody says they're not talking to anybody, the answer is everybody's talking to everybody," admitted Neale.

But another hurdle is the F1 rules.

Currently, Mercedes already supplies to its own works team in addition to Williams and Force India, so a fourth would require a rules tweak.

"You're right," said Neale. "In order for an engine manufacturer to supply more than three teams it does require FIA approval.

"We are making sure that we maintain our good relationships with FOM and the FIA while we work through a difficult situation."

'No objections' to Sauber deal – Honda

(GMM) Talks are back on between Sauber and Honda.

Earlier in 2017, the now-ousted former Sauber boss Monisha Kaltenborn negotiated a customer engine deal with the struggling Japanese manufacturer for 2018.

But Frederic Vasseur is now in charge at the Swiss team, triggering speculation the deal is off.

Indeed, the rumble in the Silverstone paddock is that the Sauber-Honda arrangement only ever got to the point of a letter of intent and official announcement rather than a concrete contract.

"I built up a lot with Monisha Kaltenborn and we would be happy to have Sauber. Honda has no objections to the originally agreed deal."

Giovinazzi hopes for 2018 race seat
(GMM) Antonio Giovinazzi is hoping Haas is the key to his future in F1.

After signing up as Ferrari's reserve driver, the Italian was surprised early this year when he got two race outings to replace the injured Pascal Wehrlein at Sauber.

Now he is back in the spotlight with seven Friday practice outings for another Ferrari customer, the American 'B' team Haas.

But he said at Silverstone: "I'm not thinking about the future but just focusing on my work."

When asked what his goal is for 2018, however, Giovinazzi admitted: "My goal is to compete in formula one, but now I'm more focused on these seven practices.

"After that, let's see what the options are for next year. I hope I can find a place but I know how difficult it is to get into formula one," the 23-year-old said.

Asked if his chances are good of a race seat with a Ferrari engine customer like Haas next year, Giovinazzi answered: "I think it's too early to talk about it. It's only July."

Daniel Ricciardo is set to join Valtteri Bottas in taking a five-place grid penalty at the British Grand Prix, after Red Bull fitted a new gearbox to his Red Bull RB13.

Ricciardo has finished on the podium across the past five Grands Prix, including the top step in Azerbaijan, to strengthen his hold on fourth in the standings.

As Ricciardo's gearbox has not lasted the mandatory six events, the Australian is set for a five-place drop, though this still needs to be confirmed by stewards.

Mercedes driver Bottas will also drop five places from wherever he qualifies, with the team confirming the sanction on Friday.

Abiteboul: No obvious roadblocks for Kubica

Renault chief Cyril Abiteboul says there are "no obvious roadblocks" for Robert Kubica regarding a Formula 1 return, following his recent test runs with the team.

Kubica raced in Formula 1 between 2006 and 2010 but his Grand Prix career was cut short when he sustained serious arm injuries in a rally accident in 2011.

He returned to action in rallying, before several circuit outings, and recently completed test runs in a Renault-run 2012-spec E20 at Valencia and Paul Ricard.

Following the first test, Kubica stated that he was eyeing a "proper comeback" and, although remaining cautious, Abiteboul sees no major issues ahead.

"The first test was nothing more than an opportunity for him to get back behind the steering wheel of an F1 car," reiterated Abiteboul at Silverstone on Friday.

"It's an F1 car from 2012, with demo tires, a V8 engine, which doesn't exactly match the current F1 car, so whatever we do is not quite representative.

"At the second test, however, we sort of worked more towards what could look like a plan to give both him and us the opportunity to assess a little bit more his limitations and abilities.

"He's still quick and very consistent and, more importantly, still has the energy, the drive and the enthusiasm that he always had and carried into the team."

Pushed on whether Kubica is race-ready, he added: "I would not say yes or no.

"It's not like a test that you are passing like an exam… we've not seen any obvious roadblocks, but having said that, testing in this circumstance and testing a modern car is something different.

"Again, this situation is complex, we're not doing it for PR purpose, although we see it's creating lots of media expectation and focus. It's not for that. We care so much more for Robert than that."

Abiteboul refused to expand on potential future opportunities for Kubica, amid speculation that the Pole could appear at the post-Hungarian Grand Prix test with Renault.

"It's too early to talk about next steps, I don't want to [add] to speculation," he said.

"Right now, the focus is on getting the most [out of] the overall line-up and package we have, and then we'll be thinking about 2018 in due course, which is not just now."

Max Verstappen says that Red Bull was "too slow" relative to rivals Ferrari and Mercedes on the first day of practice for the British Grand Prix.

Red Bull, which has brought an aerodynamic update to Silverstone, started the weekend as Mercedes' main challenger, with Max Verstappen leading the team's charge.

However, in second practice, Verstappen and team-mate Daniel Ricciardo slipped to fifth and sixth respectively, 0.602s and 1.090s adrift of pace-setter Valtteri Bottas.

Speaking after Friday's sessions, Verstappen commented: "I think we are a little bit too slow at the moment, so we still need to work.

"I was not really happy in second practice with the balance of the car. I felt a bit better in first practice, so I need to understand why."

Asked about Mercedes potentially increasing its advantage, after fitting new engines to its cars, he added: "Well, I guess that's the case the whole year, isn't it?

"We're always running a bit behind in that way [on the engine side], so we just need to work hard on the car to find time."

Verstappen narrowly avoided Felipe Massa in FP2, as Massa suddenly slowed between Vale and Club, but the stewards opted not to take any action against the Williams driver.