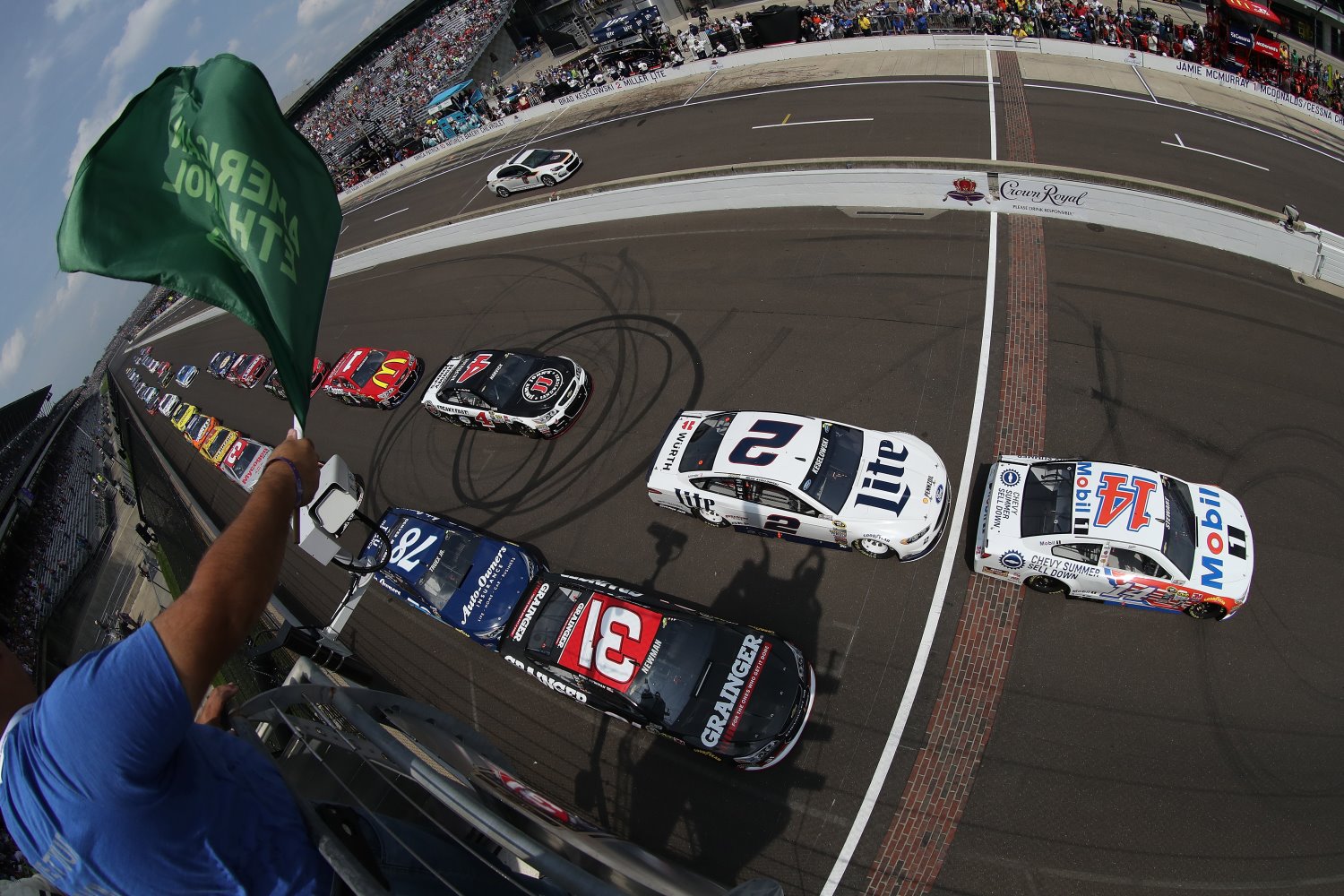 The Brantley Gilbert Big Machine Brickyard 400 is one of the biggest races in the Monster Energy NASCAR Cup Series, as every driver covets the chance to kiss the Yard of Bricks as the race winner.

This prestigious race takes place on one of the biggest tracks in the sport, the 2.5-mile Indianapolis Motor Speedway. Only the 2.66-mile Talladega Superspeedway is longer among ovals on the Cup schedule.

And the way Hendrick Motorsports rising star Chase Elliott sees it, the new stage racing format introduced this year into the Cup Series will create even bigger opportunities for teams and drivers to gamble on different strategies at IMS than shorter tracks.

This year's 160-lap race will be divided into three stages. Stage 1 takes place from the green flag through Lap 50. Stage 2 is set for Laps 51-100, with Stage 3 unfolding from Lap 101 until the checkered flag.

"When you have a scheduled caution, that opens up so many ways to play strategy," Elliott said. "I think guys are starting to see that. Guys that have seen it, and they're starting to play with how they can maximize that and make the most of their day.

"The big tracks like here, when you can come down pit road and you're close enough to the leader or you are the leader that you won't go a lap down on pit road, that's huge. To me, the strategy play becomes massive. There are risks you take with that, but I think it puts on a good show and mixes up the field."

Elliott, 21, from Dawsonville, Georgia, visited IMS and Indianapolis on Thursday, July 6 to promote the Brantley Gilbert Big Machine Brickyard 400 on Sunday, July 23. He took a helicopter tour of the city, threw axes at logs at Bad Axe Throwing in downtown Indianapolis, met with local media, raced a kart against IMS President Doug Boles and met and chatted with young USAC .25 competitors racing July 5-9 at the Battle of the Brickyard at IMS.

IMS has been a special place for Elliott since Aug. 4, 2002, when he was just 6 years old. That day his father, NASCAR legend Bill Elliott, pulled off a stunning, dominant win toward the end of his NASCAR Hall of Fame career by capturing the Brickyard 400. Young Chase was at IMS that day, standing on the Yard of Bricks in a race team shirt for photos with his mother and father and the race trophy.

"I feel like that was one of the biggest victories of his career and one of the only ones I was around for as far as really big victories," Chase Elliott said. "It was very cool to be here and be a part of that in a small way, be in the pictures, at least. We have talked about it, and it's always a special place because of that."

IMS also is special because it's one of the trickiest balancing acts between power and handling in NASCAR. The front and back straightaways require horsepower to cover their respective 5/8ths of a mile as quickly as possible. But a good-handling car is required to navigate the four turns, banked at a relatively flat 9 degrees.

"Finding that middle road is important here," Elliott said. "Power is key, also aero balance in the car and long straightaways, making sure the car is not too draggy. You want to maximize that. On the same front, if you don't get through the corner well, the straightaway is never going to be good.

Elliott also continues to learn about the razor-thin line between winning and finishing second in the ultra-competitive Cup Series. He has 11 top-10 finishes in 18 starts this season in the No. 24 NAPA Auto Parts Chevrolet, second only to Martin Truex Jr. in that department.

But Elliott is still searching for his first win and arguably tops the list of NASCAR's most eligible first-time winners.

If that victory came at the Brickyard, Elliott and his father would form the first father-son duo to win this race. Hendrick teammate Dale Earnhardt Jr. also has that chance this year in his final start at IMS, as Dale Earnhardt won in 1995 at IMS.

"We've had some good weeks and bad weeks and everything in between," Elliott said of his 2017 performance. "We just haven't had a fantastic week yet. That's obviously the goal. We'll keep after it.

"This has been a fun place to come to, and it will always be special."

The Brantley Gilbert Big Machine Brickyard 400 will start at 2:30 p.m. Sunday, July 23, featuring all of the stars of the Monster Energy NASCAR Cup Series.