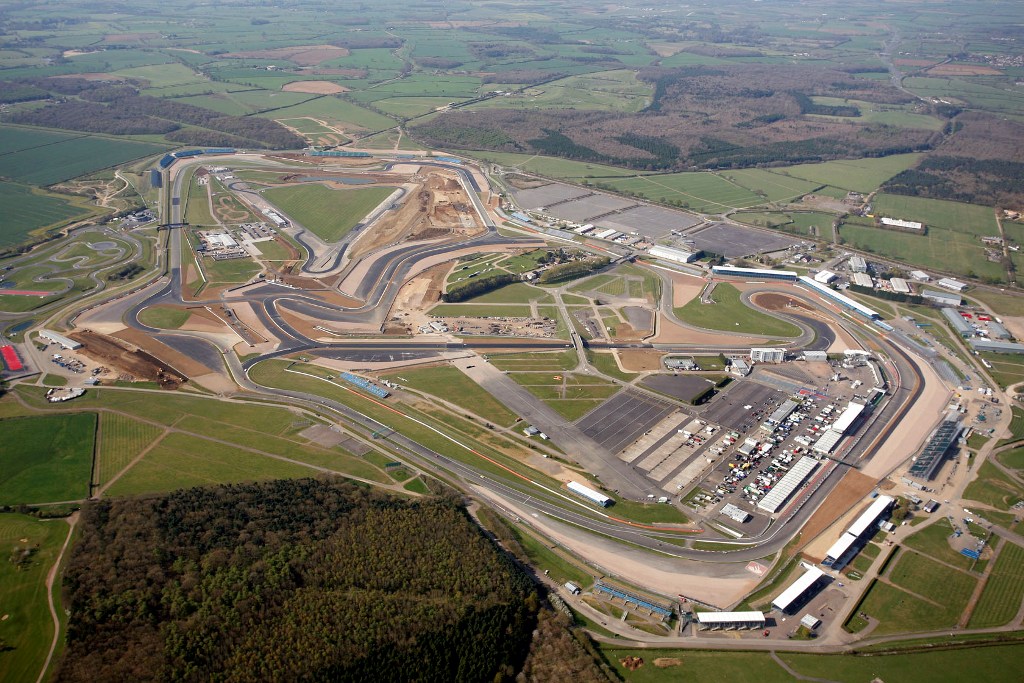 Silverstone hits back at 'posturing' charge
(GMM) British grand prix organisers have hit back at F1 owner Liberty Media, after being accused of "posturing".

We reported earlier that, as the British Racing Drivers' Club triggered a post-2019 break clause in its race contract, Liberty criticized the timing of the move in grand prix week.

BRDC chairman John Grant hit back: "It was absolutely not posturing.

"We had one chance to protect our future. We left it to the last possible moment as we wanted to keep all our options open."

However, as Silverstone gears up for this weekend's 2017 race, the news is not a good look.

"This week should be one of great celebration for F1 and Silverstone," a Liberty spokesperson said. "We deeply regret that Silverstone has chosen instead to use this week to posture.

"We offered to extend the current deadlines. Regretfully the Silverstone management has chosen to look for a short-term advantage to benefit their position," he added.

But Grant argued that Silverstone can simply no longer afford the escalating annual fee, which was presented by former F1 supremo Bernie Ecclestone with "no alternative".

"We want to make it clear that we are open to further cooperation with our friends at Liberty Media," he said.

However, it may be a risky strategy for the BRDC, especially as Liberty is promoting a pre-race demonstration event in the capital London this week.

"Liberty say they want to protect the iconic circuits, and Silverstone is the only iconic formula one circuit in Britain," he insisted.

(GMM) Robert Kubica has taken yet another step on his road back to the F1 grid.

Earlier, the former grand prix winner tested a 2012 Renault at Valencia, and the French team now wants to give him a full evaluation outing.

In preparation, the Pole – who almost severed his right forearm in a 2011 rally crash – revealed that he has tried Renault's 2017 car in the simulator at Enstone.

"I was able to try the car in its configuration for this year," the 32-year-old told Sky Italia.

"The day went pretty well, but I do not want to go into details. But yes, I had the opportunity. I was happy and so was the team," Kubica added.

The big question mark is whether the former Renault and BMW driver's right arm is able to cope with the full rigors of life as a F1 driver.

"In my life I've had better days," he answered, "but also much, much worse.

"The current situation is good, I think. Stable and good. Many things have changed in my head, too. I do not have certain limitations that I used to have."

And so Kubica does not hide that he is pushing hard to come back to formula one.

"If something happens there will be satisfaction, but I just have to keep a cool head," he said.

"The step I took in Valencia was huge and I have to go step by step now. I hope I can get closer to the dream goal — I will not hide it."

Toro Rosso's Daniil Kvyat has joined two other drivers at the front of the penalty points charts, with seven, after being deemed guilty for a first-lap collision at the Austrian Grand Prix.

Kvyat locked both front tires under braking for Turn 1 at the Red Bull Ring and ran into the back of Fernando Alonso, who was pitched into a spin, in turn swiping Max Verstappen, with both forced out.

Kvyat was handed a drive-through penalty for triggering the collision, with stewards deeming him "wholly" to blame, and also had two penalty points added to his Super License.

The sanction brings Kvyat's running 12-month total to seven, after he received two in Austin last year (causing a collision), one in Mexico (track limits) and two in Canada last month (over his grid position).

Vettel entered the Austrian Grand Prix weekend on nine but had the two he received at last year's British Grand Prix removed from his license, with the 12-month limit expiring.

Vettel's next penalty points will not be removed until early October, when his points for colliding with Nico Rosberg at the start in Malaysia are wiped from the record.

Sainz Jr., meanwhile, will lose two of his points at the end of this month, a year on from being sanctioned for blocking at the German Grand Prix.

Should a driver receive 12 penalty points during a 12-month period, they will have their Super License suspended for one race.

Alongside Kvyat, Stoffel Vandoorne was the only other driver to be handed penalty points in Austria, having received two for ignoring blue flags during the race, bringing his total to five.

Stroll, though, picked up a reprimand for crossing the white line at pit entry, his first offence of the season.

Should a driver pick up three reprimands over the course of a season, of which two or more are for driving infringements, they will receive a 10-place grid penalty.

Sergio Perez is the only driver walking that tightrope, having picked up two 2017 reprimands, with one for a driving infringement, after a Safety Car delta transgression in Australia.

Perez's other reprimand was issued when he was late for the national anthem on the grid in China.

Mercedes 'do not need Alonso' – Lauda

(GMM) Fernando Alonso's hopes of joining a winning F1 team for 2018 appear to be waning.

Earlier, his manager Flavio Briatore suggested the Spaniard was targeting Mercedes or Ferrari, after three years of struggling with McLaren-Honda.

But Ferrari president Sergio Marchionne said in Austria last weekend that the Maranello team is "not interested" in linking back up with its former winning driver.

Niki Lauda, the Mercedes team chairman, is quoted by AS newspaper: "I do not think Ferrari wants to have him again.

"He left with a contract, which is the same as what happened with him and McLaren-Mercedes," the F1 legend told the Spanish sports newspaper.

As for the possibility of Alonso joining the Mercedes works team, Lauda said: "We have drivers who do their jobs, so if we win with Hamilton and Bottas, why do we need a replacement?"

Wolff: Hamilton still 'right in the fight' for title

Mercedes boss Toto Wolff insists Lewis Hamilton remains "right in the fight" for the 2017 championship despite a "tough run" over the last couple of races.

Hamilton led from pole position in Azerbaijan but was forced to make an additional stop due to a loose headrest, and dropped to fifth, behind title leader Sebastian Vettel.

Mercedes detected damage on Hamilton's gearbox prior to the Austrian Grand Prix and a replacement was required, meaning he dropped from third to eighth on the grid.

Hamilton made up ground early on before using the undercut to overhaul Kimi RÃ¤ikkÃ¶nen, and set off in pursuit of Red Bull rival Daniel Ricciardo for third.

Wolff, though, remains adamant that Hamilton can fight back, starting at his home event in Britain this weekend.

"He had a glimpse of P3 on the final laps but it wasn't quite meant to be," reflected Wolff.

"It was an afternoon of damage limitation for him and, in the final result, these are 12 points won and not six lost to Sebastian.

"He has had a tough run with the headrest problem in Baku and then the gearbox penalty but he is still right in the fight.

"It's not even half time in the championship and there are 275 points still to be won.

"Our target will be to let him fight back in the best possible way in Silverstone."

Mercedes stretched its lead over Ferrari in the Constructors' Championship to 33 points, as a result of Valtteri Bottas' victory and fourth for Hamilton.

Vandoorne feels points were within reach

McLaren-Honda driver Stoffel Vandoorne felt his first points of 2017 were within reach as he came home in 12th place at the Austrian Grand Prix.

Vandoorne was the sole McLaren in the race after the opening lap, with Fernando Alonso sustaining terminal damage when he was struck by Daniil Kvyat, and sent into Max Verstappen, at Turn 1.

Vandoorne was harassing Renault's Jolyon Palmer for 11th, who in turn was hunting down Williams rookie Lance Stroll, but received a drive-through penalty for ignoring blue flags.

The Belgian thus slipped away from the battle, and expressed frustration, though did not feel that the sanction was the influential factor, pointing to a lack of straight line speed.

"I'm actually a little bit disappointed with 12th – if you look at the pace we had throughout the race, I think points just might have been possible, and that's very encouraging," he said.

"Our weekend has generally been quite positive – we had no problems, our pace has been reasonable, and I felt very comfortable with the car.

"Unfortunately, I was stuck behind some cars and it was impossible to overtake – but that's how it is for us at the moment.

"I got a penalty, but we had to try something, and I don't think I really lost a lot in terms of the overall result.

"It's a shame we didn't score points, but our pace all weekend has been a positive for the whole team."

Racing Director Eric Boullier reckoned Vandoorne demonstrated encouraging process over the course of the weekend, after a difficult few events.

"Stoffel showed very solid pace all weekend, and he and his team looked to have made demonstrable progress in every session," said Boullier.

"His race was solid, although he couldn't really show the car's true potential after spending the entire race running in dirty air.

"We'll take his drive-through penalty on the chin – he was pushing at the time to try and have a go at Palmer, and it was just an unfortunate consequence of that."

Tens of thousands of fans "pouring into Silverstone" for the British Grand Prix this weekend "will face intense security checks in the wake of the terrorist attacks in London and Manchester," according to Kevin Eason of the London EVENING STANDARD.

Police and security forces will "throw a ring of steel around the 800-acre site" in Northamptonshire for the four days of the event.

They warned fans to "bring only one bag, no bigger than a rucksack, to the turnstiles, which should be tagged with names and mobile numbers."

Silverstone officials are also "warning of long queues because of random bag searches, although they are promising free supplies of water once inside the gates." EVENING STANDARD