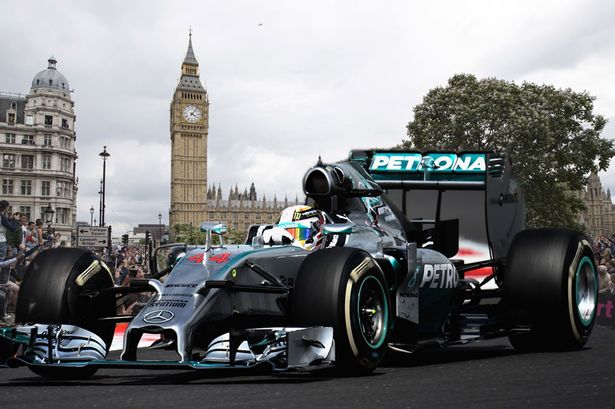 Formula 1 today announced F1 Live London, a spectacular show in the heart of the British capital on July 12, featuring Formula 1 teams, drivers and cars, alongside a host of stars and headline music acts.

Formula 1 is hosting the event to celebrate a new era, focused on bringing fans closer to the world’s most exhilarating sport. The live stage show in Trafalgar Square and car parade on Whitehall will also mark the first time in Formula 1 history that all 10 teams have come together outside of a race weekend to put on a show for the public.

The event will be formed of two parts – an F1 Schools and Innovation Showcase from 12pm to 4pm and the F1 Live London Show and Parade from 5.30pm to 9pm. F1 fans who are unable to attend the event can watch the action live from 6pm BST on www.f1.com/F1live, www.youtube.com/formula1 and on the Sky Sports F1 channel.

There are 40,000 UK-based engineers currently working in Formula 1. To reflect and expand on this, the event will provide a broad outline of the exciting opportunities and careers open to children of all ages interested in being the next generation of leaders who want to work in the sport. An F1 Schools and Innovation Showcase in Trafalgar Square will take place from 12pm to 4pm, helping children of all ages, young adults, teachers and parents to learn about careers linked to Formula 1 and skills in Science, Technology, Engineering and Maths (STEM).

For children aged 11 to 18 there is F1 in Schools Ltd, a not-for-profit company established in the UK in 2000. Its remit is to give an opportunity for students to learn all about STEM-related subjects, with the aim of helping them into a career in engineering and motor sport specifically.

For those looking at higher education, they can turn to Formula Student, Europe's most established educational motorsport competition. Its aim is to develop young engineers and encourage more young people to take up a career in engineering. There will also be fun activities for younger children, including racing simulators, pit stop challenges and remote-control racetracks.

Emphasizing the importance of all children feeling empowered to follow a career in motorsport, Dare To Be Different (D2BD), a UK-based group started by ex-driver Susie Wolff in 2016, will also give talks to female schoolchildren. D2BD will offer time with some of motorsports’ leading women such as Williams’ deputy team principal Claire Williams, with the goal of inspiring, connecting and celebrating women in the sport.

From 5.30pm to 9:00pm, Trafalgar Square will host the biggest live show in its history, including appearances from Formula 1 stars and legends as well as a number of celebrity guests. Show cars will be lined up outside the National Gallery while others will form a spectacular moving display, going from Whitehall up to Trafalgar Square and back again. There will be music as well as a number of interviews with F1 drivers as well as leading figures in the sport.

Sean Bratches, Managing Director, Commercial Operations at Formula 1 said: “F1 Live London is the most striking example yet of Formula 1’s evolution this year. We feel there is no better way to celebrate the exciting season we have had so far than to have this landmark event in London on the eve of the British Grand Prix. This is all about giving our fans the opportunity to get closer to the teams, cars and drivers they love."

Mayor of London, Sadiq Khan, said: “F1 Live London is a brilliant opportunity to show young people in our city that learning about science and engineering can provide them with fantastic careers, and can be great fun. It will also bring fans of all ages and backgrounds together to celebrate a sport they are passionate about and in which Britain is a world leader."

We hope that they will leave Trafalgar Square awed and inspired, with an eye on any one of the myriad of career opportunities in British Motorsport and beyond. Westminster is fully supportive of this type of event and we have worked with all authorities to keep disruption to an absolute minimum."