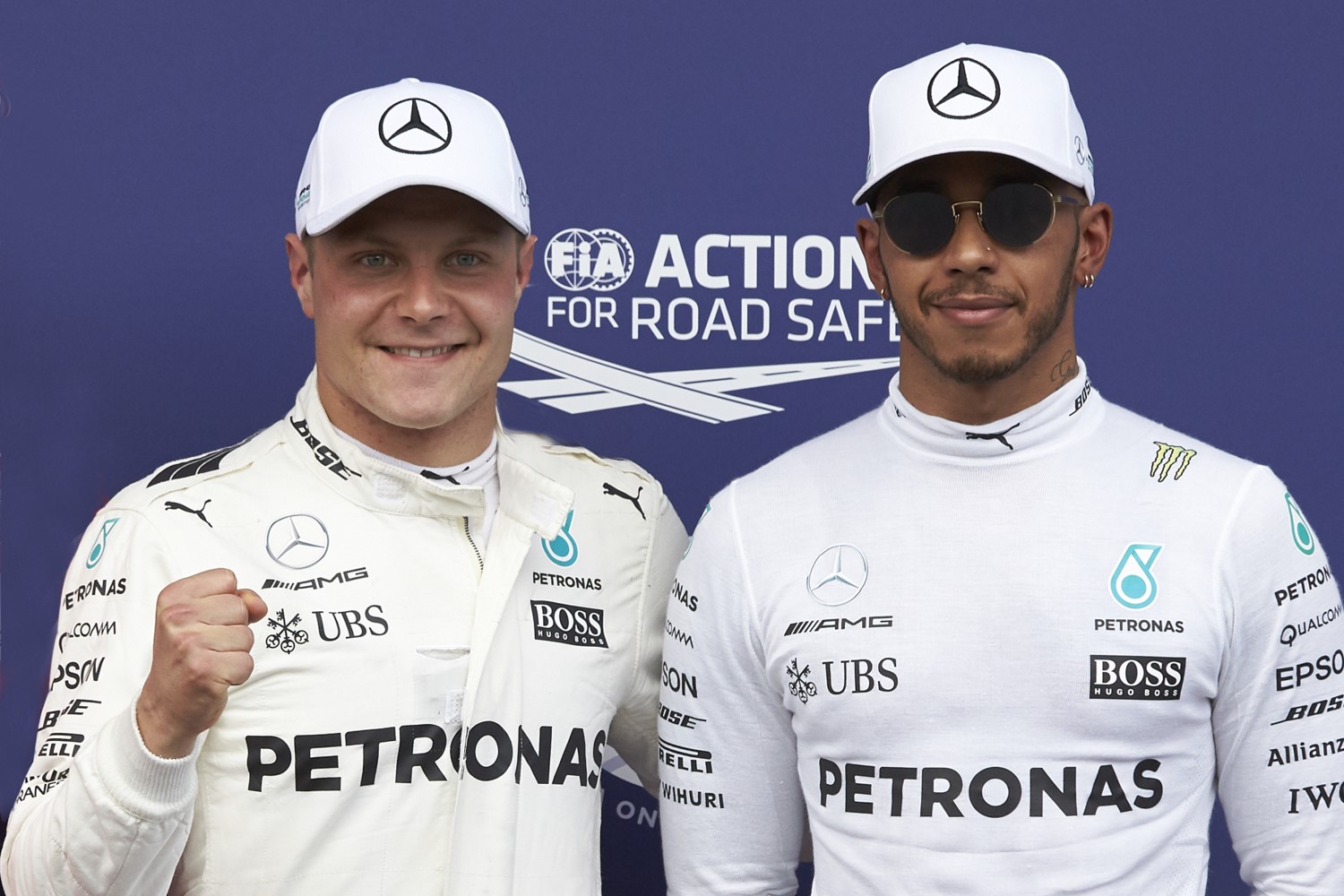 Bottas in fight for 2017 title – Hamilton
(GMM) Valtteri Bottas is in the hunt for the 2017 world championship.

That is the claim of his Mercedes teammate Lewis Hamilton, after Finn Bottas won his second grand prix of the season in Austria.

"Of course he is," Hamilton told the Finnish broadcaster C More.

"He is 15 points behind me, which is closer than I am to the (championship) lead.

"Valtteri is doing a fantastic job and it definitely will be a fight to the end," he added.

However, Bottas came very close to potentially losing his Austrian victory, with both Sebastian Vettel and Daniel Ricciardo accusing him of jumping the start.

F1 steward Mika Salo told Ilta Sanomat newspaper: "From the camera, it looked like a false start. But the limits for a false start were not exceeded."

FIA spokesman Matteo Bonciani said the electric jump-start detection system allows some car movement after the fifth light goes on as the drivers manage the clutch.

Salo agreed: "You look at the data and, according to the data, there was no jump start."

(GMM) Sergio Marchionne has issued a wake-up call to Kimi Raikkonen, whilst rejecting rumors Max Verstappen or Fernando Alonso are in the running to replace him.

"We have not reached out to Red Bull about Verstappen and we are not interested in Alonso," the Ferrari president was quoted as saying in Austria.

"We have received some suggestions about Alonso's return, but we have two good drivers.

"So we are not interested — it is not possible for now for Fernando to come."

Sebastian Vettel's contract is also up at the end of the year, but Marchionne said the Maranello team is happy with the 2017 championship leader.

As for the German's teammate Raikkonen, the Italian-Canadian is quoted by La Gazzetta dello Sport: "He is a good guy and he is working, but we need him to (help to) win the constructors' championship."

And the Finnish broadcaster C More also quoted Marchionne as saying: "I think Kimi has to show a higher level of commitment to the process.

"There are some days when he is a little sluggish, but we'll see."

Finland's Ilta Sanomat quoted Raikkonen as responding to Marchionne's 'wake-up call': "I would of course prefer better results but I cannot do any more than my best.

"Unfortunately in formula one, everything does not always go as expected."

Marchionne said Ferrari will not "think about the drivers" for 2018 "until September", which interestingly ties in with Alonso's own timetable for his plans for next year.

"We have a world championship at stake and we want to arrive at the end of the season with the position we have now in the standings," Marchionne insisted.

(GMM) Sergio Marchionne has thrown a potential spanner in the works of F1's plans for its next engine regulations.

It was thought the sport was speeding towards keeping the basic 1.6 liter V6 engines beyond 2020, but adding another turbocharger and removing much of the complex and expensive 'hybrid' elements.

"Double turbo instead of the electric motor?" La Gazzetta dello Sport quoted the Ferrari president as saying in Austria.

"I have told Liberty this morning: I believe that creating a power unit system that denies the development of technology is a mistake.

"Either we do something clever and consistent with the development or we forget it. These easy solutions to remove the hybrid parts of the engine, or to bring back the 12 cylinder aspirated engines, are in the past," Marchionne added.

(GMM) Carlos Sainz Jr. and Red Bull have confirmed that the Spaniard is definitely under contract to drive for Toro Rosso in 2018.

The news clarifies the 'drama' in Austria at the weekend, when the 22-year-old driver said it is "unlikely" he will stay with Red Bull's junior team for a fourth consecutive season.

Red Bull chiefs bite back hard at the Spaniard, although Sainz insisted: "It was not even half the drama that it seemed.

"The subject is closed. My bosses trust me, they have renewed with me, so I don't see the problem."

Dr Helmut Marko, Red Bull's driver manager, indicated that the drama was created by Sainz's apparent lack of commitment to Toro Rosso for 2018, even though the energy drink company had officially triggered the 'option' in his contract mere days ago.

"We sent him a letter saying that we take up the option," Marko is quoted by Diario Sport newspaper.

"As far as I know – and since I have been in Red Bull it has been like this – it is not the driver who decides what happens with the contract," he added.

That is the view of Red Bull Racing boss Christian Horner, even though the Russian was criticized on all sides for his first lap crash in Austria.

It was similar crashes that put the young Russian's entire F1 career under a cloud last year, but Horner insists that Austria should not be a glitch as Red Bull decides what to do for next year.

"What happened (in Austria) can happen, so the decision won't be made on the basis of that," said Horner.

"I think Dany has had a pretty good season," he added.

"We also have a lot of time inside Red Bull to decide, but I see no reason why we should replace him at this time. Let's wait and see how things develop."

Calls grow for driver penalty system overhaul
(GMM) Calls are growing for F1 to overhaul its system of penalizing drivers for technical problems.

Former F1 driver Mark Webber was the first to bring up the issue of a driver suffering an engine or gearbox problem only to get further punished with a grid demotion.

"A lot of people turn on the TV for the race and say 'Why is my favorite driver at the back?' We lose people just for that," he said.

Webber suggested a better penalty would be a loss of constructors' points for the team.

Kevin Magnussen agrees: "If there is an engine failure the blame is more on the team's side, so I think taking a constructor point or something could be looked at."

In Austria, Lewis Hamilton's championship fight suffered a blow when Mercedes had to change his gearbox out of sequence, and the Briton got a five-place grid penalty.

"I always want the one who is the fastest to be able to win the race, so I believe technical failures should not so severely penalize the drivers.

"On the other hand, the situation can't get out of control, because if no one is penalized, we will always be changing the gearbox, engine and so on.

"But I hope that with an experienced guy like Ross Brawn in charge (of F1), there will be some decisions to change the situation," Wolff added.

In 2017, the French and Danish duo are paired together at the American team Haas.

Grosjean had a troubled F1 debut for Renault in 2009 when he was paired with Spanish double world champion Alonso, but since then he has shared teams with Kimi Raikkonen, Pastor Maldonado and Esteban Gutierrez.

"People have had the wrong perception of him, and he has surprised me.

"He is the best teammate I've had through my 'second' career in formula one," he added.

Formula 1's governing body, the FIA, has labelled Valtteri Bottas' getaway at the Austrian Grand Prix as a "fortuitous judgement" but confirmed that it was legal.

Bottas stormed away from pole position and Race Control 'noted' the potential of a jump start, though he was soon cleared of any wrongdoing.

It was revealed that Bottas had moved 0.201s after the five red lights went out, as he surged clear of the pack, en route to victory at the Red Bull Ring.

A replay of Bottas' start from his onboard camera, broadcast on the world feed, also showed his Mercedes W08 moving slightly before the red lights were extinguished.

However, the FIA clarified that drivers are permitted to make "very small movements" allowing for clutch adjustments, and explained the situation.

"We have found that need to allow for some very small movement, as drivers sometimes need to make clutch adjustments in preparation for the start.

"This system, which is dependent on the official timing provided by Formula 1, has been in operation for some 20 years and has proved extremely reliable in that time.

"In today's instance, Valtteri Bottas did not exceed this (very small) limit before the start was given.

"Simply put: he made an exceptionally accurate and fortuitous judgement call, anticipating the moment the lights went out with great precision.

"Any movement prior to the moment the lights went out was within the tolerances allowed."