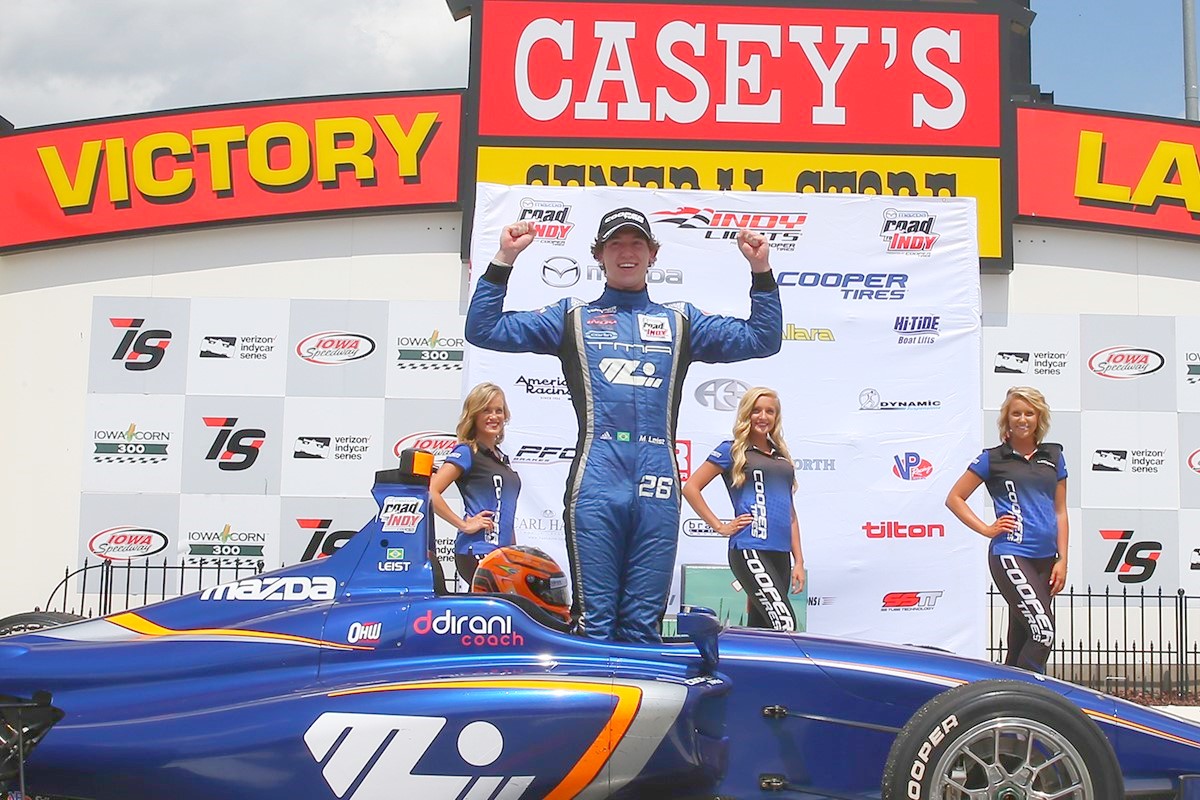 NEWTON, Iowa – Rookie Matheus Leist is quickly becoming an oval master, following up his Freedom 100 victory in May with his second oval win of the season – and third victory overall – in an action-packed Mazda Iowa 100 Presented by Cooper Tires race this afternoon. His victory marks the third consecutive run to the checkers for Carlin, who won at the super-fast speedway in 2015 with Max Chilton and Felix Serralles last year in Indy Lights Presented by Cooper Tires.

Qualifying was held earlier in the day with Colton Herta of Andretti-Steinbrenner Racing claiming his fourth pole to date and setting a new track record in the process with a two-lap average of 39.3279 seconds (163.670 mph). Carlin’s Zachary Claman DeMelo – who claimed his maiden win the last round at Road America – points leader Kyle Kaiser of Juncos Racing and Andretti Autosport’s Ryan Norman comprised the first two rows. Six drivers in total bested the existing track record.

Herta led through the opening laps but a brief four-lap caution on Lap 23, when Garth Rickards (Carlin) spun in Turn Two, set the stage for a complete shuffle at the front of the field. Leist, who qualified 10th and had moved into fourth at that stage, took advantage of a bunched up field and made quick work to pass Claman DeMelo for third, Kaiser for second and Herta for the lead.

The side-by-side action continued with Dalton Kellett (Andretti Autosport), who qualified fifth, moving into contention and a hard-charging Urrutia. With Leist comfortably out front, Urrutia and Kellett became the stars of the show. Urrutia, last year’s Indy Lights vice-champion, sliced through the field from an 11th place grid position and became embroiled in a great dual with Kellett for the second step on the podium which he solidified with 18 laps to go. Kellett, who set the fastest lap of the race and also earned the Staubli Award, crossed the line in third followed by Herta and Kaiser.

Although tied on positions gained, Leist claimed the Tilton Hard Charger Award as the highest finisher over Urrutia.

Kaiser’s point lead has been cut in half and he now maintains a 13-point advantage over Leist with Herta a further 35 points in arrears in third. In the Team Championship, Andretti Autosport and Carlin are tied, with the tie-breaker going to Andretti on more third-place finishes (four to three).

Indy Lights will return to action this week for a doubleheader Cooper Tires Indy Lights Grand Prix of Toronto Presented by Allied Building Products on July 15/16 at the challenging Toronto street circuit.

Matheus Leist (#26 TMA – Carlin): “I’m so happy. I think this was my best race this year. Of course, the Freedom 100 was great but I led the whole race. Here, I needed to move forward and I did. I’m so happy for the team – we needed to make some points today. It was a little tricky in the beginning, on new tires. When I managed to overtake Neil just before the yellow, I found out that the high line was perfect for me. When the race restarted, I ran the high line and everyone else was low so I think I passed three drivers in Turn One. I couldn’t believe everyone stayed on the inside. The car was just so good so I was able to open a gap, save my tires and get the win. It is a very difficult championship since everything here is new to me so I am being realistic. We’re in a good position now so if we can keep winning, we can keep fighting.

Santi Urrutia (#5 Belardi Auto Racing w/SPM): “We have been struggling, especially in qualifying, so starting in the back is difficult. But we found the speed for the race. I had a really good car today – I was able to pass on the inside early but then I realized the high line was better and found a good groove out there. It’s good points for the championship. But at the end of the race I did donuts because I thought I won! When I passed Dalton I thought I was leading because I never saw Matheus. I came into Victory Lane and my mechanics were happy, but not super happy and I didn’t understand why they didn’t park me inside the podium. Then they told me ‘Santi, you finished second.’ Now we’ll head to Toronto and try to figure things out and have a strong weekend. The championship is still alive – I am far back but it’s not over yet."

Dalton Kellett (#28 K-Line Insulators USA, Inc. Mazda – Andretti Autosport): “It just shows all the work the Andretti team has done this weekend. We have been fast all weekend, and in qualifying and the race we had a very consistent car. Santi, Kyle, Colton and I were able to run side-by-side at different moments, running two-wide around the whole track. We really focused on having a good race car and keeping the Cooper tires under us the whole race. There were some great battles all race long out there!"