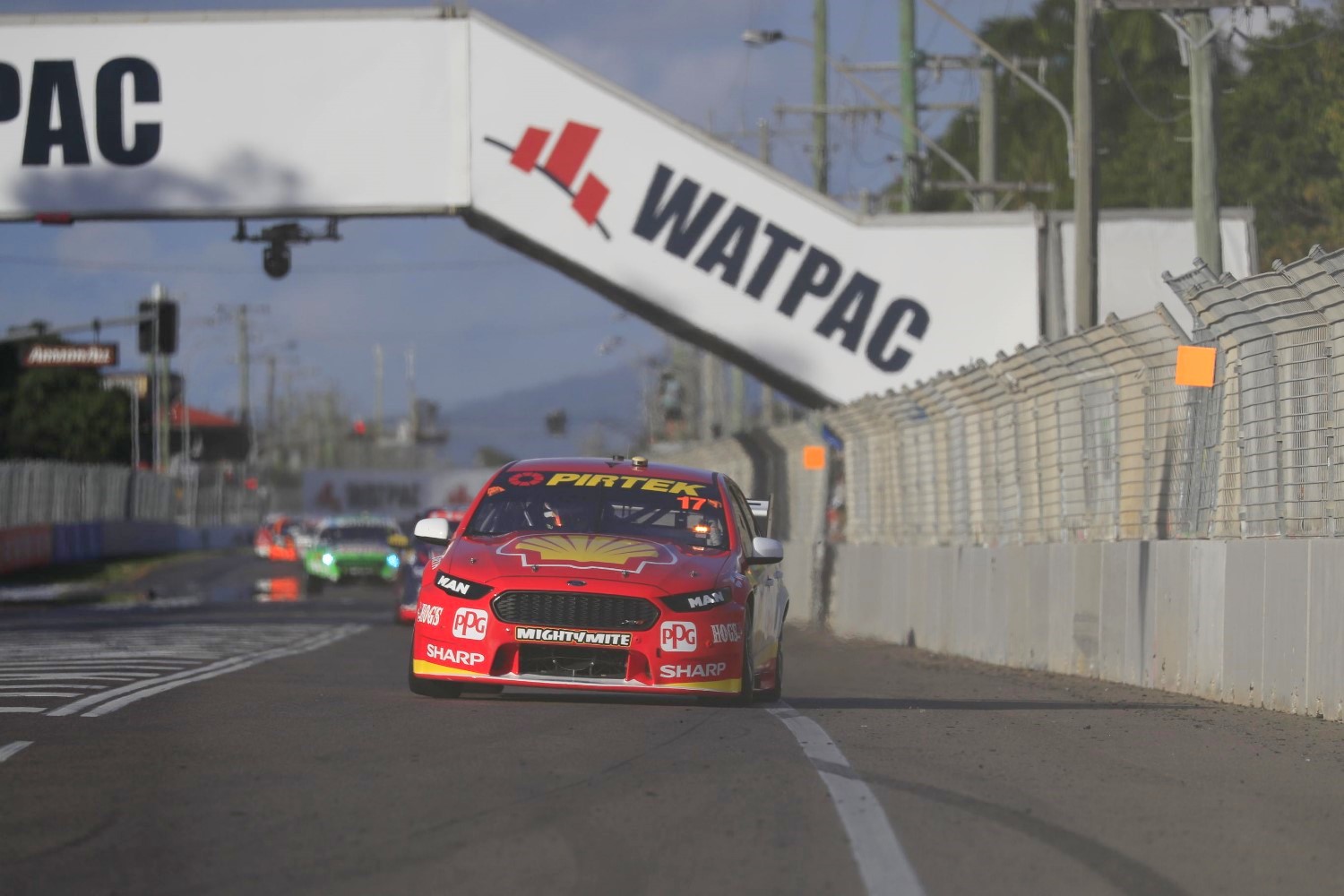 Jamie Whincup finally took his first win of the 2017 Virgin Australia Supercars Championship after a race-long battle with Scott McLaughlin at the Watpac Townsville 400.

Whincup and his Red Bull Holden Racing Team pulled a surprise by defeating McLaughlin and Shell V-Power, which had dominated the weekend to date.

“It took a while, but what a relief," beamed Whincup, whose team-mate Shane van Gisbergen finished third.

"Trying to get a win this year has been bloody tough. As always, it was tough again.

"Scotty’s thing's a rocket but we dug deep today. The guys did a great job.

"The car was quick and we gave it absolutely everything we had. I’d like to feel we deserved this one."

Pole-sitter McLaughlin had maintained the lead off the start, holding out David Reynolds at Turn 1 after a quick getaway for the Erebus Holden from third on the grid.

Whincup passed Van Gisbergen off the start and took just five laps to overtake Reynolds, who gradually dropped back to eighth by the time he made an early first stop.

Whincup meanwhile tracked McLaughlin and was just 1.5s adrift when the Red Bull entry made its first stop on lap 16.

McLaughlin pitted a lap later and emerged second after taking on six liters more fuel than his rival.

While that should have reversed the positions in the second stops, Whincup was able to ease away as the stint progressed, pulling more than three seconds clear.

The six-time champion lost ground when Chaz Mostert, on green tyros, un-lapped himself just prior to Whincup’s second stop.

McLaughlin this time ran two laps longer than Whincup and emerged one second behind with 26 laps to go.

“I lost my cool suit so that was tough, but well done to Jamie," said McLaughlin.

"He was consistent and it was only a matter of time. It was a champion drive and we had nothing for him."

Van Gisbergen had a quiet race, dropping from second to fourth with another tardy start before soon gaining one place back at the expense of Reynolds.

The reigning champion held an effective third throughout, eventually finishing 7.3s behind his winning team-mate.

It was another rough day for Fabian Coulthard, who is now 158 points adrift of McLaughlin in the championship after a 21st place finish.

Coulthard dropped from 12th to 17th on a hectic opening lap that included being elbowed off at Turn 6.

Bumping Tim Slade into a spin shortly after netted a 15 second time penalty at his first pitstop, dropping the #12 Ford out of contention for good.

The loser in that was Reynolds, whose race pace did not match his qualifying speed and eventually finished 11th.

Will Davison and Craig Lowndes took eighth and 10th after recovering from their respective qualifying efforts of 17th and 21st respectively.

Rick Kelly was 12th after losing time with a loose inner guard on his Nissan, while Cameron Waters was one place further back in 13th.

Tim Slade was the race’s only retirement, succumbing to engine failure on lap 26.