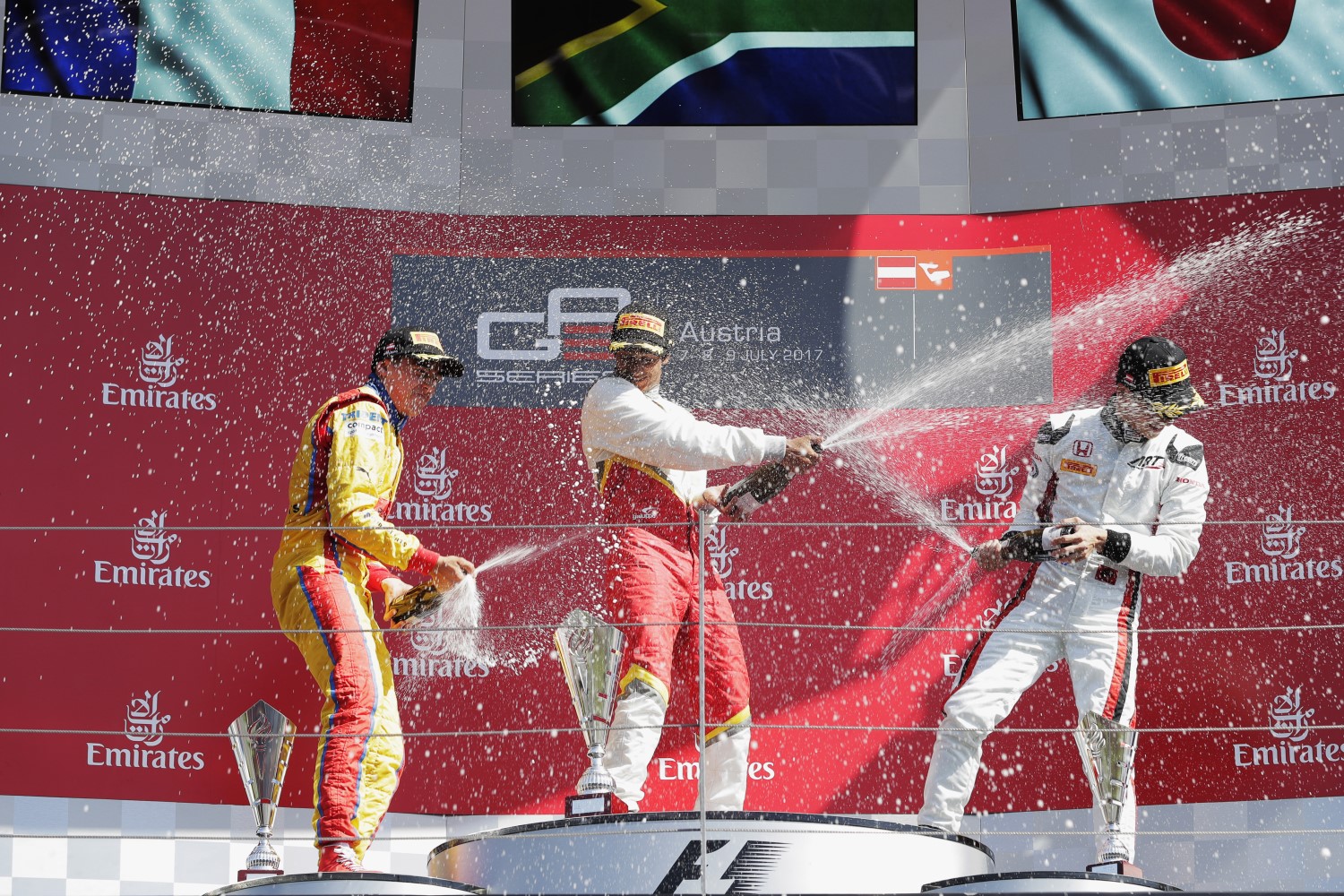 Raoul Hyman has opened his win account in the most emphatic way possible by crushing his rivals in this morning’s Race 2 at the Red Bull Ring in Spielberg, Austria, leading from lights to flag and controlling the race all the way through before easing off in the closing stages to win by a second from Giuliano Alesi and Nirei Fukuzumi.

The victory was set up at the start, with the South African making a blazing getaway from pole as the lights went out to easily lead the pack into turn 1, while behind him fellow front row starter Alessio Lorandi bogged down and couldn’t delay a strong getaway by Alesi and teammate Ryan Tveter, with the ART trio of Fukuzumi, Jack Aitken and George Russell just delayed enough into turn 1 to ensure the Trident pair had an easy run up to turn 2 to set up their first lap ahead of their ART rivals, Lorandi and Dorian Boccolacci.

Hyman and Alesi were clearly faster than anyone else today, with the pair pulling away from the rest of the field as the laps rolled down: Alesi tried to use his DRS to close on the South African but it was to no avail, as Hyman slowly pulled a gap over the Frenchman as he closed in on his first win. Behind them Fukuzumi was playing a waiting game as Tveter fell back into his grasp, and on the final lap he struck, using his DRS and better tires to steal the podium from the American.

But the attention of the paddock was elsewhere: Hyman was greeting the checkered flag just ahead of Alesi, with Fukuzumi, a gutted Tveter, a satisfied Aitken and Russell running line astern towards the finish, but behind them Boccolacci was looked to attack Lorandi after following him all race long: the pair came together and the Frenchman was airborne before landing in a lurid set of rolls from which he happily walked away, while Lorandi limped to the line in P8, with Anthoine Hubert picking up a few unlikely positions for 7th just ahead of him.

And with the weekend coming to a close it was Fukuzumi who now leads the Drivers’ Championship on 54 points, 1 ahead of teammate Russell with Hubert on 38, Lorandi on 32, Aitken on 28 and Hyman moving up to 25 points, while in the Teams’ Championship ART Grand Prix have built a big lead over their competitors with 159 points ahead of Trident on 60, Jenzer Motorsport on 54 and Campos Racing on 26 points ahead of next week’s round 3 in Silverstone.