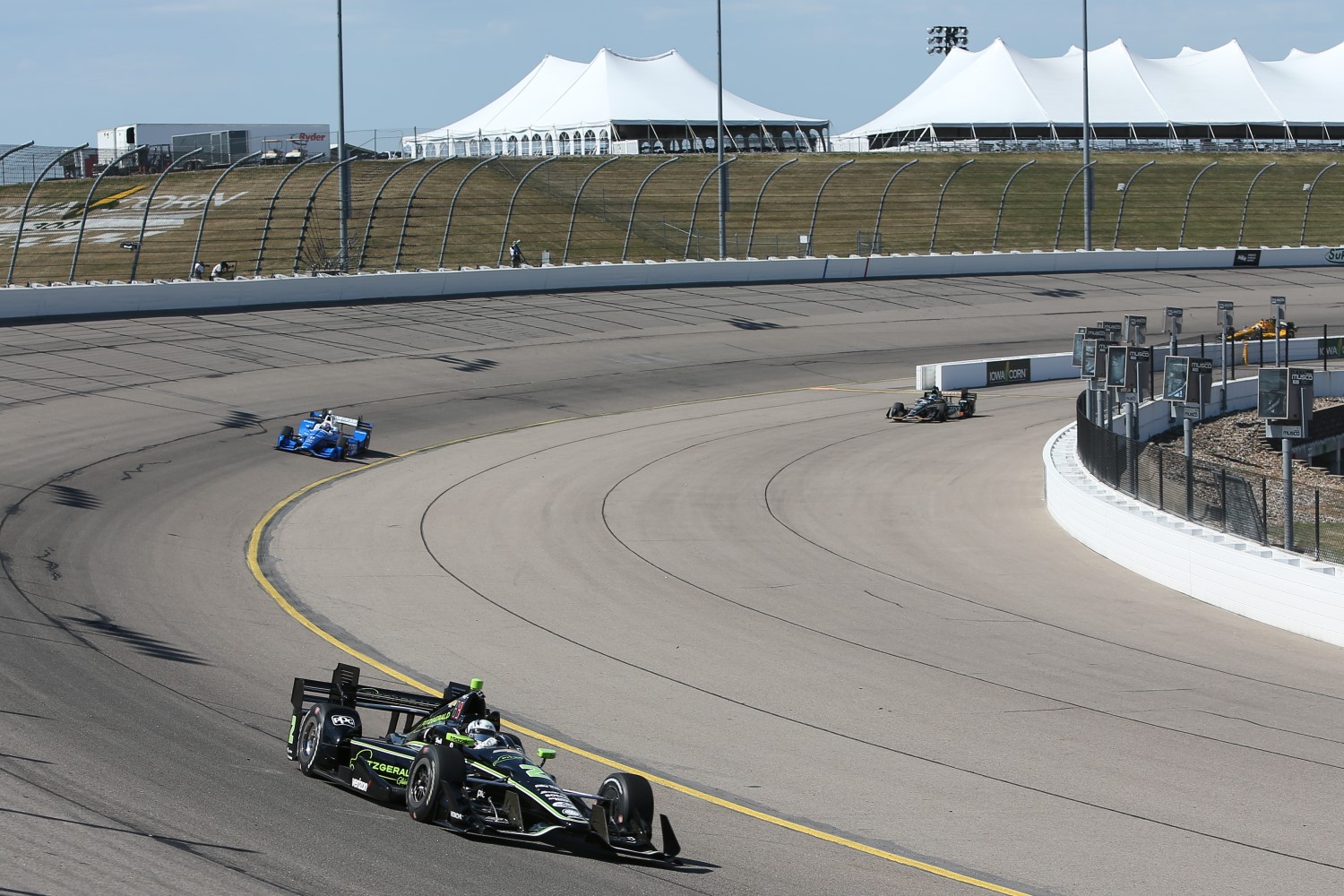 Team Penske waited until the end of the opening practice for the Iowa Corn 300 to make its presence known, but did so with triple the authority.

“We had a good first session," said Newgarden, who was running a qualifying simulation when he set the fast lap. "You always stay a little bit cautious, but it feels good. We needed work in the first session. … It wasn’t perfect, but I felt like we got it pretty damn good at the end of the session.

"We’ll see how we run in qualifying and, more importantly, the second (practice) session tonight. That will be a good indicator of what we have for the race. I feel pretty good about the Fitzgerald Chevy. Happy to be in it again."

Team owner/driver Ed Carpenter was fourth overall in the No. 20 Fuzzy’s Vodka Chevrolet at 184.137 mph. Marco Andretti, in the No. 27 Andretti Autosport Honda, ranked fifth at 183.975 mph. This was the only practice session scheduled prior to Verizon P1 Award pole qualifying this afternoon.

The tight confines of the 0.894-mile Iowa Speedway oval leave little room for running by oneself, so the practice speeds could be deceiving. Graham Rahal, in the No. 15 GEHL Honda, was 10th on the overall chart but posted the fastest lap without the aid of an aero tow, at 183.646 mph.

The lone incident came an hour into the session when JR Hildebrand spun and backed his No. 21 Fuzzy’s Vodka Chevrolet into the Turn 2 SAFER Barrier. The Ed Carpenter Racing driver climbed from the car with assistance from the Holmatro Safety Team and was taken to the infield care center for further evaluation.

Points leader Scott Dixon was 16th overall but parked for the final 20 minutes of the session by INDYCAR for a rules infraction by the No. 9 NTT Data Honda in the morning warmup practice on race day for the KOHLER Grand Prix at Road America on June 25.

Dixon missed the entire 30-minute session that day while his crew worked on a fuel-pressure issue in the team’s garage area. In an attempt to run a systems check lap at the end of the session, Dixon drove the car from the paddock to pit lane and entered the track 56 seconds after the checkered flag signaling the end of the session. Both are violations of the 2017 Verizon IndyCar Series Rule Book (Rules 7.2.9.1 and 7.9.1, respectively), in addition to a violation of Rule 9.3.1.7 for failing to obey the direction of INDYCAR.

In addition to the 20-minute penalty, Chip Ganassi Racing was assessed a monetary fine.

Single-car qualifying to determine the starting grid for Sunday’s race begins at 3 p.m. ET today and airs live on NBCSN. The action should be hot from the outset, as Pagenaud, Dixon and Newgarden drew the first three spots in the qualifying order. Power will be the last of the 21 drivers to make a two-lap attempt to determine the Verizon P1 Award winner.

A final 30-minute practice in race-like conditions starts at 7:15 this evening and streams live on RaceControl.IndyCar.com. Live coverage of the 300-lap race commences at 5 p.m. ET Sunday on NBCSN and the Advance Auto Parts INDYCAR Radio Network.

Take a few laps at speed around Iowa Speedway via Ed Carpenter's visor cam during the first practice.