Chaz Mostert signaled his intentions to return to the Virgin Australia Supercars podium by setting the quickest time in this afternoon’s second practice session for the Watpac Townsville 400.

The Supercheap Auto Ford Falcon driver, who is still the only Australian to record a race victory in 2017 following his victory at Phillip Island, was quickest this afternoon ahead of fellow Ford young gun Scott McLaughlin and defending Supercars champion, Shane van Gisbergen.

“It was a bit tricky. The car at the gate felt pretty reasonable," Mostert said.

“Once the tires heat up it obviously degrades a bit around here being a street track and being quite hot so it was a very hard to get an idea on the direction we needed to head.

“I think by the end of practice two we found something we were reasonably happy with so we found a few changes helped today but there were a few that didn’t as well.

“It was pretty humid out there at the moment. I didn’t wear a cool suit today so I am pretty cooked." 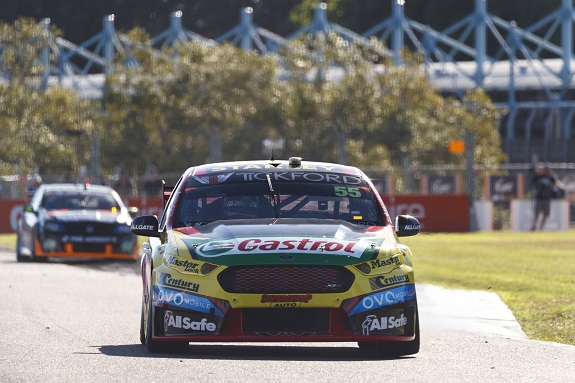 Van Gisbergen spun his Red Bull Holden Racing Team Commodore across the Reid Park track this afternoon, as drivers battled to keep grip in the warm temperatures of North Queensland.

“I have been in a lazy GT3 all weekend and my traction control failed," van Gisbergen laughed referring to his recent drive in the USA.

“I just spun it to keep it off the wall. I jumped around the left too high and I was going to go straight into the fence so I just flicked it right and stood on the gas so I wouldn’t crash the thing. Damage prevention."

All attention now turns to tomorrow afternoon’s opening qualifying session where the Shell V-Power Racing duo of Fabian Coulthard and McLaughlin will be looking to claim their team’s 9th pole position of the year.

McLaughlin and Coulthard have never won in Townsville despite both having previously claimed pole at Reid Park.

“We have to chase down Chaz [Mostert], he is pretty quick at the moment so will have a good crack at it tomorrow."

Qualifying gets underway at 12:30pm AEST on Saturday ahead of the opening 200km race at 4:10pm AEST. Qualifying, a Top Ten Shootout and a second 200km race will be held on Sunday.

Every practice, qualifying and race, as well as support categories, from the Watpac Townsville 400 will be broadcast live, ad-break free on Fox Sports 506 on Friday, Saturday and Sunday.

Network TEN will be broadcasting the Watpac Townsville 400 live from 12:00pm to 6:00pm AEST on both Saturday and Sunday. For the full TV Schedule, head to supercars.com/tv-schedule.

The Watpac Townsville 400 is proudly supported by the Queensland Government through Tourism and Events Queensland and Townsville City Council as part of the It’s Live! in Queensland events calendar. Queensland is just the place to experience Australia’s best live events.