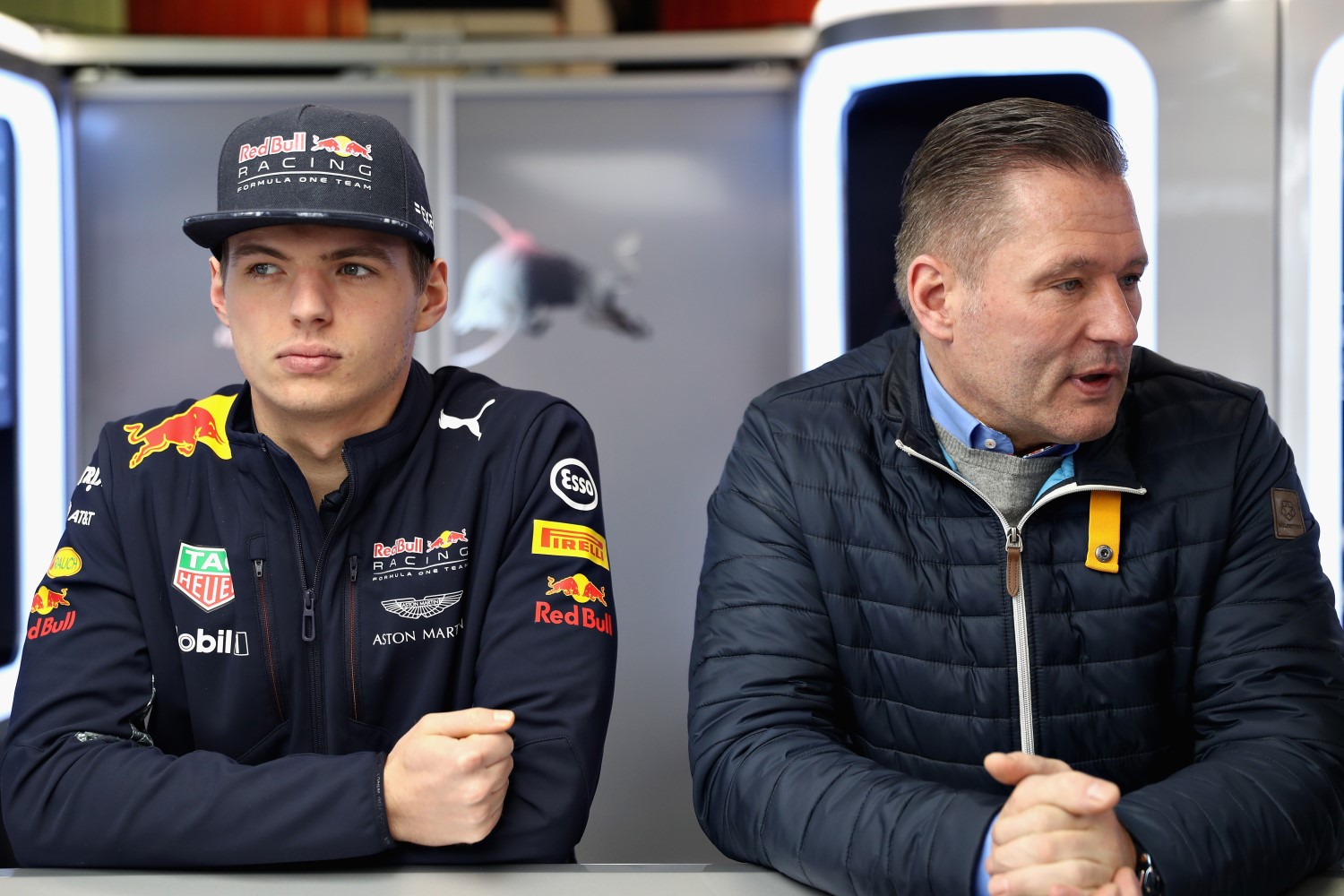 Jos Verstappen says son 'happy at Red Bull'
(GMM) Max Verstappen's father has denied the Red Bull driver is looking for a way out of his contract.

Amid rumors his clearly-frustrated 19-year-old son would like to accept a Ferrari offer for 2018, former F1 driver Jos last week said on Twitter that an explanation by Red Bull team boss Christian Horner was "bullsh*t".

Horner had said Verstappen's troubles with reliability were "through no fault of the team or the effort the team is putting in".

When a story about Jos' foul-mouthed response was written, the former Benetton and Minardi driver told the reporter: "Don't make your own stories. We are happy at Red Bull."

Indeed, Red Bull official Dr Helmut Marko told Kronen Zeitung newspaper that he is proud of the team's recovery after a difficult start to the season.

"As far as the chassis is concerned, we are probably the strongest team," he said.

"But we still have to work on reliability and also the engine.

"We have had six failures this season, and I'm especially sorry for Max Verstappen," Marko added.

(GMM) Fernando Alonso has admitted his teammate's introduction to F1 this year has been "difficult".

Amid his push for a more competitive seat, the Spaniard has regularly pointed out that he is a long way ahead of the occupant of the sister McLaren-Honda, Stoffel Vandoorne.

Indeed, there are even question marks about the 25-year-old Belgian's future at the team, with boss Eric Boullier saying Vandoorne needs to adapt more quickly to F1.

Alonso is quoted by Spain's El Confidencial: "It is difficult and frustrating for him.

"He does not know most of the tracks, so he's learning the circuits and everything about formula one but he can't test the car and often he is going into qualifying with no preparation.

"It is a difficult season for him and also for the team in general, and myself too. We hope to have a competitive car next year," Alonso added.

(GMM) Speculation is increasing that a technical controversy is behind Ferrari's sudden dip in form.

The Italian team was riding a wave of form this year until the last two races in Canada and Baku.

One suggestion is that an FIA clampdown about the adding of oil to fuel was specifically targeted against Ferrari.

"There is someone who is now with the silver team that came from the red team and knew what to look for," Red Bull team boss is quoted by Osterreich newspaper.

The implication is that Mercedes raised the alarm about the 'trick' Ferrari system.

"Even though Ferrari apparently lost some engine power due to the oil in the fuel story, Sebastian is the strongest in the races," the Red Bull official told Kronen Zeitung.

(GMM) Fernando Alonso has targeted a move into one of F1's two top teams for 2018.

That is the claim of Flavio Briatore, who still oversees the management of the Spaniard's career as he seeks a potential move away from McLaren-Honda.

"Fernando must go to Mercedes or Ferrari," he told Auto Motor und Sport.

"Renault is still a good distance from being a top team."

Briatore said it is a tough market for a top driver in F1, especially when compared to one of Europe's leading football players.

"There are ten attractive clubs in Europe," he said. "Messi would have a much wider choice. In formula one you can only win with three teams."

However, it is widely believed that Alonso will struggle to return to Mercedes or Ferrari, partly because of his reputation as a troublemaker.

"He instigated the problem at McLaren in 2007, and Mercedes had nothing to do with it at the time."

Former McLaren and Ferrari driver Gerhard Berger told Bild newspaper: "For every expert and fan, it is bitter to see a driver like Fernando fighting with dull weapons.

"On the other hand, Alonso left a lot of scorched earth behind him at Mercedes and Ferrari and has to take it on the chin if it doesn't work out," he added.

On Monday, which is also the Ferrari driver's 30th birthday, the governing body will meet to consider applying a further penalty for the infraction.

But former Ferrari and McLaren driver Berger told Bild am Sonntag: "I don't understand all the excitement."

And he also told Kurier newspaper: "I find the whole story good, because every fan has an opinion and that's what every sport needs.

"What we saw was two athletes with emotion, but no dangerous action. Both of them provoked, and both were punished — Vettel by the FIA and Hamilton by the motor sport gods with his headrest.

"The topic should be over and we move on," Berger, now the DTM series boss, added.

Italy's La Gazzetta dello Sport claims that if Vettel is given a race ban, Ferrari is threatening to boycott the race altogether.

"Sebastian is an emotional person, but I stick to what I said because with these formula one cars, the electric motor is also like a brake if you are not on the power.

"I say Hamilton provoked him, and please — this is not a girls' boarding school and the speed was not high," Marko told Kronen Zeitung newspaper.

However, Mercedes' Niki Lauda says the real issue is not Vettel steering into Hamilton, but the fact the German didn't apologize afterwards.

"To be clear: even the best professionals make mistakes," he told Welt am Sonntag newspaper.

"I think Sebastian is smart and experienced, but for him to take this hopeless and rigid stance against all the facts — I expected more from him," Lauda added.

No 'ultimatum' for struggling Palmer – Abiteboul

Rumors are rife that the extent of Briton Palmer's struggles to keep up with Nico Hulkwenberg means the team is considering dumping him mid-season.

"Jolyon must be able to make a contribution, but I have no doubt that he can.

"So I place no ultimatum on him. He and we know he can take this car into the points, and that's what he needs to do," the Frenchman added.

Abiteboul says Palmer's issue at the moment is himself.

"It is clearly a matter of self-confidence," he said. "He has not lost his qualities as a driver that we saw last year and in GP2.

"There have been reliability problems on his car and a teammate who is extremely fast, and he fell into a downward spiral. Now I want to protect him and his family," Abiteboul added.

So when asked if he can rule out dumping Palmer mid-season, Abiteboul answered: "At this time I rule it out.

"It is a hard time for him and for us, but we go through it together."

"As it turns out, he will get a formula one test in the Force India in the young driver test," Berger, who is the DTM series boss, told Bild newspaper.

The former Ferrari and McLaren driver said that at 22 years old, Auer is more than ready for the step into F1.

"I think two years ago, he would have been burned, but now he deserves his chance. Whether he uses it is another matter," Berger told Kurier newspaper.

However, Auer said at the DTM race at the Norisring at the weekend: "Nothing has been confirmed yet.

"I am in touch with a few teams," Speed Week quotes him as saying.

Auer drives in DTM for Mercedes and shares a sponsor (BWT) with Force India, but Mercedes boss Toto Wolff is also not quite ready to confirm the forthcoming test.

"You have to be cautious in formula one, but it looks good for Luggi," he said.

Force India team boss Vijay Mallya says that Sergio Perez and Esteban Ocon will still be allowed to "race freely", despite their collision in Azerbaijan.

Perez and Ocon came to blows after the second restart at the Baku City Circuit, with contact made when Ocon attempted a move on the inside of Perez at Turn 2.

Perez, whose car was severely damaged, ran outside of the top 10 following the red-flag, and ultimately retired with a broken seat, while Ocon salvaged sixth position.

Force India's intra-team collision followed on from a tense situation in Canada, where Perez refused to move over and give Ocon a chance to attack third-placed Daniel Ricciardo.

Mallya revealed that further discussions have taken place since Baku, reminding his drivers that "the team must always come first", though will not stop them racing.

"I can't remember a Grand Prix creating such a buzz and so many talking points as the race we saw in Baku," commented Mallya.

"We certainly played our part in a dramatic race and it's still frustrating to ponder what might have been had things played out differently.

"Since Baku we've had some conversations internally and reminded our drivers that the team must always come first.

"It's never acceptable for team-mates to make contact with each other and it certainly cost us points in Baku.

"However, the events of Azerbaijan won't change our approach.

"Our drivers can race freely and I'm sure they have learned some valuable lessons.

"We've given them a competitive car and I know they are mature enough to work together for the good of the team."

Mallya is hopeful that Force India's strong form will continue at this weekend's Austrian Grand Prix, as the team looks to strengthen fourth in the standings.

"This weekend in Austria will be another opportunity to show the speed of the VJM10 and continue our run of points finishes," he added.

"We need to keep up our momentum and scoring points consistently to maintain our fourth place in the championship.

"There is no room for complacency and we will keep pushing and trying to maximize every race."