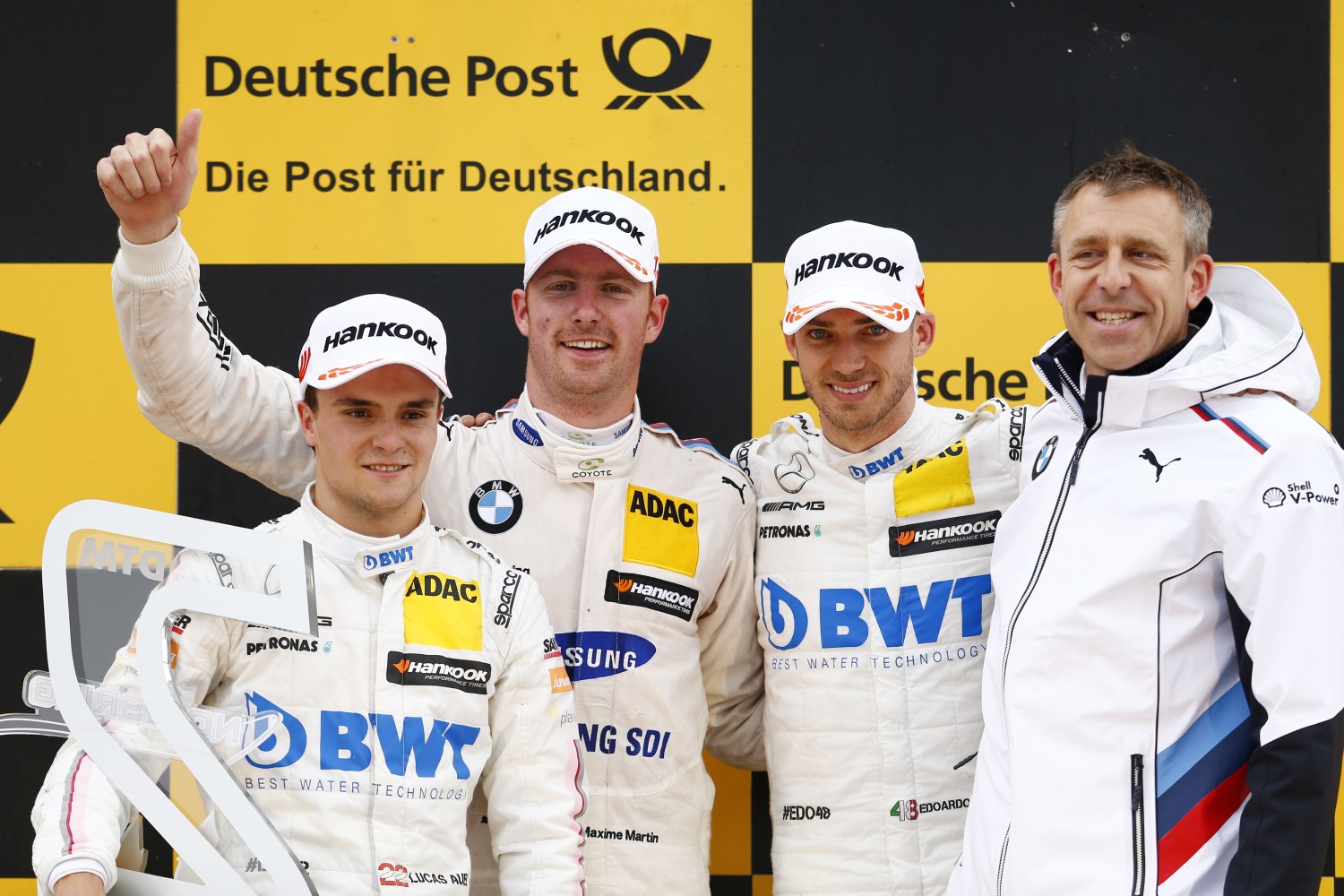 The second DTM race at the Norisring couldn’t be topped in terms of suspense: Maxime Martin drove his BMW M4 DTM to his first win of the season from Lucas Auer with the Mercedes-AMG C 63 DTM. The battle for third place was only decided on the final meters: Edoardo Mortara (Mercedes-AMG) came out on top in a photo finish with a margin of only two thousandths of a second against Mattias Ekstrom (Audi). The latter, in turn, was just 25 thousandths of a second ahead of local hero Marco Wittmann (BMW) at the finish.

The Sunday DTM race had to be red-flagged on lap 33 following a heavy accident. After contact with Jamie Green (Audi), Gary Paffett (Mercedes-AMG) hit the barrier in the run to the first corner, lost control of his car and collided with Mike Rockenfeller (Audi). Paffett and Rockenfeller were taken to the Klinikum Sud hospital in Nuremberg for examination. While the Brit walked away with bruises, Rockenfeller incurred a minor fracture of the fifth metatarsal on his left foot. After an interruption of approximately half an hour, racing resumed with 25 minutes remaining.

“After two retirements now finishing on the podium for the third time in a row is fantastic," Maxime Martin commented after the race. “I was able to use the potential of the car to the full and thus finally claim my first win of the year." In the closing stages, the Belgian was involved in a thrilling battle for victory with Lucas Auer. “I didn’t expect Lucas to overtake me after the restart," he said. “Fortunately, I was able to restore the order in my favor."

Auer was very happy with second place, particularly as he didn’t score any points in the three previous races. “In the opening stages of the race, I immediately managed to make up some positions," the Austrian reported. “Towards the end, I then had to deal with cramps in my left foot that I normally use to brake – and that at the Norisring, where braking is so important. Therefore, I am happy that I still managed to bring second place home."

Edoardo Mortara celebrated his first podium finish since becoming a Mercedes-AMG driver. “I will remember the final meters of this race for a long time to come," the 30-year-old is convinced. “The dash to the finish line three abreast simply was a crazy feeling. The fact that I came out on top in the end makes it even better. From 16th place on the grid, that wasn’t too bad."

After the eighth race, the battle for the DTM drivers’ title intensifies. Ekstrom is leading with 89 points just ahead of Auer, who has 87 points to his tally. Race winner Martin had a total score of 46 points at the Norisring and moved up to third in the standings. With Jamie Green (75), who finished eighth in the race on Sunday, and Rena Rast (72), two further Audi drivers follow in fourth and fifth place.

The ninth and tenth race of the 2017 DTM season will be taking place at Moscow Raceway in three weeks’ time from 21 till 23 July.