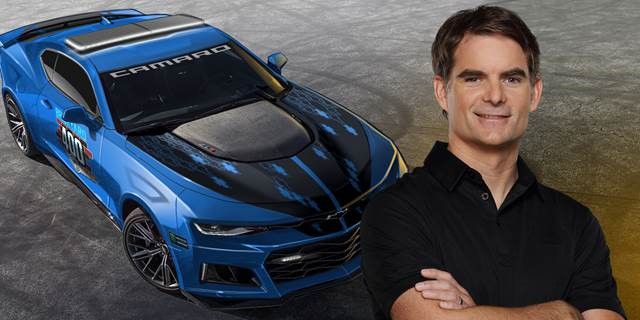 NASCAR legend Jeff Gordon will drive the 2017 Chevrolet Camaro ZL1 Pace Car to lead the field to the start of the 24th annual Brickyard 400 on Sunday, July 23 at the Indianapolis Motor Speedway.

California native Gordon, who grew up in nearby Pittsboro, Indiana, has served as a NASCAR analyst for FOX Sports since retiring full time from the Cup Series after the 2015 season. He competed in the 2016 Brickyard 400 for Hendrick Motorsports as part of a limited schedule while serving as a replacement for the injured Dale Earnhardt Jr.

“It’s hard to believe this is the 24th running of the Brickyard 400," Gordon said. “This has been a very special race over the years – for me and NASCAR. Winning at the famous Indianapolis Motor Speedway was a dream of mine as a kid. I'm excited to lead the field to green at this year’s Brickyard 400, and I appreciate Doug Boles and Chevrolet for giving me this opportunity."

The incomparable career of Gordon received a huge boost when he won the inaugural Brickyard 400 on Aug. 6, 1994 at IMS. It was the first race for vehicles other than open-wheel cars at the facility since 1909 and the first race of any kind at IMS other than the Indianapolis 500 since 1916.

“Jeff Gordon is one of the greatest drivers to ever compete at the Indianapolis Motor Speedway, and we’re honored to welcome him back to pace the 24th annual Brickyard 400," IMS President J. Douglas Boles said. “It’s only fitting Jeff will be out front and leading, a place where the fans of this great race are accustomed to seeing him."

Gordon will drive a 2017 Camaro ZL1 that features:

The only content separating the pace car from a production model is unique graphics and an integrated Whelen LED safety lighting system.

Chevrolet has a storied history with the Indianapolis Motor Speedway. Chevrolet was founded in 1911, the year of the inaugural Indianapolis 500-Mile Race, and company cofounder Louis Chevrolet, along with brothers Arthur and Gaston, competed in early Indy 500 races. Arthur Chevrolet competed in the 1911 race, and Gaston Chevrolet won it in 1920.

A Chevrolet has won the Brickyard 400 16 times, more than five times as many victories as the next-closest manufacturer.

“This year marks the 24th anniversary of NASCAR racing at the Brickyard, and it is truly special that Chevrolet has been there from the beginning racing and pacing," said Steve Majoros, director of marketing, Chevrolet Cars and Crossovers. “The Camaro ZL1 delivers unprecedented levels of technology and track capability, and we are proud to have Jeff Gordon behind the wheel of the Camaro ZL1 Pace Car."

Visit IMS.com to purchase tickets for the Brickyard 400 and Lilly Diabetes 250, and for more information on the complete event schedule.